A look at the games coming to Nintendo Switch 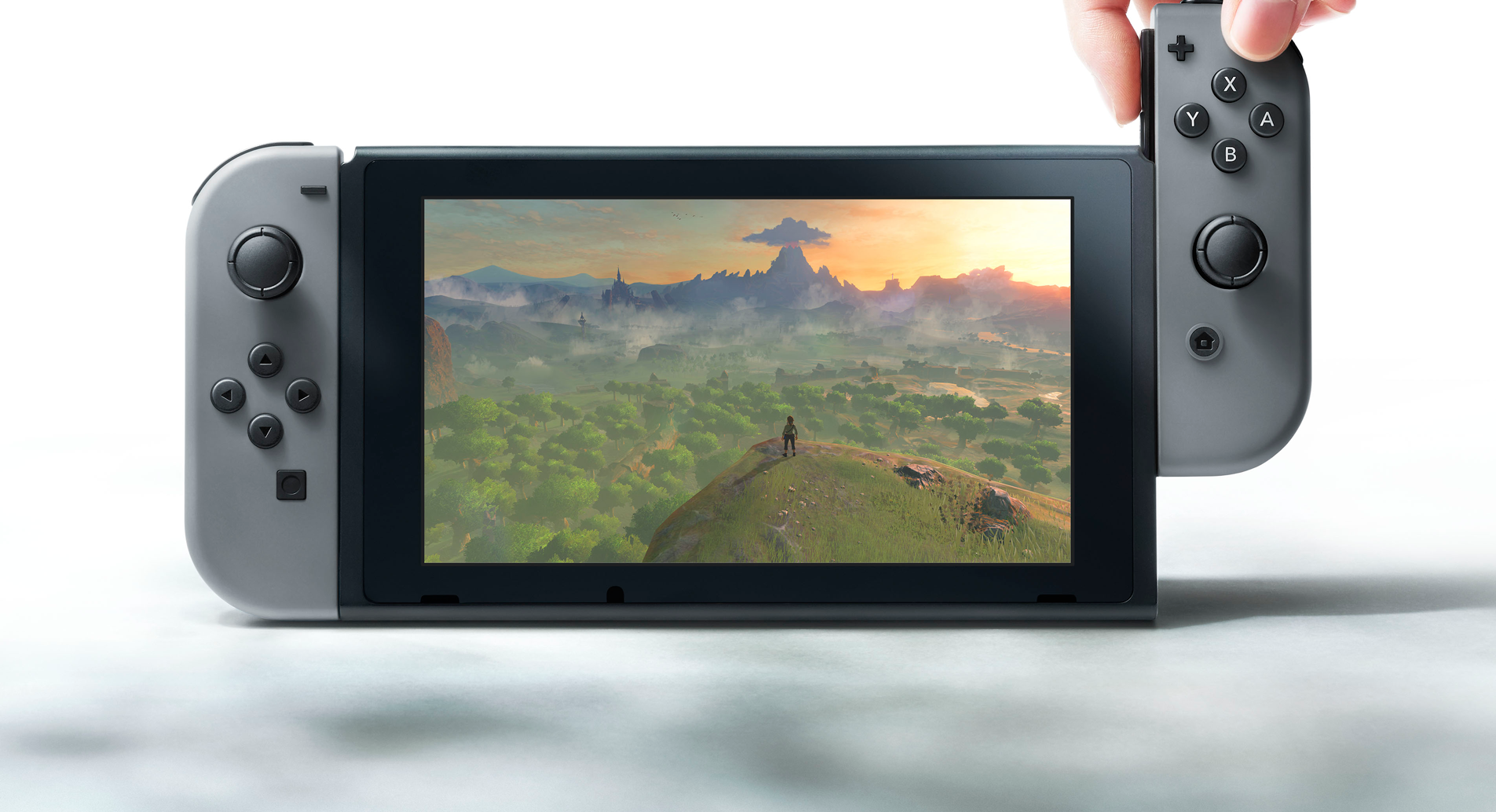 The Nintendo Switch is launching on March 3 with games 1-2-Switch and the highly-anticipated The Legend of Zelda: Breath of the Wild. While the latter’s open-world nature may provide long hours of entertainment, Nintendo isn’t hedging their bets on just two titles – there are now more than 80 games in development, from various first- and third-party publishers. Here are just some of them, sorted by expected release date.

The Legend of Zelda: Breath of The Wild

The latest Legend of Zelda adventure is also going to be the biggest in series history. It translates its origins as a humble exploration game to a vast, fully-realized 3D world that players can discover at their own pace. There are more than 100 Shrines of Triads to puzzle over, in addition to 100 years of history Link has to uncover amongst the ruins of Hyrule kingdom. The game is compatible with amiibo figurines.

Breath of the Wild will be available as a standard edition, Special Edition and Master Edition. The Special Edition (US$99) includes the game, a Nintendo Switch Sheikah Slate carrying case, a Sheikah Eye collectible coin, a Relic of Hyrule: Calamity Ganon tapestry and a weather-worn Map, and The Legend of Zelda: Breath of the Wild Sound Selection CD. The Master Edition (US$129.99) includes all of those items plus a Master Sword of Resurrection figure.

An evolution of Wii party games, 1-2-Switch utilizes the console’s two detachable controllers for activities where players look at each other, not at a screen. The trailer above shows how a gunslinging quick-draw mode works, while also providing glimpses of a sword fight, wizard duels, air guitar battles, and more. It’s a distinctly Nintendo game and a genuinely exciting one at that.

Who would have guessed we’d see a new game from Konami? The new aesthetic may upset long-time fans but its core gameplay remains the same: blow stuff up with Bomberman and his siblings. There is a 50-stage story mode with two-player co-op as well as an eight-player multiplayer battle mode, local or online. They’ve also added a new stage clear rule that requires more than just wiping out enemies, though Konami doesn’t specify what exactly.

Frozenbyte, the studio behind Shadowgrounds and the Trine series, are making their Nintendo Switch debut with a rogue-like strategy and action game called Has-Been Heroes. The player controls three characters that can combine “hundreds of different spells to create devastating combo effects,”  featuring a mixture of turn-based and real-time strategy combat. In terms of unlockable progression, the developers say that there are ” 300+ spells, 200+ items, 14
regions, and 12 heroes.”

Nintendo is calling Mario Kart 8 Deluxe the definitive version of the 2014 title, containing all tracks and characters from the Wii U version plus its subsequent DLCs. Joining the roster are new racers King Boo, Dry Bones and Bowser Jr.! Plus, as well as Splatoon‘s Inkling Girl and Inkling Boy. They’ve revamped Battle Mode to include Balloon Battle and Bob-omb Blast, with new courses such as Urchin Underpass and Battle Stadium, and returning ones like GCN Luigi’s Mansion and SNES Battle Course 1.

What’s more, players can now carry two items at a time, with returning favorites such as item-stealing Boo and high-jumping Feather. It supports up to eight players over local wireless, with a Smart Steering feature to help novices stay on the track, even in 200cc races.

Remember those toy boxing games where the fighters have extendable arms? ARMS is Nintendo’s take on it, set in a 3D arena with jumping, dashing, twisting punches, and a customizable cast of characters. Players can challenge the AI, compete against a friend in split-screen (requiring a second set of Joy-Con, sold separately) or local multiplayer (second Switch console), or simply fight other players online.

The Nintendo Switch is actually getting a new racer! Redout by Nicalis is a tribute to F-Zero, WipeOut, and Rollcage, set in the year 2560 where hurtling down magnetic race tracks is the galaxy’s most popular sport. Built on the Unreal Engine and fine-tuned for long draw distances and lightning quick rendering, Redout features architecture and terrain based on a reimagined Cairo, Alaska, and Abruzzo.

Nippon Ichi Software’s Disgaea 5 Complete brings together all of the content and DLCs from Disgaea 5: Alliance of Vengeance. This is a portable-friendly port of the PlayStation 4 title, which we praised in our review for its excellent combat system, humor, and abundant replay value. There’s a limited edition packing the game, an art book, a two-disc soundtrack, a clip-on Prriny, and a mystery item into a special collector’s box.

The surprise multiplayer hit is back, bringing new stages, new fashion items, and new weapons (“Splat Dualies”!) to this 4v4 battle for territory – Nintendo is promising even more of those after launch. Players can aim their shots using gyro controls on both the Joy-Con or the separate Nintendo Switch Pro Controller, while a smart device app adds voice chat functionality to the game.  Splatoon 2 supports both local and online multiplayer matches, either on the TV or on the go.

Link isn’t going to be only character enjoying in-game freedom. Super Mario Odyssey transports the iconic plumber from the 2D Mushroom Kingdom to new and mysterious places, all presented as a huge 3D sandbox. Bowser still has Princess Peach, of course.

Monolith Software announced Xenoblade Chronicles 2. Other than glances at the many environments that the RPG offers, there isn’t much information (from both the trailer and fact sheet) about the story or setting. All we know is that the game stars a new hero and that familiar names such as executive director Tetsuya Takahashi, character designer Masatsugu Saito, and composer Yasunori Mitsuda (among others!) are behind the game’s development.

The spiked hedgehog is primed to win back the hearts of his fans in Sonic Mania. The game features the iconic duo, Sonic and Tails, in pixel-style art and classic 2D gameplay with reimagined Zones and Acts from the earlier games (Sonic 1. 2, 3, and CD). It also has a kickass soundtrack, from what we’ve been hearing so far.

Atlus revealed Shin Megami Tensei Brand New Title (working title) for the Nintendo Switch. It’s a new game in the amazing RPG series that spawned Persona – and that’s all we know so far.  This is the “HD Project” component for the series’ 25th anniversary, the other being an as yet unannounced 3DS title.

Unfortunately, “Atlus USA currently has no information about a localization for this title.” Perhaps they’re gauging response by revealing it to Western audiences anyway?

Availability: To be announced

Some of the other games announced for the Nintendo Switch are Just Dance 2017 by Ubisoft; Skylanders Imaginators by Activision; EA Sports FIFA by EA; Ultra Street Fighter Ⅱ: The Final Challengers by Capcom; Fire Emblem Warriors by Koei Tecmo; Puyo Puyo Tetris from SEGA; and a new Suda51 project featuring No More Heroes character Travis Touchdown.

The suggested retail pricing for games has been revealed to be US$60 (S$86), at least in the US.

Ade thinks there's nothing quite like a good game and a snug headcrab. He grew up with HIDEO KOJIMA's Metal Gear Solid, lives for RPGs, and is waiting for light guns to make their comeback.
Previous post Nintendo Switch will launch worldwide on 3rd March for US$300
Next post Halo Wars 2 Blitz beta dated for Jan. 20–30