With central Oregon as its backdrop, players can expect “extreme weather conditions” and something the studio calls “The Broken Road, where you are forced to traverse over a wide variety of terrain — [this] includes forests, volcanic deserts strewn with lava rock, and snow-covered mountain passes.” 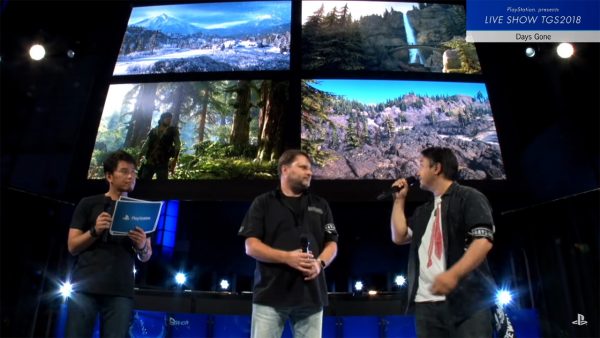 After playing a delectable new trailer, Reese was replaced by creative director John Garvin and game director Jeff Ross for a deeper breakdown. Days Gone puts us in control of Deacon St. John, a bounty hunter and mercenary “searching for a reason to live” in a post-pandemic world.

Garvin says that infected survivors, called Freakers, come in many types: Swarmers, Newts, Screamers, and Breakers, with the Horde comprising of Swarmers moving and acting as one. Initially, Deacon is unable to confront the Horde as he simply carries out his work, but Garvin reveals that it’ll eventually become “his mission to destroy them.” “Almost as deadly” are the hostile human survivors, though the most dangerous among them are the Rippers of the Rest in Peace cult. Bend Studio hasn’t forgotten about the animals either, as infected packs and flocks will attempt to kill Deacon too.

Touching on weather, Garvin says that rain will bring Freakers out and “make trails muddy and difficult to navigate,” while “snow and cold makes Freakers even stronger.”

As the game’s tagline puts it: “The world comes for you.” Garvin and Ross later followed things up with a 15-minute live demo of Days Gone, beginning with the ‘You Got A Death Wish’ story mission. It’s early in the game and Deacon must find a part for his bike. With stealth being a core mechanic, Deacon is shown climbing an overturned trailer to briefly survey the path ahead. With Freakers stalking the roads, he detours through a building – “all of our interiors can be searched,” adds Garvin – before briefly stopping to set a Freaker nest on fire.

The situation quickly turns hairy as a handful of Swarmers descend on Deacon, yet they’re more than enough to whittle our protagonist’s health away. The killing blow comes from what is presumably a child Newt, leaping off a rooftop to finish off the limping hero.

The second run goes much smoother, and we’re later treated to a glimpse of a “smaller Horde” of around 300 Swarmers. This time Deacon is better equipped with a machine-gun… or so you’d think. It’s best you see the result in action, since it effectively does look like a an angry, stirred up hive. Garvin reiterates that head-on combat is “not the smart way,” and instead leads the Horde to a construction site prepped with proximity bombs and other fun hazards.

Ade thinks there's nothing quite like a good game and a snug headcrab. He grew up with HIDEO KOJIMA's Metal Gear Solid, lives for RPGs, and is waiting for light guns to make their comeback.
Previous post TGS 2018: 12-minute extended look at Sekiro: Shadows Die Twice
Next post TGS 2018: Preview the impressive creation suite in Dreams (Universe)