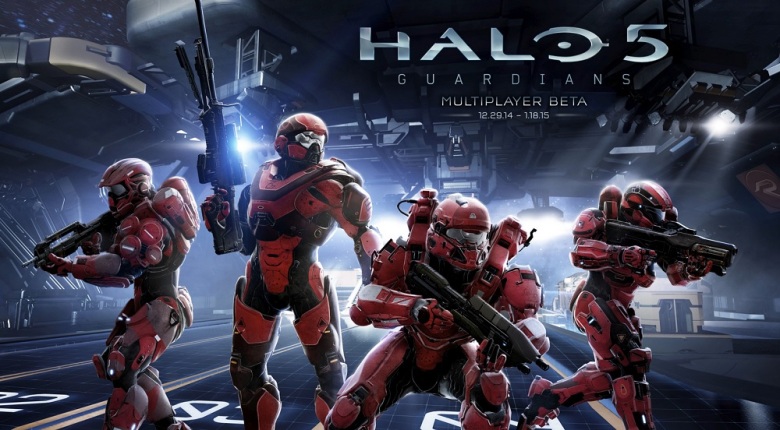 Halo 5: Guardians will be running on an all new engine, built form the ground up to take advantage of the Xbox One. While it was made in a time before the loss of the Kinect (Microsoft originally packed in a Kinect with every Xbox One), it probably won’t be hamstrung in any way now that Kinect integration is no longer mandatory. In fact, it might even perform better. To put it simply, Halo 5 looks gorgeous. While the Master Chief Collection gave us a glimpse on how pretty a high resolution version of Halo could look like, the graphical difference between the Spartan models in the Halo 5 beta and Halo 4 (on the Master Chief Collection as it’s a bit unfair to compare it to Halo 4 on the Xbox 360) are worlds apart. The texture work alone is on a whole new level when compared to the work done on the reworked Halo 4. Even better than that, the frame rate stays constant the whole time, with only a stuttering here and there in the initial stages as the players are loaded into the map.

But in the end, a game’s looks can only carry it so far if the gameplay isn’t up to snuff. In that regard, Halo 5 is safe. Whatever shortcomings it may have in the full retail release, if the beta is any indication of the multiplayer gameplay, it’ll be arguably the best multiplayer experience in the whole series (yes, even surpassing that of Halo 2). After all, Halo 5’s multiplayer seems to take all of the best parts from Halo 2 (the frantic run and gun, small tight maps, the balanced gameplay) and then mixes it with the customization options present the later Halo games.

Thus far, from what we know, the abilities like jetpacks or stealth capabilities have been given the boot. 343 Industries have made everybody equal. No more abilities unlocked only when you rank up to a high enough level. Now everything’s unlocked at level one. Halo’s ranks are still there, but this time they only serve to unlock cosmetic upgrades like new visor HUDs or armor pieces. We initially started with the Recruit armor but as we climbed up the ranks in the Beta, we soon got more and more armor pieces as we went up the Spartan Ranks, even netting the legendary Mjolnir Mark VI (the one Master Chief uses in Halo 4) armor set.

We’ve mentioned earlier that everybody’s on the same footing regarding abilities. What we didn’t mention is that some of them aren’t really new. There are a total of seven different abilities in the Halo 5 beta (though this might change in the final version). We’ve broken them down below:-

Sprint is basically running. You run really fast but you can’t shoot and your shields won’t recharge. It’s also infinite now and you can run around the whole map like a headless chicken on steroids if you choose.

A new move you can do only when you’ve been sprinting for a certain time (you’ll know you’ve run enough when there’s a brief flash on-screen). The Charge basically turns you into a battering ram. Anybody in front of you while you’re charging is splattered. It’s a one hit kill move but the trade off is that there’s a brief recovery time after the Charge and the Charge itself needs to be precisely aimed or it’ll miss. Charge uses the special ability meter so you can’t abuse it repeatedly.

This is just a fancy way of saying ‘aiming down the sights’ or zooming in. It was possible with certain guns in past Halo games (like the sniper rifle or the magnum pistol) but now it’s possible with all guns. Using smart scope doesn’t penalize your movement or abilities in anyway. You still move the same speed and can do the same things. Smart Scope allows you to zoom in to hit targets from further away, but the downside is that you get kicked out the mode once you get hit.

Another new move. You jump up in the air and then smash into the ground. If you hit anybody on your way down, they’re dead. Like Charge, it uses the special ability meter and it also leaves you vulnerable in the air for a few seconds as you build up the power needed to execute the move. You can aim in a limited area around you, but that’s the extent of movement choices.

Think of these as an emergency dodge move. A quick tap of the button and a direction and you’ll be immediately boosted in the direction you specify. It’s not something you can spam so you should only use this in emergencies. There’s also a secondary use of the pack in the the air. If you jump and then use Smart Scope, your Spartan will use your Thruster Pack to hover for a while, allowing you to aim and shoot while in the air. Of course, this makes you a prime target but it looks pretty cool. Of course, like most abilities, this one uses the special ability meter too.

This allows you to climb up ledges, provided you can reach them. Since there are no double jumps or jetpacks (anymore), Clamber will be your best friend as your navigate the multiplayer maps of Halo 5.

Sliding is done similar to Spartan Charge with one major difference, instead of of pressing the Melee button, you press the crouch button. If done right, your Spartan will immediately slide along the ground for a considerable distance, allowing you to rapidly close the distance on enemies who haven’t adjusted their aim.

That’s 7 new abilities you need to know to play well in Halo 5. We promised you 10 things, didn’t we? The rest are below:-

No Lunges
You do not lunge forward when you’re melee-ing somebody. In past Halo games, doing a melee attack while in close proximity with your opponent, your character moves a few steps forward so you don’t need to be right up to someone to bash them. Now you do. Make sure to adjust accordingly or you’ll end up being an easy target as you recover.

Prophet’s Bane is the name of the new energy sword. Now not only does the sword have a name, it also allows the whoever wields it to move faster. To compensate for that, it seems like the lock-on distance (to get the aiming indicator to turn red) has been dramatically reduced so you have to be much nearer to your foe before you can do the dashing instant kill attack.

Call Outs
Your squad will now call out the action automatically. You can have your whole team muted but you’ll still hear the A.I. call out if an enemy is flanking you or they’re under fire. Extremely useful to get a better read on the situation without listening to prepubescent teens on the mic.

And that’s that. 10 key gameplay related functions you should know about the Halo 5 Beta. Note that whatever is in this article is subject to change as 343 Industries tweaks and prods the beta to get it into final shape for the retail release. Also, if you have feedback about the beta you want to send to 343 Industries, you can use the Halo Channel app to send it.

(We tested Halo: Guardians multiplayer beta together with our comrade over at our sister site, www.hardwarezone.com)

Aaron Yip is an industry veteran with more than 15 years of experience. When not spending time on his gaming PC and consoles, he can be found in Hyrule solving ungodly puzzles and collecting gems.
Previous post Guess Who Made All of Assassin’s Creed Rogue’s North Atlantic Region?
Next post Dreamrocket Tosses Up A Quick Distraction for Android Wearables