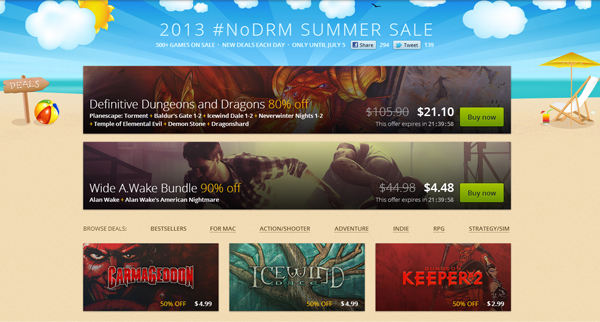 Singapore may not have the whole four seasons but with the recent haze going on, we’ve pretty much got our own version of summer. Here to help take our minds off the weather is GOG.com’s storewide sale, slapping great discounts onto a catalogue of DRM-free classics.

There’ll be new special deals each day up until 5 July, beginning with the Definitive Dungeons and Dragons pack at 80% off and Wide A.Wake Bundle with 90% off. Most people should already own the Alan Wake franchise thanks to the Humble Bundle and Steam sales not too long ago, which just leaves us with the first special offer to consider. It’s not a hard debate though; with games like Planescape: Torment, Baldur’s Gate and Neverwinter Nights it’s clear that this is a must-buy for any RPG fan.

What else does GOG store in their wondrous digital keep? Dungeon Keeper 2 for one, a timeless classic that modern games still fail to trump. There’s Freespace 2, which will serve as a great space sim fix until a certain Kickstarter project is realised. Don’t forget Heroes of Might and Magic III either, that shining beacon for turn-based strategy games. Oh and what about SHODAN in System Shock 2? Next-gen may be on the horizon but the past has plenty of great (and cheap!) gameplay to offer.

DRM-free games aren’t a concept of the past either. If Alan Wake wasn’t a giveaway, GOG also packs a few modern titles such as Strike Suit Zero, Omerta: City of Gangsters and The Witcher series – the parent company of Witcher developers CD Projekt RED started GOG in the first place.

There’s something for everyone and lots to (re)discover this summer sale, so make it a point to check back daily. You’ll have an online library of the games you purchase so redownloading will never be an issue. No activation limits and no always-online requirements – it’s all about the games.

Also, Torchlight is being offered for free only for the first 48 hours. Just add the game to your cart and checkout for the lovely sum of zero dollars. On a parting note: they have Mac games too.

Ade thinks there's nothing quite like a good game and a snug headcrab. He grew up with HIDEO KOJIMA's Metal Gear Solid, lives for RPGs, and is waiting for light guns to make their comeback.
Previous post Chaos Online Gets Its First Tournament, Registrations Now Open
Next post The SEA Major 2013 Is Nearly Upon Us