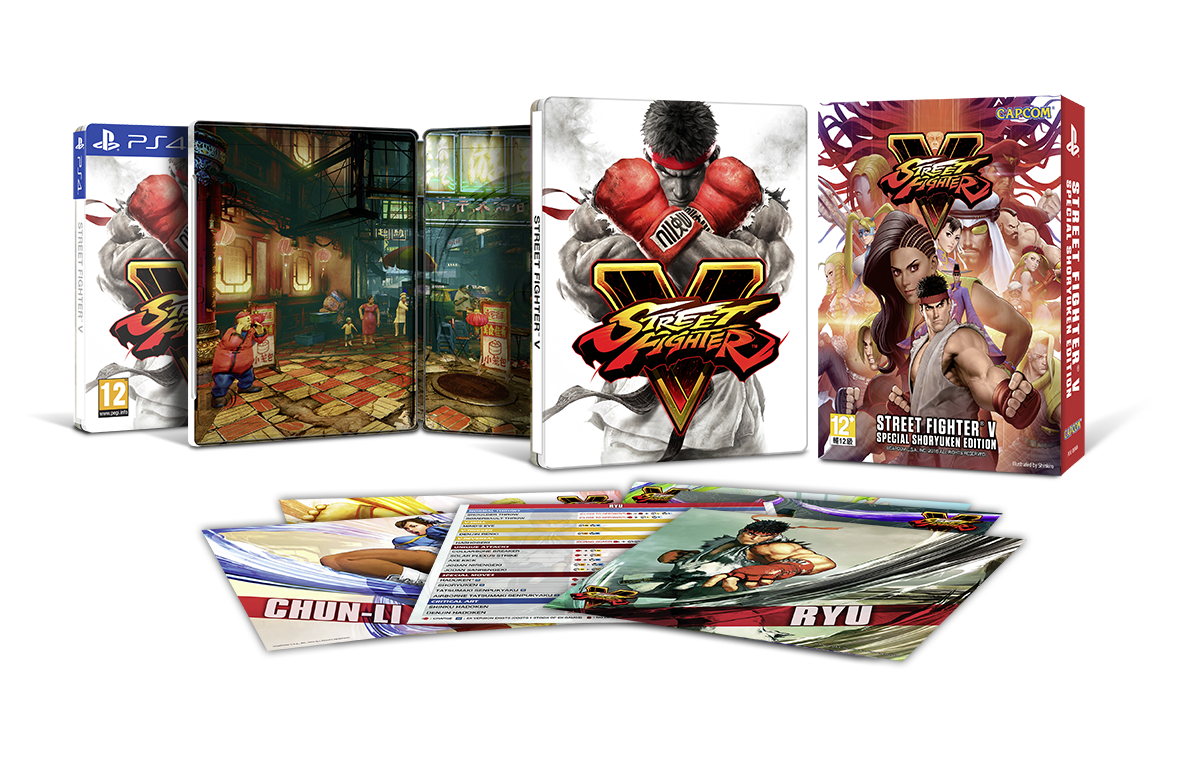 A new year signals a fresh start, and for fighting game fans that chance comes in the form of Street Fighter V. Capcom’s undisputed king of fighters unleashes in Asia on 16 February and even comes in a limited, region-exclusive Shoryuken Edition stuffed with goodies.

Street Fighter V will be available in three flavors for PlayStation 4: a S$71.90 digital download version with an Asian original theme; the S$74.90 standard physical version with a code for Battle Costume Cammy; and the S$89.90 Shoryuken limited edition featured above.

The Shoryuken’s steelbook is the same one used in the European release, produced in limited supply just for the Asian market. Inside is a copy of the game, an original Asian command list for 16 characters, and Battle Costume codes for Ryu, Chun-Li, Cammy, and M. Bison.

Also available is a collectible PlayStation Plus 12-month membership card featuring Ryu, bundled with a bonus card sticker for S$43.90 — the same price as a regular 12-month membership. The card hits retail stores on 19 February.

Street Fighter V updates the battle system by implementing a V-Gauge used for V-Skills, V-Triggers, and V-Reversals. This combo of mechanics, some of which are lifted from past titles, helps expand each character’s distinct fighting style. Be it mounting a legendary comeback with a last-minute V-Trigger or laying on the offensive with supercharged attacks, players will have more options to seize the match in their favor.

Those wanting better breakdowns can turn to the fighting game community for some in-depth videos, such as this primer by Bafael (via Shoryuken).

It’s also important to note that Street Fighter V will be the focus for Capcom Pro Tour 2016 and the company at large, unifying both resources and the players under one title.

The action isn’t restricted to solely PS4 owners, though. Street Fighter V is also coming to PC through Steam, in both standard and deluxe editions.

Here’s a timely reminder that Singapore has its own pro-circuit representatives: Team Razer’s Xian and Gackt.

Ade thinks there's nothing quite like a good game and a snug headcrab. He grew up with HIDEO KOJIMA's Metal Gear Solid, lives for RPGs, and is waiting for light guns to make their comeback.
Previous post Logitech ups its lighting game with the G502 Proteus Spectrum mouse
Next post Hitman changes release schedule again, now fully episodic