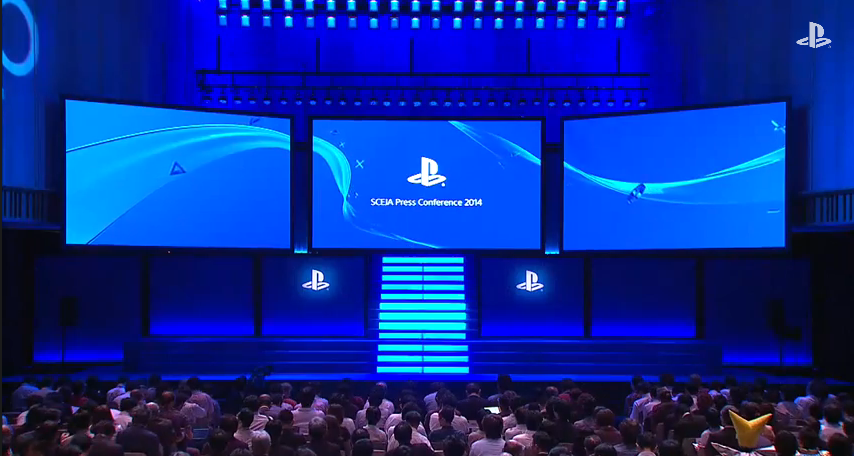 With PAX Prime and Gamescom behind us it’s time to set our sights on Tokyo Game Show 2014, set to take place this 18–21 September. Sony Computer Entertainment Japan Asia kicked things off early with a live-streamed press conference this afternoon, packing the usual array of teasers, trailers and announcements.

You can watch the English version over at Ustream, supplemented by content from the official website. Do bear in mind that not everything you see will be released outside of Japan. That said, read on for some of our highlights.

First up is action-RPG Bloodborne by From Software and SCE Japan Studio. Can director Hidetaka Miyazaki pull another Demon’s Souls, or will this be a completely new level of pain and reward? Japan will find out come 5 February 2015, though we suspect an international release for this PlayStation 4 exclusive isn’t far behind.

Atlus’ delectably mysterious Persona 5 is now confirmed for both the PS3 and PS4, accompanied by a new trailer revealing the protagonist, logo and a 2015 release. It doesn’t show much but perhaps the fans out there can come up with a theory or two.

Let It Die (formerly Lily Bergamo) has been pushed to 2015. Despite the changes and the loss of a female lead – as we found out during this year’s E3 – the game still retains the super-violent flair of a Goichi Suda game. Of course, whether the changes were necessary in the first place is up for debate.

Dragon Quest Heroes is coming to the PS3 and PS4 in 2015, marking the series’ long-awaited return to Sony consoles. Take the other piece of news as you will: the game is co-developed by Omega Force, making this a “musou” hack-and-slash experience. A Metal Slime version of the PS4 will also be available in collaboration with the game’s return. It even comes with a matching Slime accessory!

While Bladestorm: The Hundred Years War & Nightmare may look like a hack-and-slash at first glance, it actually bears more resemblance to Kingdom Under Fire 2. The Koei Tecmo game is a remake of the similarly titled PS3/X360 game from 2007 (also by Omega Force), this time with added content. Players control a single troop in a vast battlefield and must exert their tactical muscle to survive, level up, and win.

There’s no official trailer just yet so we’ll make do with this timestamp link for now.

Last in the spotlight is Resident Evil: Revelations 2 by Capcom. It isn’t exactly a new announcement but news of it might have been swept away by cynicism or the chaos of both Gamescom and PAX Prime. We only have a “concept trailer” so no gameplay footage at all. Nonetheless, the game has piqued some curiosity after Capcom promised that there’ll be something interesting on the showfloor in two weeks’ time. With the industry’s resurging interest in survival-horror, can we expect Capcom to step-up their game and provide something truly compelling?

If all else fails, at least we still have that incredibly unsettling Silent Hills game by Hideo Kojima and Guillermo del Toro. You really should download that P.T. demo if you own a PS4.

This new color scheme for the PlayStation Vita will be sold in Japan this November. No word of an international launch yet but the handhelds aren’t region-locked anyway. We’ll put up a separate post if we get any word on a local release.

Before we go here’s something new on the Project Morpheus front. Presented by Katsuhiro Harada of Team Tekken is a short demo of Summer Lesson. We’re not sure how best to describe it so here’s another timestamp link.

With Tokyo Game Show only two weeks away, the lead-up to October’s line-up of releases should pass by very fast indeed.

Don’t forget to check out either the stream or official website for the full list of games!

Ade thinks there's nothing quite like a good game and a snug headcrab. He grew up with HIDEO KOJIMA's Metal Gear Solid, lives for RPGs, and is waiting for light guns to make their comeback.
Previous post StarHub TV Anywhere Service coming to Xbox One At Launch
Next post App Assessment: Tiny Tower Vegas (iOS/Android)