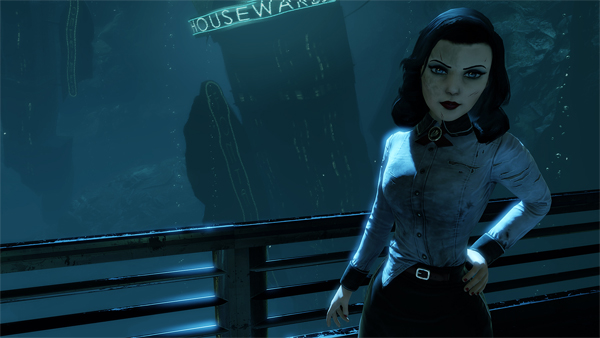 The first of the two-part Burial at Sea add-on for BioShock Infinite is now available for the PlayStation 3, Xbox 360 and Windows PC .

Burial at Sea brings players back to the city of Rapture on New Year’s Eve in 1958 – just a day before its fall from grace. Roaming the underwater city’s ruins in the first two BioShock games have been a highlight this past decade, which makes revisiting it, now in its intended grandeur, a treat all on its own.

But the visual spectacle isn’t all that Burial at Sea offers. Featuring an alternate timeline, Booker DeWitt is now a private investigator hired by Elizabeth to find a missing young girl named Sally. Revealing any more would be a disservice to its painfully short story, but there is a twist at the end of it all. It might sound obvious already to some but let’s keep the spoilers away!

Styled as a film noir in accordance with the add-on’s theme, it feels as if Irrational Games also wanted to preserve the dark memories of Rapture we already hold. Vigors have naturally been replaced by Plasmids, although there never was a huge functional difference to begin with. The real allure here is getting to fight the iconic Big Daddy using combat mechanics from BioShock Infinite.

As far as downloadable content go, Burial at Sea is a little pricey ($18.60) for the length it offers. This makes it one of those instances where buying the Season Pass, priced at $24.80, would be the far better choice. It’ll get you Episode 2 later on as well as the previously released Clash in the Clouds and Early Bird Special Pack, but don’t let those two take attention away from Burial at Sea – it deserves being in the spotlight.

Don’t have BioShock Infinite yet? Well then, holiday deals are just a few weeks away!

Ade thinks there's nothing quite like a good game and a snug headcrab. He grew up with HIDEO KOJIMA's Metal Gear Solid, lives for RPGs, and is waiting for light guns to make their comeback.
Previous post Pokémon X & Y Soundtrack Now on iTunes
Next post Sengoku Era Content Patch Comes To MapleSEA