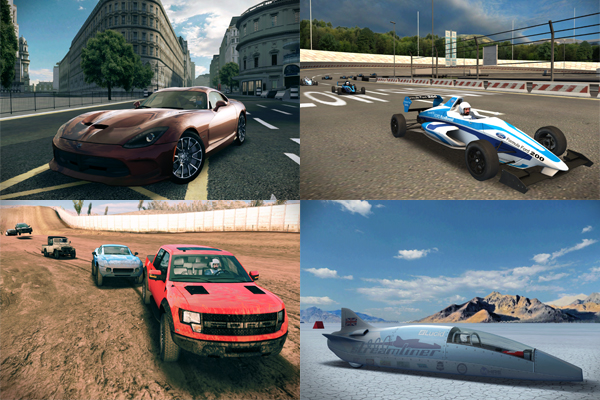 It takes a lot to stand out in today’s crowded app market, so that’s just what 2K and Lucid Games did when it came to their latest mobile offering, 2K Drive: they crammed a lot of content in. We’re talking about things you’d actually want, like a huge selection of cars, locations and events. Slap on precision controls and multiplayer options, and you’ve pretty much got the makings of a racing game that’d normally belong on a PC or console.

Lucid Games is a studio founded by the creators of the Blur and Project Gotham Racing series, so these developers know their stuff. Each car handles differently thanks to their real-life physics simulations, meaning that car choices actually matters. You’ll get to race more than 25 licensed cars in 2K Drive, so expect to see manufacturers like Dodge, Fiat, Ford, GM, Icon, Local Motors, Mazda, McLaren, Nissan and So-Cal. With more than 100 unique events, over 25 tracks and five different environments, it’s safe to say they’ve got a load of options at your disposal.

Since “connected” is one of the gaming buzzwords this year, 2K Drive will include a live newsfeed on all things automotive, complete with social media integration. More importantly, however, is the multiplayer component. We’re told it’s asynchronous, so no worries about a poor connection affecting those lap times. They’ve also included a tragically-named feature called “RaceFace”, which basically lets players “put their own face on their driver’s.” We’re hoping that means you just use the camera and not a surgical knife.

RaceFace actually looks kind of creepy, doesn’t it? In any case, 2K Drive looks absolutely fun for a mobile game. It won’t replace a racing set-up for the dedicated fans, but it should provide you and your friends with enough entertainment for a good while.

Ade thinks there's nothing quite like a good game and a snug headcrab. He grew up with HIDEO KOJIMA's Metal Gear Solid, lives for RPGs, and is waiting for light guns to make their comeback.
Previous post Sony Broadens Their Reach with the PlayStation Vita TV
Next post Square Enix Looks At Free-to-Play for Development Sustainability