Home / Latest / Games / PS Plus Jan 2017: This War of Mine TLO, Goat Simulator, Alienation, The Swindle

PS Plus Jan 2017: This War of Mine TLO, Goat Simulator, Alienation, The Swindle 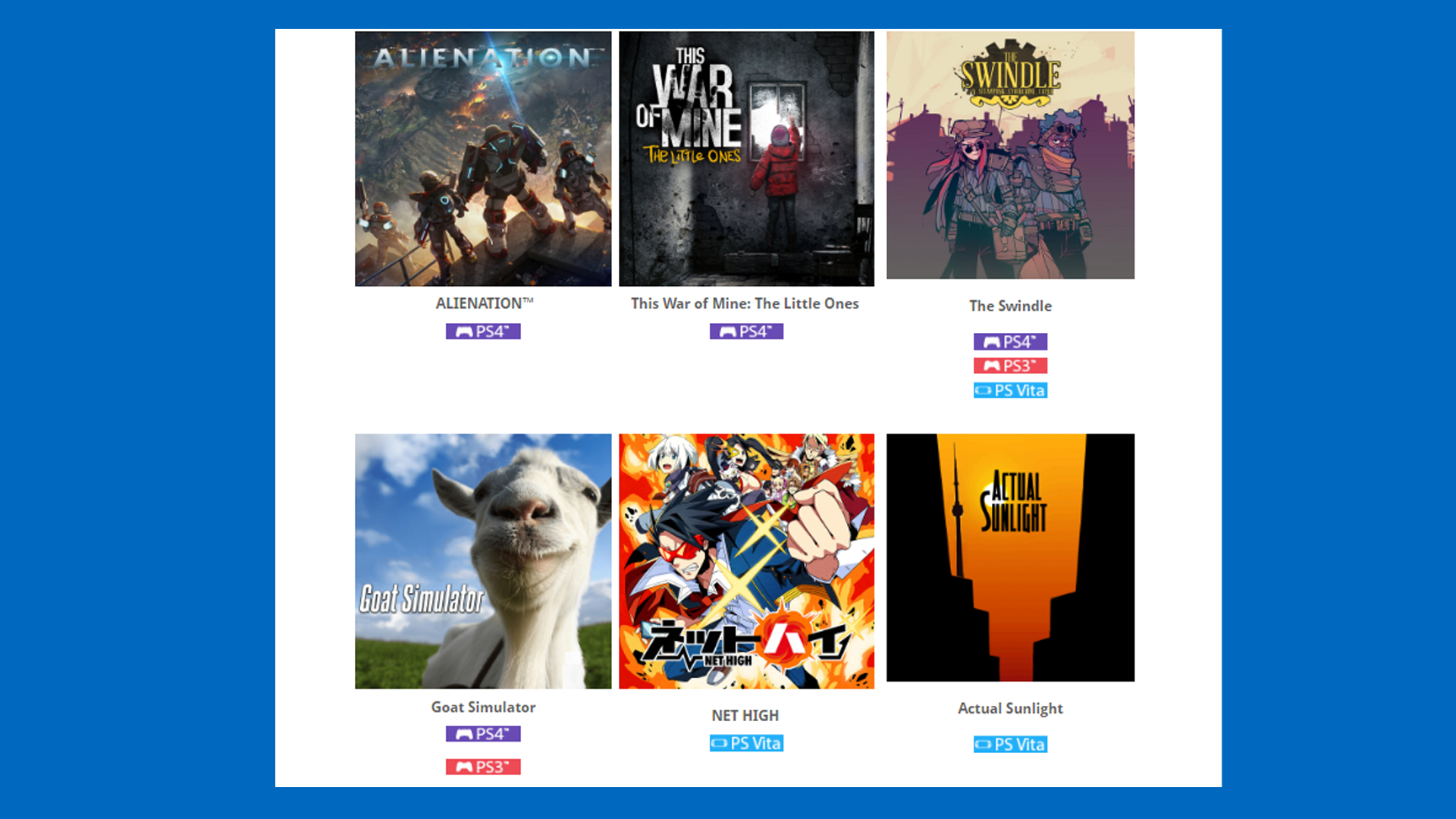 PlayStation is kicking off 2017 on a strong indie footing.

Sony Interactive Entertainment has revealed the free PS Plus games for January, with five out of the six titles offered (Asia region) coming from independent developers. Rest assured, the selection looks good.

This War of Mine: The Little Ones (PS4)

11 bit studios received critical acclaim with their 2014 hit This War of Mine, a survival strategy game focused not on zombies or military fiction but on civilians in an actual, human conflict: the Bosnian War. Specifically, it’s based on the Siege of Sarajevo, which lasted an unimaginable 1,425 days with over 13,000 people killed, 39% of which were civilian. Not exactly light-hearted entertainment.

Players control a group of civilian survivors in a makeshift shelter and must make do with whatever supplies scavenged at night – snipers control the day. Each survivor has their own traits while their actions, dictated by the player, determines the ending to their tales.  The Little Ones DLC takes the dilemma to new heights by adding children.

If wartime hell is too heavy for a new year’s opening (especially after a grief-riddled 2016) then perhaps this goat should take charge instead.

Coffee Stain Studios’ little game started as a joke prototype before swelling into a YouTube and Twitch sensation. Essentially, players control a goat whose sole objective is to wreak havoc on property. The physics are intentionally poor, Easter eggs are hidden everywhere, and glitches highlight the absurdity of it all. It’s gratuitously stupid, funny, and home to some genuinely amazing DLC.

Indies have successfully kept the twin-stick shooter flame alive and Housemarque’s ALIENATION is a bright example. It doesn’t attempt anything original, standing firm by the genre’s holy trinity of enemy aliens, upgradeable weapons, and player skills, but it does a bloody good job at the basics.

It also greatly benefits from having 4-player cooperative support (drop-in drop-out) for all its modes, in either online or local multiplayer. And once the campaign is over, there’s plenty of end-game content for you to squeeze out of ALIENATION.

Size Five Games describes The Swindle as “a steampunk cybercrime caper about breaking into buildings, hacking their systems, stealing all their cash, and quickly running away again before the police show up.” It’s a departure from the point-and-click adventures the developer grew famous for, taking cues from titles such as Gunpoint instead.

Wearing the “tough but rewarding” mantle often awarded to indie Rogue-lites, The Swindle blends action and stealth with resource management and procedurally-generated buildings. The fact that the levels aren’t handcrafted means it won’t compete with the best in stealth, but don’t let that stop you from experiencing this little gem.

Developed by Marvelous, NET High is a Japanese investigative adventure game not unlike the excellent Ace Attorney series. It sports a brilliant setting too, where the population communicates on a government-monitored social network called ‘Tweeter’, reminiscent of China’s real-world counterpart Sesame Credit.

Our job is to deal with the internet trolls and people boasting fake follower counts, which normally sounds depressing. Thankfully, this isn’t real life and we get a colorful cast of characters to interact with, one of whom may as well be a clone of Gurren Lagann’s Kamina.

The bad news is that it’s still in Japanese. The good news is that localized English trophies have appeared (via Gematsu), which means a Western release is on the horizon.

Now this is where it gets depressing. Quite literally, in fact, as Actual Sunlight deals with suicide and mental illness. If This War of Mine didn’t seem appropriate for showing off to kids or relatives during the New Year then this is in a whole other league.

The thing is, Actual Sunlight is well made. Terrifyingly so. It’s the sort of game you’d hesitate to even recommend, for it delves into the mind of someone trapped in a loop of self-destruction. As a visual novel with plenty of reading (the developer is a professional writer), it’s easy for the game to be dismissed by the “edgy” crowd or those wanting no-nonsense action from their games. If, however, you have the mental fortitude to wade into a simulation of clinical depression, then please do give it a try. You won’t like the main character; neither will he.

PlayStation themes featuring Toro and Gravity Rush 2 will be available for download starting 17 Jan. On the other hand, The Final Fantasy XV Original Soundtrack is out now and will remain free until 28 Feb.

Ade thinks there's nothing quite like a good game and a snug headcrab. He grew up with HIDEO KOJIMA's Metal Gear Solid, lives for RPGs, and is waiting for light guns to make their comeback.
Previous post Newstead trade-in roadshow now on at Marina Square, 20% donated to charity
Next post Free FIFA Online 3 tournament and workshop with Team Impunity on 31 Dec