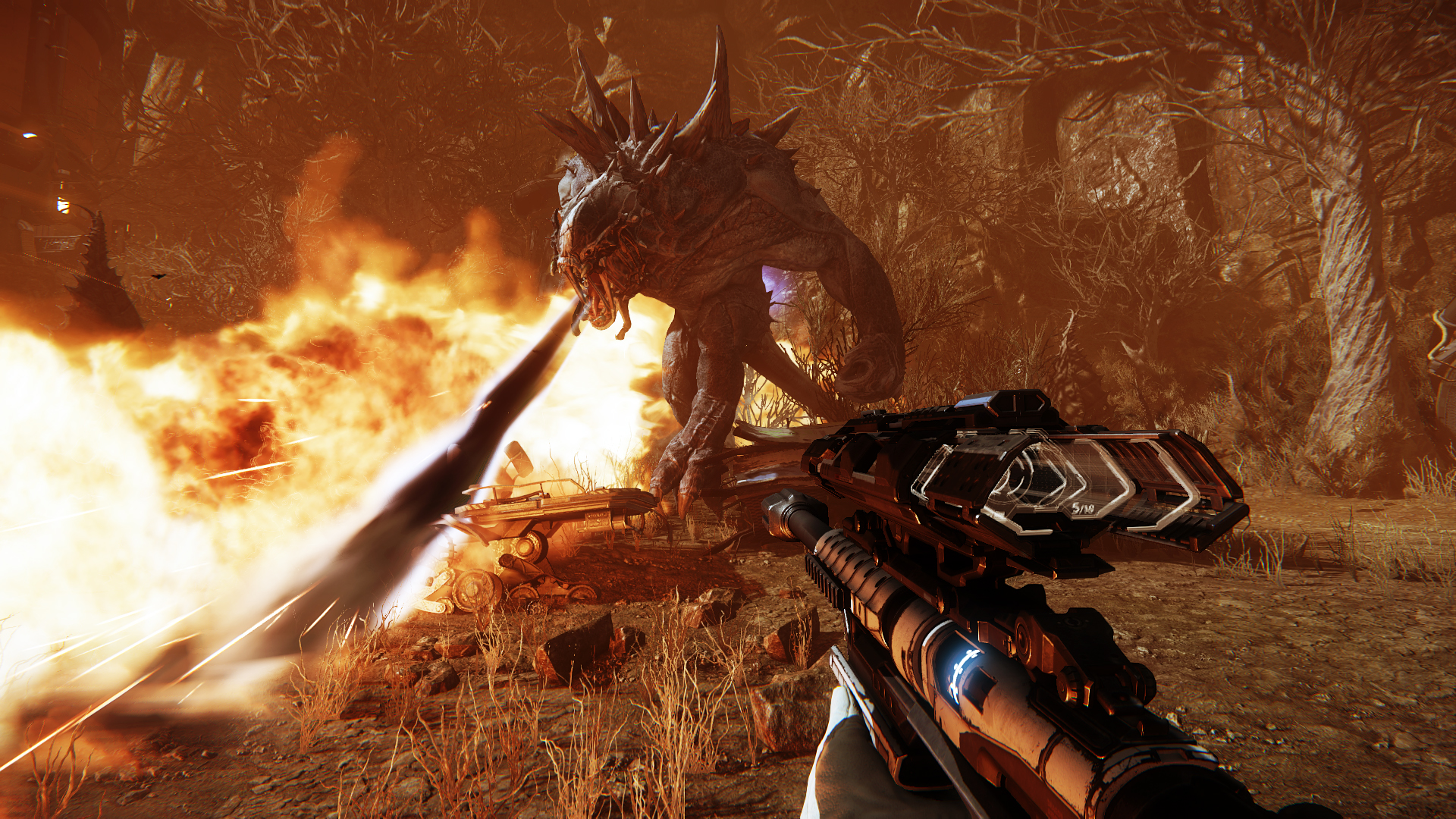 Be you Man, or Monster? We got a hand at 2K Games’ upcoming 4v1 multiplayer game, Evolve.

Turtle Rock Studios takes us to another world where a facility is being threatened by an alien capable of growing through its insatiable appetite for the local wildlife. Standing in its way is a team of four specialised hunters, the assault class, the trapper, the medic and the support class.

Evolve takes several pages from their previous hit with Valve, Left 4 Dead, and builds upon it. At first glance, it feels like a team of four against a Tank, except the Tank can evolve and become more vicious and devastating in its attacks. Fail to stop it and the player-controlled monster will grow to its maximum third evolution, ready to take on anything that can threaten it.

The early build we were served with had Team Hunter jettisoned from an airship to protect a generator. Naturally, the only objective is to hunt down and kill the alien before it has a chance to escape and feast to grow. A breakdown of the four classes are as follows:

Assault Class (Markov)
He has the assault rifle for long-range and the lightning gun for close-combat. He can also lay out mines and shield himself to go face-first into the monster’s grasp, guns-blazing.

Trapper Class (Griffin)
True to an Australian-style animal hunter, Griffin has the ability to drop sound sensors to detect if the monster has been walking by recently. Griffin’s forcefield dome can be deployed to ensure the hunted has no where to go while the rest of the team pummels him with their firepower. The trapper class also has a harpoon gun to hold the slow the monster down.

Support Class (Hank)
A blend of attack and defence, Hank can shield other players with his gun and call in an aerial strike from above (tactical satellite?).

Medic Class (Val)
With a healing gun and the ability to heal nearby players with a blast of health. Val also cracks open weak points on the monster with her sniper rifle. Val also has the tranquilliser gun to slow down the monster down as well as mark it green for the team to detect it.

That does sound like a one-sided battle, but the monster, in this case, Goliath has the ability to throw rocks, breathe fire and charge at other players. But while at its weakest, the monster’s best bet is to make a break for it through stealthy steps and gather other animals to beef up and become stronger before it can vent its rage on that annoying generator.

Camping is also a big no-no in this game. Inactivity will cause the game to gradually end if the monster decides to hide and wait it out, giving the victory to the Hunters.

The current team of four hunters and one monster is just a taste of what Evolve will become, as the full game has a larger roster of vicious monsters and other members of the alien hunters with their own specialised weapons, although teams can only have one member of each class, so gameplay will always be asymmetrical for the humans. Gameplay will also be expanded across several other “arenas” and environments.

2K Games promises single-player modes against the AI for “practice”, but we all know being introverted about the game is really the bare minimum of fun. We are expected back for another round when the game “evolves”.

Evolve will be available for Windows PCs, PlayStation 4 and Xbox One this autumn.