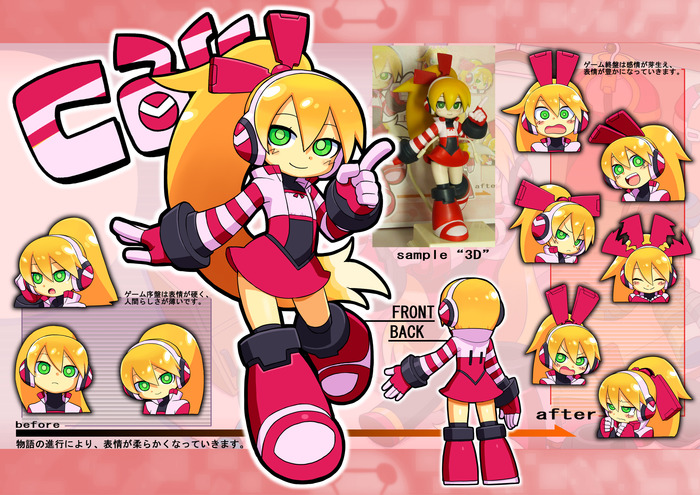 The votes are in! In what was ultimately a close fight, Kickstarter backers for Mighty No. 9 have chosen the design for the game’s heroine, Call.

Comcept’s announcement reveals that the winning design (pictured above), created by Yuuji Natsume, emerged victorious by only a 2% margin. That’s created a lot of disappointed fans as a result but such is the nature of competition. For comparison’s sake, you’ll find the second-place entry below: The nine designs were first presented to the community in September. According to character notes, Call was originally created to assist with Dr. Sanda’s research; only after avoiding the virus infections did she pledge to help the protagonist, Beck. It’s also noted that Call “was not imbued with the human characteristics that make Beck unique, so she’s more of a pure robot”. A little strange considering the breadth of facial expressions she has but Mighty No. 9 seems charming enough to accommodate them.

Helmed by Keiji Inafune and other Mega-Man veterans, this spiritual successor to the Blue Bomber was successfully funded on Kickstarter to the tune of US$3.8 million. Expect to run, jump and blast your way to victory once Mighty No. 9 (hopefully) releases in 2015.

Ade thinks there's nothing quite like a good game and a snug headcrab. He grew up with HIDEO KOJIMA's Metal Gear Solid, lives for RPGs, and is waiting for light guns to make their comeback.
Previous post You Can Now Play Vintage Console Games on the Web
Next post Mod DB Names Their 2013 Mod of the Year