Prepare for Titanfall on March 2014, US$250 Collector’s Edition Shown [Updated] 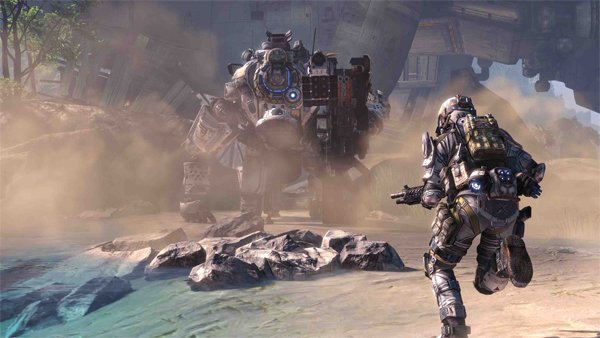 Running towards a hulk of metal falling from the sky doesn’t usually pass off as a good idea, unless you live in Respawn Entertainment’s Titanfall. EA have now announced that the steel rain begins as early as March 2014.

Players will choose to fight for the Interstellar Manufacturing Corporation (IMC) or the Militia, either as a jetpack-wielding trooper or seated snugly behind the controls of a titan. Fun fact: those terrifyingly agile beasts of metal stand at 7 meters tall. I wouldn’t call them invulnerable though, as we’ve seen plenty of footage where they’re reduced into smoking debris by a single person.

The way Respawn’s approaching the campaign is fascinating too, since it all takes place during the multiplayer matches. Here’s some old gameplay from August:

EA have also taken the opportunity to announce a Collector’s Edition which comes in at a jaw-dropping £249.99 (SG$500).

(Update: Seems like Europe’s getting the short end of the stick once again. The price for the Collector’s Edition is also listed as US$249.99, which converts to around SG$310. Still awfully expensive, but there you go.)

Half a grand would specifically get you an 18” diorama dotted with LED lighting, a full-size art book with over 190 pages of “rare concept art”, and a full-size schematic of an Atlas titan, presumably to inspire future engineers.

Ade thinks there's nothing quite like a good game and a snug headcrab. He grew up with HIDEO KOJIMA's Metal Gear Solid, lives for RPGs, and is waiting for light guns to make their comeback.
Previous post WWE 2K14 Gets DLCs and Season Pass
Next post The New Threat Behind XCOM: Enemy Within