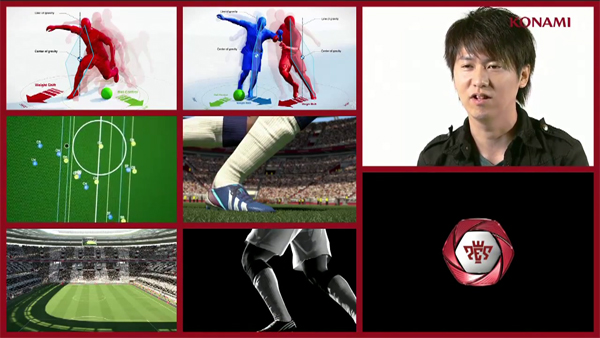 The next instalment in the Pro Evolution Soccer series will be using the new Fluidity engine. No prizes for guessing what inspired the name!

Creative Producer Kei Masuda described what some of the new features were in a Konami Pre-E3 video this morning. Originally based on the Fox Engine, the team spent a few years developing a new one specifically for PES 2014. Aside from the graphical fidelity, there are six elements to the new engine: TrueBall Tech, M.A.S.S. (Motion Animation Stability System), PES ID, Team Play, Heart and The Core.

TrueBall will give players greater freedom over the ball’s control, whether on ground or in the air. They’ve also implemented barycentre physics, allowing users to control the barycentre (simply put, the centre mass) of both the player and the ball separately. Combined, these make for a “more instinctive style of play.”

M.A.S.S. deals with body contact physics, while Heart refers to the new team morale and player motivation levels. The latter comes into effect in either Home or Away fields, directly affecting the player’s abilities for a more dynamic experience.

More features will be announced in the near future, but until then you can watch the PES 2014 presentation on YouTube.

Ade thinks there's nothing quite like a good game and a snug headcrab. He grew up with HIDEO KOJIMA's Metal Gear Solid, lives for RPGs, and is waiting for light guns to make their comeback.
Previous post Kiefer Sutherland Will Be Snake’s Voice Actor in Metal Gear Solid V
Next post Castlevania: Lords of Shadow 2 Scheduled For Winter