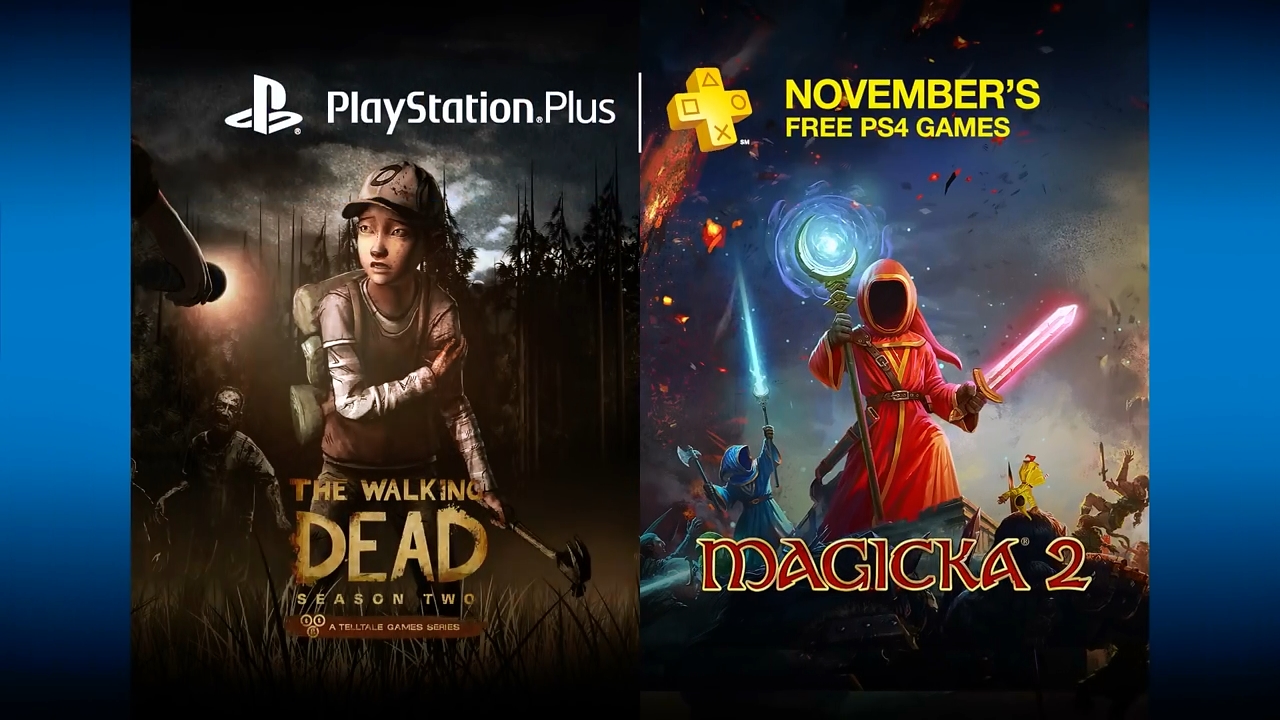 Update:
The Asia region is getting a different lineup for November, which you can take a look at on the PlayStation Store. We’re still getting Dragon Fin Soup so look forward to the new Action-RPG!

Original:
Sony Computer Entertainment have announced their November lineup for the PlayStation Plus program. The games on offer mostly lean towards story and even includes a title making its debut.

The Walking Dead: Season 2 by Telltale Games follows up on the success of Season 1 with another five episodes, this time shifting attention to young survivor Clementine. While it’s possible to jump into the story from here, I’d argue that doing so would actually be a disservice to yourself; S1 grants a reason to care for Clementine, is a better experience overall, and can export the choices you’ve made into S2.

Magicka 2 does have a story but, honestly, its main appeal lies in wielding elemental magic and “accidentally” blowing up friends,yourself included.  Released in May 2015 it improves upon the Magicka formula in a number of ways, such as the ability to cast while walking as well as quickcast slots for newcomers. The developers have also committed to post-launch support, pushing out an update that addressed some major complaints from fans.

Dragon Fin Soup is an interesting addition. This crowdfunded action-RPG is making its actual debut on 3 November and has found its way onto PlayStation Plus as a means to get noticed – it actually costs US$17.99. Check out the launch trailer below to get an idea of what gameplay looks like.

Mass Effect 2 should be famous by now but on the off-chance that someone out there has access to it for the first time – play it. BioWare’s third-person RPG is set in a gripping sci-fi universe that has no shortage of colorful characters, with a wonderful soundtrack complementing the action-heavy gunplay. Mass Effect 2 is a tight, linear experience and, despite some faults, shouldn’t be missed.

Beyond Good and Evil was released all the way back in 2003, the same year as the excellent Prince of Persia: The Sands of Time. Despite being a commercial flop (mostly due to Prince receiving all of Ubisoft’s marketing attention) the action-adventure game endured history by receiving numerous awards. It also happens to be directed by Michel Ancel, who is now working on the open-world shaman romp, WiLD.

Invizimals is a creature collecting game featuring augmented reality. It’s actually what Pokémon GO is attempting to do now, except Invizimals released five years ago on the PlayStation Portable. There are over one hundred animals to collect, each aligned with one of the six different elements. The game was successful enough to spawn four sequels, and an animated series even made its way onto Netflix earlier this year.

Ade thinks there's nothing quite like a good game and a snug headcrab. He grew up with HIDEO KOJIMA's Metal Gear Solid, lives for RPGs, and is waiting for light guns to make their comeback.
Previous post Deepen friendships with Nintendo's mobile game
Next post Review: Need for Speed (PS4)