November’s Games with Gold, Xbox One gets backward compatibility 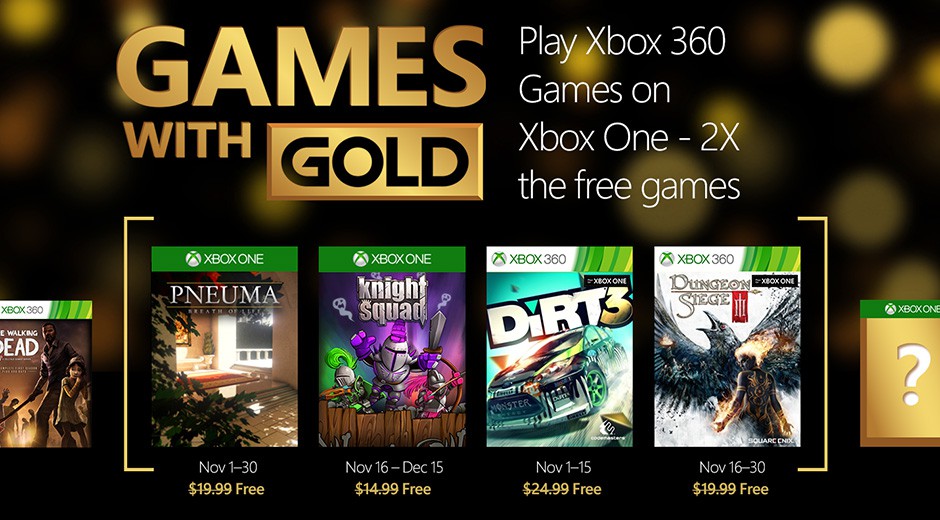 The Xbox One is getting a big update come 12 November. In addition to a revamped user interface and new Store layout is the much touted backward compatibility with Xbox 360 titles. In other words, you’ll be getting double the value with Games with Gold!

The backward compatibility update will work for both digital and disc-based games, and keeps their accompanying suite of items: saves, add-ons, achievements, and Gamerscore. This also opens up the possibility of playing multiplayer games with friends that are on Xbox 360.

Pneuma: Breath of Life by Deco Digital is a first-person puzzle adventure along the veins of Myst and The Talos Principle. Expect a gorgeous but lonely environment accompanied by a minimalist soundtrack. Some gameplay footage here.

Knight Squad by Chainawesome Games is an eight-player party game inspired by the likes of Bomberman. Rather than setting up complex traps, in here your medieval knights get an array of weapons and abilities to smite your friends with. Gameplay footage here.

Dirt 3 by Codemasters should need no introductions. The racing game forces rally cars onto the dirt be it rain, snow, or shine, with night races to put things in a new perspective. There’s also a Gymkhana mode – if you have no idea what that is then check out Ken Block’s demonstration. Here’s the regular gameplay footage.

Dungeon Siege III by Obsidian Entertainment is, unfortunately, the weakest link in the action-rpg series. It’s still a decent game however, and if you’ve never played the earlier titles before then you’re in an even better position. There are no officially hosted videos so hit up YouTube to see it in action.

Ade thinks there's nothing quite like a good game and a snug headcrab. He grew up with HIDEO KOJIMA's Metal Gear Solid, lives for RPGs, and is waiting for light guns to make their comeback.
Previous post A look at Special Force 2, the new FPS in town
Next post Be a part of Gearbox Software’s Battleborn technical test