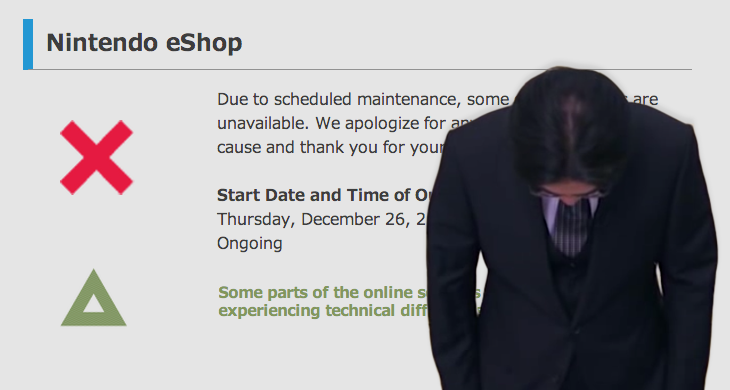 Don’t bother setting up your shiny new Wii U console just yet. Nintendo says the Nintendo Network is having trouble keeping up with the high holiday traffic.

Well, someone was the popular one on Christmas Day. High traffic is overloading the Nintendo Network servers, which deals with everything from the Nintendo eShop to Wii U and Nintendo 3DS account activity. This means that folks will have trouble setting up Nintendo Network IDs for their consoles until it is resolved.

Hi, everyone. We're aware that some of you are encountering issues with eShop and creating NNIDs. Our team is working hard to resolve them…

The Nintendo Network ID, launched earlier this month, is Nintendo’s move to allow its users to no longer have their downloadable content tethered to a single device, and will be associated with an email address instead, similar to accounts on the PlayStation Network and Xbox LIVE.

Due to high Nintendo Network traffic, we are postponing the launch of Pokémon Bank and Poké Transporter. Details here http://t.co/u9vNVpYzmr

The company has taken down Pokémon Bank and the Poké Transporter software from the Nintendo eShop in Japan and the US to soothe the strain. Both software was due to launch on December 27th in the North American region, and has already started running in Japan.

The rash of server issues has not just affected Nintendo’s own. The PlayStation Network and digital distribution store Steam were both having problems over the holidays.

Previous post Valve Sets The Zombies Loose, Makes Left 4 Dead 2 Free For A Day
Next post Wargaming’s Santa Has a Bonus Code for You