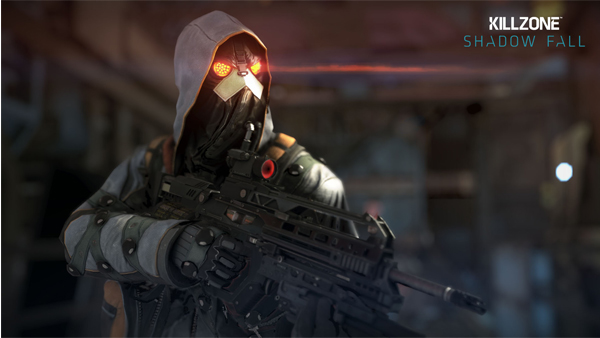 We saw our first glance of The Black Hand in the announce trailer six months ago. With their slim silhouettes and cloaking technology, one would easily think of these as assassins for the Helghan Empire. That description comes pretty close, it seems – these aren’t your typical Helghast soldiers.

In the first instalment of what’s called a “Guerrilla Dossier”, the developers reveal that The Black Hand are a splinter faction of radicals and zealots who wish to force a new war with the Vektans, mostly out of vengeance for the events transpired in Killzone 3. War isn’t on the table for the New Helghan government since it’ll just result in mutually assured destruction, but that’s not stopping The Black Hand from their terrorism.

Most of their recruits come from the Helghan military, operating from the slums of New Helghan. Thus they’re equipped with makeshift weapons and specialize in sabotage. Just how they’ve obtained their infiltration gear is a big question; we’re guessing these come from like-minded Helghans with high official ranks or some similar plot twist. Whatever the case, The Black Hand are just one out of many threats that players have to deal with.

Killzone: Shadow Fall releases together with the PlayStation 4 (November for US and Europe) and will be a Sony exclusive.

I also can’t help noticing how The Black Hand’s face mask looks like an angry, stylised version of Jake the Dog.

Ade thinks there's nothing quite like a good game and a snug headcrab. He grew up with HIDEO KOJIMA's Metal Gear Solid, lives for RPGs, and is waiting for light guns to make their comeback.
Previous post Garena Wants To Send You to the Manchester Derby For Free
Next post Sony Plans to Break into Virtual Reality with PlayStation 4