Legends of Callasia now on Kickstarter with multiplayer demo 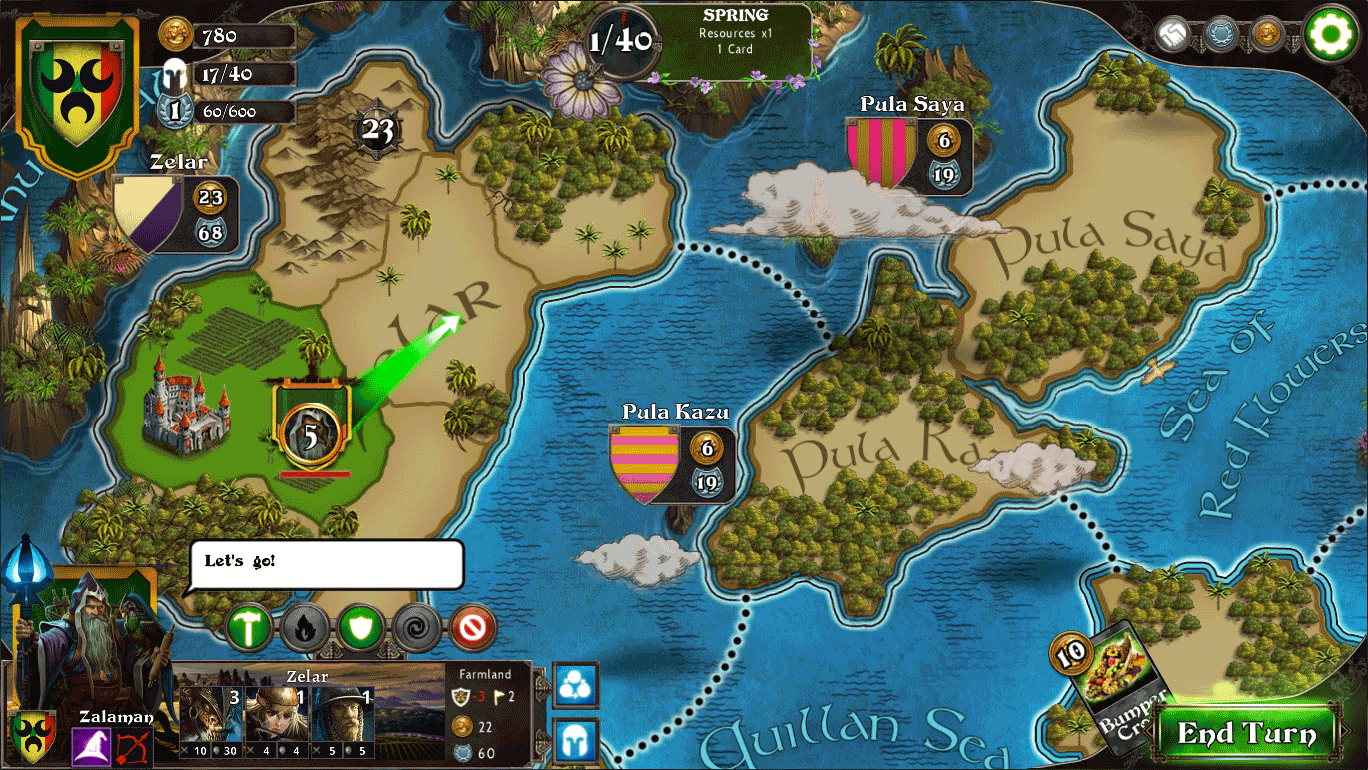 Boomzap Entertainment have returned to Kickstarter for Legends of Callasia, a world conquest strategy game featuring both board and card game elements, playable on desktop and tablet computers.

Legends of Callasia sets out to scratch that strategy itch without demanding an entire evening or more. Boomzap cites games such as Civilization and Crusader Kings for their large scales, while also naming Risk and FTL for their short playtimes and simple controls.

Naturally, gameplay depth would be a concern for most, particularly those coming from PC. To tackle this Callasia utilizes a turn-based combat system that resolves actions simultaneously.  This eliminates the slow turnaround of hot-seat swapping, making encounters faster and slightly less predictable.

Outside of combat, players can expect to build up their empire and its armies utilizing a range of heroes, troop types, and city improvements. And the whole card element is taken a step further with Bonus Cards, meant to offer crucial assists that can turn the tide of favor.

Boomzap Entertainment may sound familiar, as the Singapore-based independent developer has been around since 2005. They primarily create casual games for publishers such as Big Fish Games but do have a number of self-published works under their belt.

As a studio they’ve gained recognition for rapid prototyping and for having all its Southeast Asian staff working remotely. Their games have also won its fair share of awards, including a nomination for Best Made in Singapore Game in The Straits Times Digital Life Awards 2014.

Boomzap says a successful campaign means they’ll get to build a full single-player campaign, prepare a solid Android version on release, and put the game through much more testing and balancing with help from the Kickstarter community. Funds will also be used in art, sound, music, and marketing departments, all of which are just as essential.

In fact, the game was previously called Legends of Fire and Steel when it first appeared on Kickstarter. In the old FAQ the studio explains that they didn’t go with a publisher because there are “very few publishers willing to invest in a mid-range, niche strategy title.”

This time they’ve returned with a working multiplayer beta, available for PC and iPad, which can be downloaded via the Kickstarter page. The developers will usually be online at 9AM, 1PM, and 5PM SGT.

An early release copy of Legends of Callasia can be secured for S$15, whereas increasing the pledge to S$25 nets a second copy for a friend. Check out the campaign page for the full list of tiers and rewards.

The game will ultimately be a premium release, with no in-game ads or any pay-to-win aspects.

Legends of Callasia stands to score on a relatively untapped middle ground in the strategy gaming sphere, provided things are done right. While PC gamers may see this as another potential option in the genre – one that has seen some strong new IPs lately – those on tablets have every reason to get excited for a new innovative offering.

Legends of Callasia is in development for Windows, Mac, iPad, and Android tablets, set to release in early 2016. A Greenlight campaign is also underway, so help out by voting and sharing if you like what you see.

Ade thinks there's nothing quite like a good game and a snug headcrab. He grew up with HIDEO KOJIMA's Metal Gear Solid, lives for RPGs, and is waiting for light guns to make their comeback.
Previous post System Shock 3 officially announced, may feature VR
Next post Unravel arrives on PCs and consoles on Feb 9