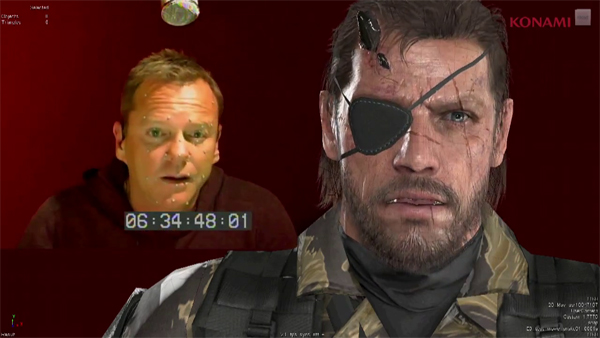 Get ready for the Jack Bauer jokes, because actor Kiefer Sutherland has been confirmed to be Snake’s voice actor for Metal Gear Solid V: The Phantom Pain.

At the Konami Pre-E3 show earlier this morning, director Hideo Kojima explained that the next Metal Gear instalment would have heavier themes such as race and revenge. “As a result, I wanted Snake to have a more subdued performance, expressed through subtle facial animations and tone of voice rather than his words,” began Kojima.

He goes on to say that MGS 5 takes place in 1984, putting Snake at the age of 49. Therefore, the team needed someone in their late 40s to take on the leading role. At the MGS 25th Anniversary Party, Kojima turned to a friend for advice – film producer Avi Arad.

“Whenever I think of Snake, I think of a certain voice delivery,” said Arad. “And Kiefer has this fantastic, rich voice that maintains a level of mystery to it.”

The actor admits that he isn’t a gamer although he is aware of the Metal Gear legacy and success. “It’s an honour to be able to play this character,” Sutherland said. He then proceeds to gush over the advances in video game technology, which really is impressive considering the Fox Engine’s push towards photorealism.

Kojima feels that Sutherland’s a perfect fit in terms of age and performance. The question now is, where does this place series stalwart David Hayter, the man who’s been the voice of Snake since 1998? Will he be making a cameo or voicing a different character? Maybe we’ll find out more on the E3 show floor.

I wonder if the events in MGS 5 occur over twenty-four hours.

Ade thinks there's nothing quite like a good game and a snug headcrab. He grew up with HIDEO KOJIMA's Metal Gear Solid, lives for RPGs, and is waiting for light guns to make their comeback.
Previous post Worlds In A Weekend: Civ V Goes Cheap, Free-to-Play This Weekend On Steam
Next post PES 2014 – The True Essence of Football