It’s Adventure Time: Explore the Dungeon Because I DON’T KNOW! 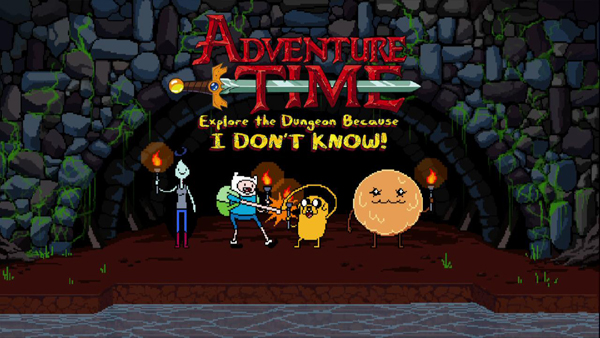 Enamoured fans have been faithfully watching for months, but it’s time to actually join in on the fun once again. Adventure Time: Explore the Dungeon Because I DON’T KNOW! is now ready for multiple platforms and the best part is, you can play with your buddies too! Get those fist bumps ready.

Based on Cartoon Network’s Emmy Award-nominated show, this action adventure game sports an all new storyline penned by series creator Pendleton Ward. Unlike what the title implies, there actually is a reason for our heroes to descend into the mysterious depths: it involves Princess Bubblebum and saving the Candy Kingdom. What else? And so your party sets forth to peel back the mysteries surrounding the Secret Royal Dungeon, a massive labyrinth crawling with baddies and adventure.

Explore the Dungeon supports up to four players, with “multiple fan-favorite characters” available. There’ll be different special abilities and skills at your disposal, with a selection of upgrades to make your character stronger.

It seems to play like a typical twin-stick shooter, only with a universe we already love. The game’s developed by WayForward, who have been doing a great job with licensed projects lately. Furthermore, this makes it their second Adventure Time game too, so you know they have a good grasp on things.

Adventure Time: Explore the Dungeon Because I DON’T KNOW! is out now for the Nintendo 3DS, Wii U, PlayStation 3, Xbox 360 and Windows PC. I call dibs on the Earl of Lemongrab if he’s playable.

Ade thinks there's nothing quite like a good game and a snug headcrab. He grew up with HIDEO KOJIMA's Metal Gear Solid, lives for RPGs, and is waiting for light guns to make their comeback.
Previous post Goodbye Deponia Now Available on Steam
Next post It’s A Huge Seal, Get Your Wallets!