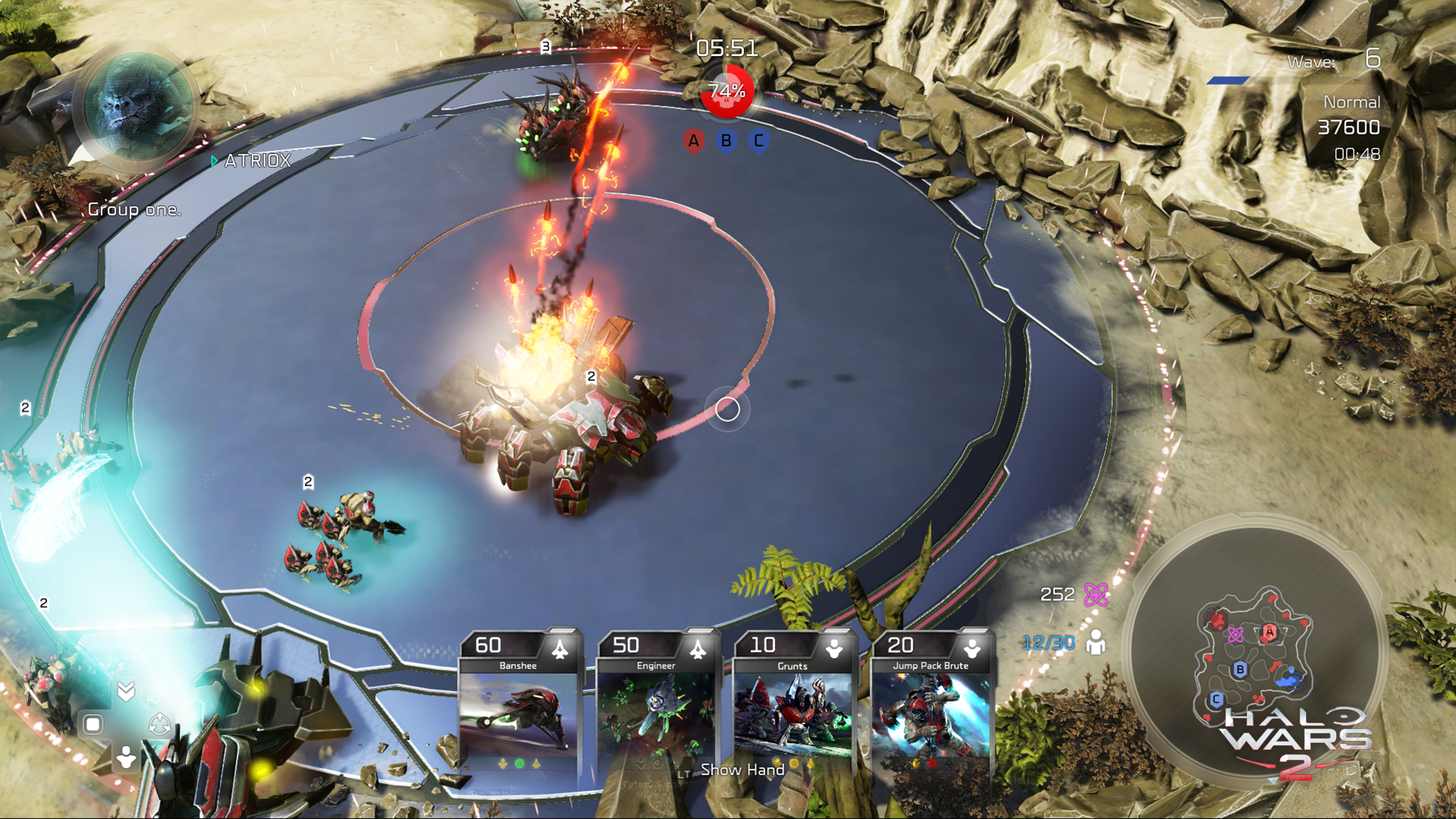 Uttering the term “console RTS” typically gets me a cynical response, one about the folly of commanding an army with a controller. Yet here I was, on my Xbox One, loading up another session of the Halo Wars 2 Blitz open beta. It has a learning curve, certainly, though it’s no different from trying a new strategy title or picking up a new genre – push past those early stumbles and mistakes and, soon enough, everything clicks into place.

Halo Wars 2 is getting a simultaneous PC launch, which means a keyboard and mouse isn’t out of the question. It is hands-down better in terms of speed and precision, although it isn’t perfect – the key bindings, user interface, and unit management stand to benefit from further revision. The RTS and MOBA camps have had years of refinement this past decade, and in the age of eSports, responsiveness is king.

However, what excites me most about Halo Wars 2 is its console presence. We haven’t had a major console RTS this generation and having one given the AAA treatment, backed with Halo mythology, could sow the seeds for a revival. If mobile gamers can get their real-time fix then why not console players? And while fans get their campaign and regular skirmish modes, I do think that Blitz will be the driving force behind newcomer interest.

Conceptually, Blitz mode isn’t new. The PlayStation 4 has indie title ArmaGallant: Decks of Destiny, which is somewhat similar but didn’t manage to win over my colleague’s affection. On mobile, there is an assortment of MOBA games streamlined to fit the platform better. As for cards, well, they’ve already worked their way into Halo 5. Co-developers 343 Industries and Creative Assembly haven’t explicitly singled out their source of inspiration but, whatever the case, Blitz builds upon systems that already work.

To briefly recap what it is, Blitz mode puts two teams of up to three in a battle for map control. Resource gathering, base building, and unit production have all been replaced by a singular card mechanic that oversees unit spawns and leader powers – think bombing runs and the like. Activating cards requires energy, which can be boosted via pick-ups around the map, and consumed cards are replaced by another from the player’s deck. Teams that capture any of the three contested zones earn points, where the first to 200 wins.

Cutting away RTS’ usual trappings lets players focus on strategy and teamwork. The condensed map stresses unit positioning, offering just enough space to coordinate forces while ensuring the action lies seconds away. All of it works in concert to deliver speed – games average ten minutes or less – which in turn promotes experimentation. I’m far less inclined to try something new and risky if failure means being locked in a 30-minute (or more) losing spiral.

The first hands-on session with Halo Wars 2’s Blitz was dominated by controller struggles. I understood the map, the objectives, and knew what to do, but I wound up spending lots of time selecting and reselecting units, ensuring that my commands went through, or simply stopping to check what button I needed to press. It was humbling.

Part of the issue was with the way the game handles queued actions, which ties back into the whole responsiveness bit I mentioned earlier. Most of it, however, was coming to grips with what seemed to be non-intuitive controls – half the time I had my select and move buttons mixed up. I walked away from that first session having enjoyed what Blitz offered, but worried about how it’ll handle on the Xbox One.

The open beta dispelled my concerns; it really was a matter of familiarity and Halo Wars veterans should have no problems getting back into the swing of things. In fact, Blitz is the ideal stepping stone to online multiplayer. There aren’t that many units to control, there isn’t any confusion over card activation, and camera movement can be sped up by holding down the left shoulder button. The directional pad hides some useful functionality as well, such as setting a rally point, groups, or cycling through selections.

Granted, those teething pains are going to be a huge frustration for some people. The hope is that by the time players complete the campaign, they’ll be well-versed in the basics and ready to tackle others online.

Once controls were out of the way I wanted to see how Blitz held up over multiple sessions. The fact that we only had one map, Proving Grounds, meant players quickly found a common strategy, at which point it became a matter of using the right units and leader powers at the right time.

In Blitz, teamwork is best handled by complementary armies. That could be cheap, fast, and vulnerable units from one player while the other goes with expensive, slow, and hardy picks. It could also mean a union of land and air units, or sticking with dedicated player roles, such as one person focusing on energy pick-ups and harassment.

That’s clearly the ideal situation. Most games will typically be played solo with online strangers which, thankfully, is not a recipe for disaster. Stronger players can “carry” their weaker teammates either through voice-chat or by directing them via pings on the map. Dead units refund a portion of their energy cost back to the owner too, so comebacks are always on the horizon.

If the matchmaker did its job right then the opposing team shouldn’t be able to twist the match into a one-sided slaughter. That’s not always the case, though; I’ve seen it happen, thrice, from both sides of the equation and those situations are new fun. Good thing the matches resolve quickly.

Having said that, most strategizing is spent in the deck-building menu, weaving the very thread of one’s Blitz career. Each player has 12-card decks with a hand of four. Cards simply continue duplicating from that pool of 12 so it isn’t possible to run out. The only in-game fatigue that exists is on the battlefield, when units are deployed outside of their home base, the penalties being reduced health and strength –an intriguing trade-off for what is essentially instant tactical insertions.

Decks revolve around a leader, who determines which powers and special units are available. Some of these units come with the ability to cloak, detect, inspire nearby troops, and more – they come in both passive and active flavors. Finding the right balance in terms of card cost, deck composition, and team synergy will be an ongoing endeavor as new cards unlock and new meta emerge.

While I’m happy with the deck-building process and the tools to do so, it’s annoying not being able to see the exact statistics of each card. Inspecting lets us see the level, rarity, unique ability and leader restrictions yet nothing about a unit’s exact hit points or attack power – all we know is that they increase whenever a card levels up by obtaining a duplicate copy. A skeptical view would be that this is to hide the fact that players who open more packs – either through gameplay or the store – inevitably receive stronger cards. Of course, it’s all up to individual ability in the end, as evidenced in other games by players who buy their way into veteran content, only to fail miserably.

Realistically, this is the draw of collectible card games, except the cards are used in a much different context. The trick is to ensure that basic cards remain viable for newcomers (tough given the duplicate bonus), both a week and months after launch.

343 Industries and Creative Assembly are going to have to tread carefully with their future DLC if they wish to keep things fair for players.

Cards aside, Blitz mode needs more content. The lack of map variety is going to hurt Blitz mode in the long run – unless players find themselves invested in their decks and the weekly challenges, there simply isn’t enough to engage the player who may want to hop in from time to time. It’s a tall order but, if Hearthstone: Heroes of Warcraft taught me anything, it’s that deck-building towards new and specific challenges (in this case, terrain) is a great way of bringing back interest.

At least the full skirmish modes are always an option.

Can an RTS come to consoles? Definitely, provided it was designed for it in the first place. Halo Wars 2’s campaign will serve as an introduction to both the mechanics and lore but it’ll be Blitz mode that determines whether new players venture into the faster and ruthless online multiplayer. It offers a balance between time and depth to showcase what real-time strategy can offer, for it is fundamentally no different than skirmish mode when it comes to managing battles.

There’s plenty of bug fixing to be done from now until launch (I’d consider unit pathing to be their top priority). Until then, I’ll be counting down the days to February 21.

Halo Wars 2 will be available for both Windows 10 PCs and Xbox One under the Xbox Play Anywhere program.

Ade thinks there's nothing quite like a good game and a snug headcrab. He grew up with HIDEO KOJIMA's Metal Gear Solid, lives for RPGs, and is waiting for light guns to make their comeback.
Previous post Review: Embracing the dreamy fall through Gravity Rush 2
Next post Final Fantasy DLC, cup noodles, and other anniversary announcements