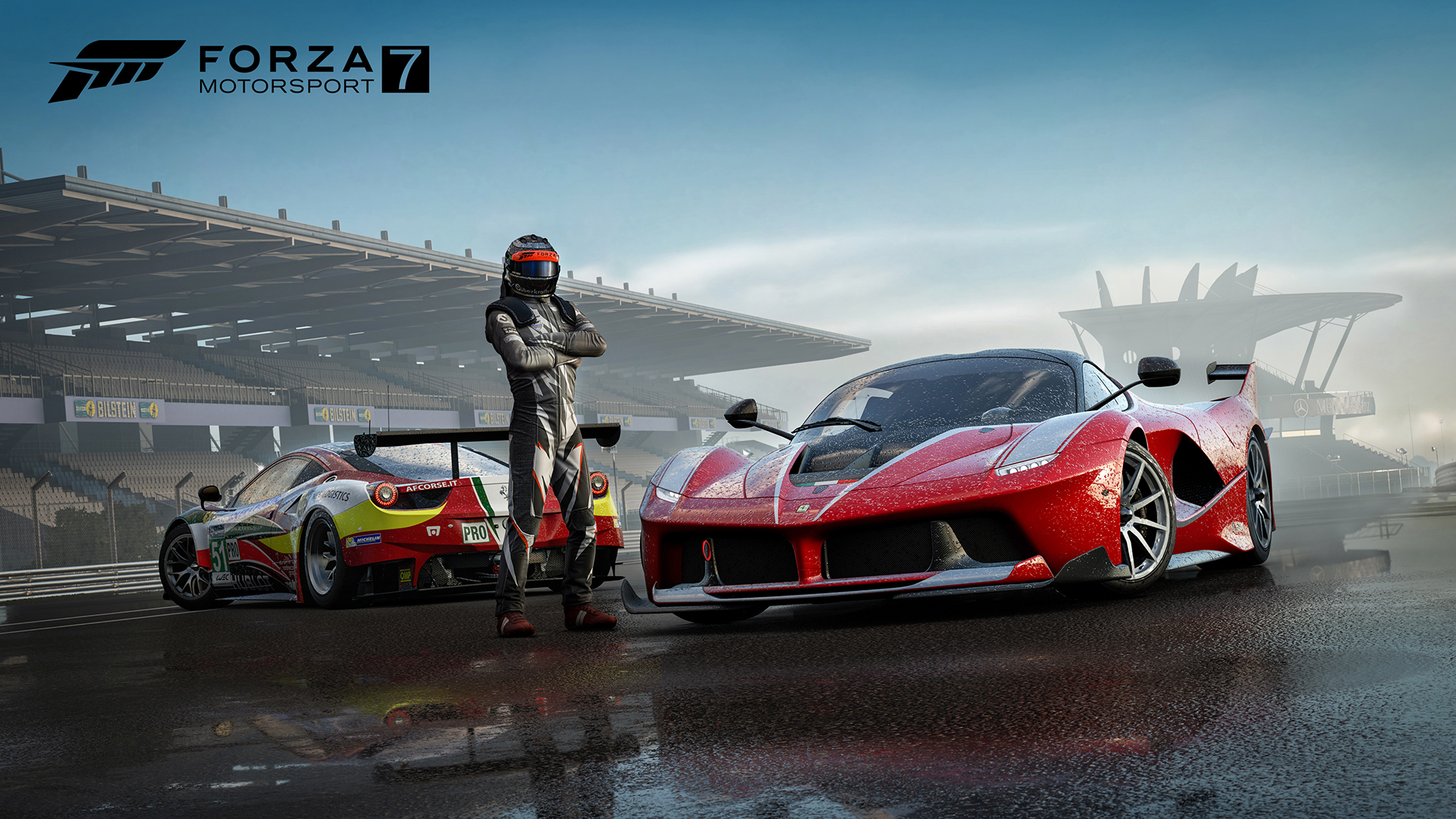 There’s plenty riding on Turn 10 Studios’ Forza Motorsport 7, one of the few key titles highlighted for the Xbox One X’s fragmented launch slate. While the racing game drops a month earlier than the new console, on 3 October 2017, it was designed specifically to take advantage of the One X’s beefier hardware, singing the now-magical phrase “60 frames per second at 4K resolution.” Yet the game must be more than just a prettier sequel, not purely for creative aspirations but to also signify the tenth installment in the franchise – that’s a milestone all of its own.

We recently got some hands-on time with the game, using a build that Microsoft representatives said were pretty much close to final. It was essentially the first twenty minutes, purely single-player and all on console. While the short session barely covered the myriad features I spotted, it at least succeeded in making me want more.

Seeing a game in-person for the first time is always special, since what’s shown on-screen is finally free of video compression. Forza is a good-looking series but this feels like a proper generational leap for the Xbox One faction. The start is heavily narrated, setting up the driver-focused campaign and telling of past racing legends, yet my attention was busy elsewhere. For one, the clear sky looked amazing, which sounds ridiculous since dramatic weather gets fawned over the most. Even so, my awe was cut-short as the scene transitioned, forcing me to instead admire the cars and its drivers.

The creased leather, the polished metal, these textures were coming across high up on the realism scale. I was slightly worried: one janky animation is all it would take for this picturesque scene to crumble.  Of course, that moment never really came, and before I knew it I was tucked in the driver’s seat and asked to go.

If you’ve been dismissing Forza Motorsport 7 out of fear that it’s an overly complex simulator, well, don’t. A few of the arcade-racing types present at the event, myself included, had a blast with it despite our initial misgivings. There’s a line to follow for the most efficient corners, prompts for when to brake, and if all else fails the rewind feature is always an option.

This accessibility doesn’t come at much expense to enthusiasts, as there is layer upon layer of settings customization available, giving you the freedom to fine-tune car handling and overall gameplay — not to as deep an extent as, say, Project Cars 2, but enough for newcomers to grow into. I’m told it supports a long list of steering wheel peripherals used by fans, so that’s another option should the game spark a desire to take digital racing further.

The great thing about Forza Motorsport 7’s opening moments is that it’s basically a well-executed play list, cramming as much variety as they can before handing over full control. One race featured trucks, their massive frames and squealing tires turning corners into a fun, aggressive scramble. Another replaced my delightfully blue skies for stormy grey, pushing the game’s impressive visuals up to eleven. The water droplets sliding across the windshield were no doubt pretty, but what blew me away were the sprays of water trailing the cars, as well as the varying density of the rain. These touches made it feel like we were speeding through the middle of a storm, not just being in one.

Once it was done flaunting, the game gets around to the typical racing career fare: pick a category, buy a car, and hit the tracks to slowly work my way up the ladder. This early on, only a fraction of the 700 plus cars were available, yet thanks to the different race categories it wasn’t lacking in variety. From modern hot hatches to supercars  and historic racers, there was plenty I could hop between at any time.

What I really wanted to see was the touted focus on driver customization. Turn 10 seems to have delivered for the most part, with pages of helmet and racing suit designs to choose from. It didn’t seem like I could go a level deeper to tweak color schemes, visor tints, or decal placement, however, and I suspect that may be due to the multiplayer side of things – it’s hard to say without getting a proper look at it. The cars had access to preset designs too, which seemed like they could be shared and voted on by other players.

To nobody’s surprise, we’re also getting loot chests – completing the triumvirate of major Xbox titles, Halo and Gears of War, to receive the feature. There were several tiers available with what could only be rare loot, consisting of cars and other driver gear. This is an area that needs a little more digging around as well, since there was no indication of what would happen with duplicates or whether the items players wanted were purely subject to chance. Since we were getting cars through the loot system too, were they purely cosmetic in nature? And if not, could competitive games lock them from play?

Twenty minutes is a mere scratch on the surface for most games, and this holds especially true for a content-rich behemoth such as Forza Motorsport 7.  There’s little doubt that Turn 10 have created a pretty sequel, and a very pretty one at that, making a case for both the Xbox One X and a better TV (or taking the PC route). As for whether it’s shaping up to be a worthwhile sequel, that’s a judgement we’ll have to reserve for launch. As a narrative-driven player I certainly enjoyed how they were presenting the campaign, and the amount of options for both vehicles and avatar painted a promising picture. The loot chests may prove irksome but that’s easily overlooked if the launch content feels complete, not a DLC delivery system.

It’ll be an uphill battle come 3 October, and I’m eager to see how far next-generation Forza can go.

The Forza Motorsport 7 demo for Xbox One and Windows 10 PC is out now.

Ade thinks there's nothing quite like a good game and a snug headcrab. He grew up with HIDEO KOJIMA's Metal Gear Solid, lives for RPGs, and is waiting for light guns to make their comeback.
Previous post Sam Says: A Girl in PlayerUnknown’s Battlegrounds
Next post Code-breaking in the Call of Duty: WWII beta