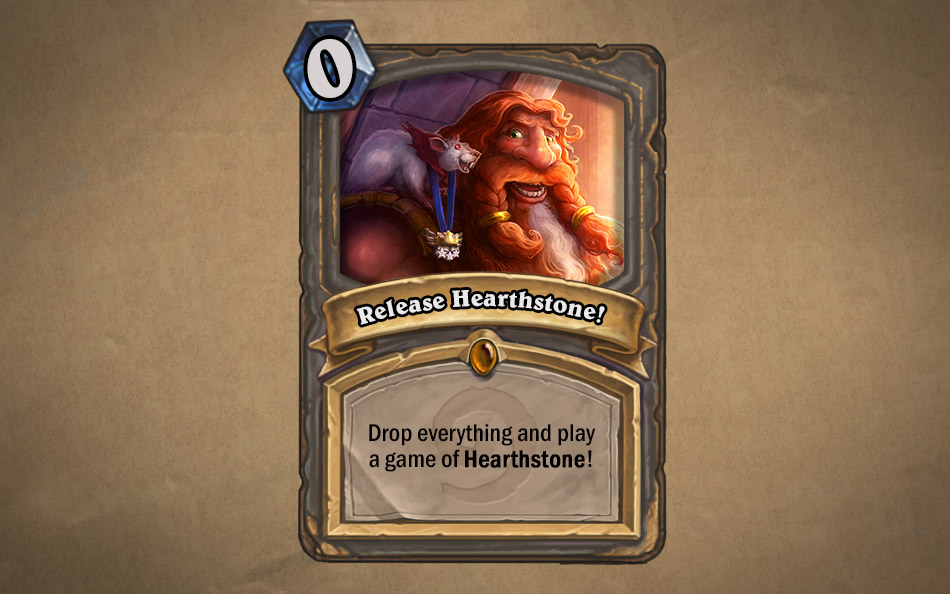 The world has been busy lapping Hearthstone up since it entered open beta, with plenty of hours already sunk into virtual card battles. Blizzard has just announced that the game is finally live in the US (that includes us!), with lengthy patch notes that veterans ought to look at.

Still haven’t board the bandwagon? You can get your free ticket here.

The most important update is that Blizzard claims to have fixed the two card placement bugs that have plagued us since time immemorial. Huzzah! The second thing you should know is that getting disconnected will not automatically result in a loss. Instead, players have sixty seconds to reconnect, which should be greatly appreciated by Legendary-ranked and Arena players.

Nat Pagle and Tinkmaster Overspark have been nerfed after their performance in a recent tournament; secrets now only play on your opponent’s turn; players may begin at a higher rank during a new season depending on their previous rank; and there are loads of visual updates to make the game look prettier than it already is. That includes Golden Heroes which unlock after 500 Ranked wins.

I highly recommend looking through the full patch notes.

No Adventure Mode or iPad support just yet, unfortunately, but this update should be enough to bring lots of curious people back.

By the way, World of Warcraft players get to win the exclusive Hearthsteed mount because why not?

Ade thinks there's nothing quite like a good game and a snug headcrab. He grew up with HIDEO KOJIMA's Metal Gear Solid, lives for RPGs, and is waiting for light guns to make their comeback.
Previous post Flappy Bird Creator to Release New Game This Month
Next post WildStar Launches in June, Pre-Orders Open Soon