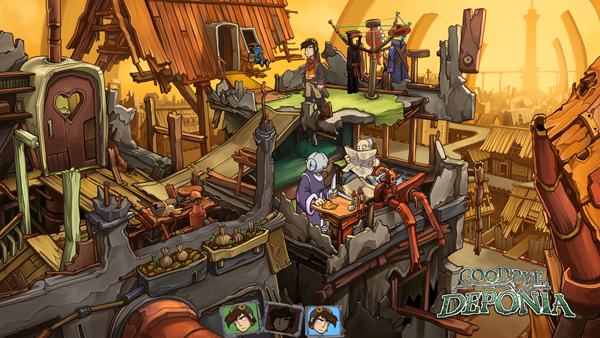 If you’ve been itching for some “traditional” point-and-click games lately, then Daedalic Entertainment’s Deponia trilogy might be right up your alley.

As the title alludes to, Goodbye Deponia is the final instalment for the comedy adventure. Lead character Rufus is still determined to leave the junk-filled planet for Elysium, devising yet another plan for his grand escape. Trouble is, our protagonist has never been all too reliable, causing everything to spiral out of control once again.

You can pick up Goodbye Deponia, developed for Windows and Mac, for US$19.99 (SG$25) or get the Premium for US$24.99 (SG$32) on Steam. The Premium edition comes with digital versions of the soundtrack, concept art, an animation workbook and an “Introduction to the Deponia world” book.

Never heard of it?

The series’ reception has been generally positive. Its brand of slapstick humour seems to be its greatest strength, though you have to bear in mind that this is a German production translated to English, and that it won’t be for everyone. On the bright side, the games look absolutely gorgeous, with colourful environments and hand-drawn backdrops that really gives the junk-world an identity.

It’s best that you try the demo before committing to a purchase. While Goodbye Deponia does have one, it might not mean much without some background knowledge. Download the Deponia demo instead, which is also found on Steam.

Ade thinks there's nothing quite like a good game and a snug headcrab. He grew up with HIDEO KOJIMA's Metal Gear Solid, lives for RPGs, and is waiting for light guns to make their comeback.
Previous post Review – XCOM: Enemy Within (PC)
Next post It’s Adventure Time: Explore the Dungeon Because I DON’T KNOW!