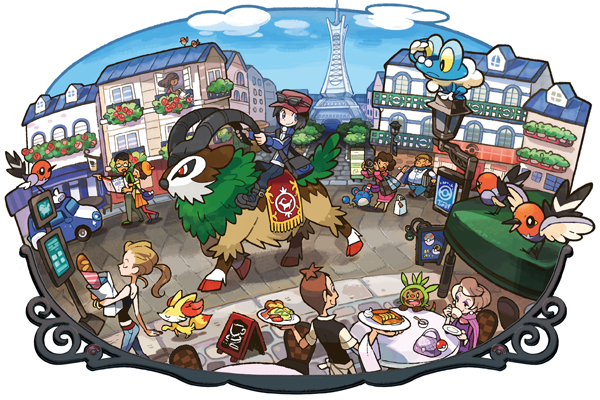 It’ll be safe to say that fans are going to have a harder time waiting for Pokémon X and Pokémon Y once they’re done with this post.

The two games first stirred up excitement in January, when their announcement accompanied pictures of the new starter and Legendary Pokémon. Now we’ve learned that the game will be taking place in the star-shaped region of Kalos, home to Lumiose City. It’s pretty much Paris, complete with a tower “set to become an iconic structure”.

Of course, the first thing that anybody will notice in the video is Gogoat, who seems to be putting our dear old bicycle out of a job. When not giving you a lift around the city, the Grass-type Pokemon can use Horn Leech to recover health in a battle, so it doesn’t sound too shabby. The online community (naturally) expressed their incredulity at being able to sit on benches and turn heads, but it goes to show just how far the game has come along since 1996.

In keeping with the whole metropolis charm, your trainers can get new outfits and accessories too. You begin by choosing either a male or female with one of three skin-tones, unlocking said cosmetics along the way.

As for the Pokémon, three new ones were introduced in this update:  the “cowardly” Helioptile (Normal- and Electric-type) with Parabolic Charge; the friendly Fletching (Normal- and Flying-type) that has Flame Charge; and leaf-chewing Pancham (Fighting-type) that swaps out with a Parting Shot.

These add to the massive list of those you’ve already encountered in the previous games. Helpfully, the new ones you catch will be added to the Pokédex and then categorised into three areas on the region.

Pokémon X and Pokémon Y will debut on the Nintendo 3DS handheld in October this year.

Ade thinks there's nothing quite like a good game and a snug headcrab. He grew up with HIDEO KOJIMA's Metal Gear Solid, lives for RPGs, and is waiting for light guns to make their comeback.
Previous post Review: Star Trek (X360)
Next post Three Cartoon Network Games For Fall 2013