FTL: Advanced Edition Warps to PC and iPad in Early 2014 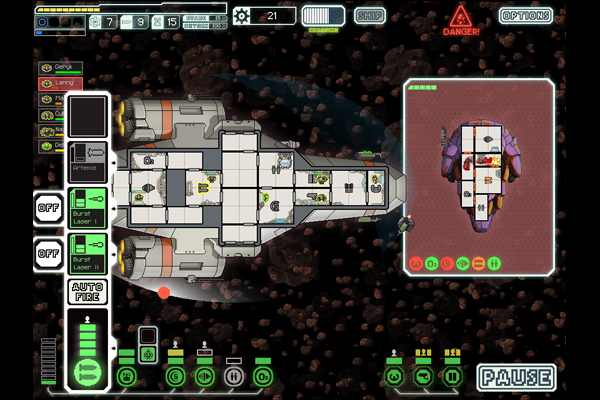 Trust indie developers to remind us that “free expansions” actually do exist. Aside from providing more substantial content than some paid DLCs, Subset Games’ upcoming FTL: Advanced Edition comes with a surprising titbit: work contributed by a certain Chris Avellone.

The expansion includes just about everything you’ve come to expect from spaceship roguelike sensation, FTL: Faster Than Light. That pretty much means “new weapons, drones, augments, systems, enemies, and more.” The announcement provides two examples, namely the Mind Control System and Hacking System. Getting the enemy’s medical bay to hurt rather than heal sounds morbidly exciting, especially if you’re opting to kill the crew without blowing up the ship. As this is a top-down 2D game, you’ll have to imagine how that mess would go about – I’m thinking Surgeon Simulator 2013.

There’ll also be new weapon mechanics at play. Overcharging a weapon to increase volley count or using area effect targeting are very much welcome additions; it looks like these will add even more risky options to a game where dying is pretty much the norm. Nobody said being a rebel was easy.

As for Chris Avellone, the narrative designer for Project Eternity and Wasteland 2 has somehow managed to squeeze in time as a guest writer for FTL: Advanced Edition. Together with Tom Jubert, the writing team has helped to “add a new sector and scatter new events throughout the rest of the game.” We won’t be seeing a space epic come out of this but who knows, we might just run into an interesting set of missions.

The PC expansion will coincide with the game’s debut on iPad in early 2014.

Subset being a two-man studio, they can’t promise that FTL will come to other tablets although they do say expanding support will be their “next highest priority.” Smartphones, on the other hand, just don’t meet the mark when it comes to screen size.

If you already own the game and are now itching to replay it, don’t forget to try the mods.

Ade thinks there's nothing quite like a good game and a snug headcrab. He grew up with HIDEO KOJIMA's Metal Gear Solid, lives for RPGs, and is waiting for light guns to make their comeback.
Previous post PlayStation 4 Ready For HK/SG On December 17
Next post Confirmed: PlayStation 4 Launches on 19 December for SG$639