FIFA 14 Is Out On Mobile Too 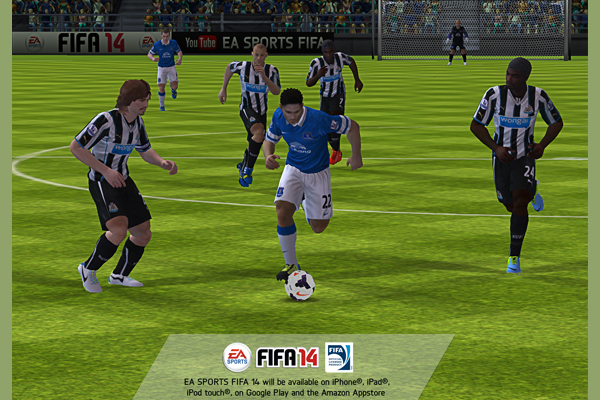 We’re pretty sure that all you soccer fans out there know about FIFA 14’s release on PlayStation 3 and Xbox 360 this week. While you’re all busy getting acquainted with the new control system, did you know that EA Sports also has a mobile version out there? So yes, you can pretty much soak yourself in one of the world’s most popular sport whether you’re home or away. Oh and by the way, the mobile version’s free.

Boasting an all-new Touch Flow Control system, everything you need to do can be done either by tapping or swiping the screen. Need to pass? Just tap on the player. How about scoring one in? Then swipe for victory! The new controls also let you position an entire team rather than the usual one or two, which should allow for a faster and smoother experience.

When it comes to selection, the mobile version doesn’t disappoint either. You get 34 stadiums with over 600 teams, from over 30 leagues in the game. While the game is completely free, you can pay SG$5.98 to unlock three classic modes: Manager, Tournament and Kick-off.

FIFA 14 Ultimate Team
Build your team and pick a style of play. Manage your club and compete to earn coins, which you can then spend on new players and items to improve your team with endless possibilities. Included in Ultimate Team, the Single Player Seasons allows players to progress through a league system by being matched against other teams of a similar level within 10 Divisions.

Games of the Week
Play the next game your team will play in real life and five of the top upcoming real-world clashes in Games of the Week. The recent form of your team and players, as well as injuries and suspensions, are reflected in game.

Penalty Shootout
A mini-game that does what it says. Experience the thrill of 5 vs. 5 penalty kicks to decide the match’s winner.

There’s online multiplayer too although it’s only available for Apple devices. Sorry Android fans, I know how it feels.

FIFA 14 for mobile is out now on the App Store and Google Play. For more information you can on scoot over to the official page.

Ade thinks there's nothing quite like a good game and a snug headcrab. He grew up with HIDEO KOJIMA's Metal Gear Solid, lives for RPGs, and is waiting for light guns to make their comeback.
Previous post South Park: The Stick of Truth Releases This December
Next post Review: Grand Theft Auto V (PS3)