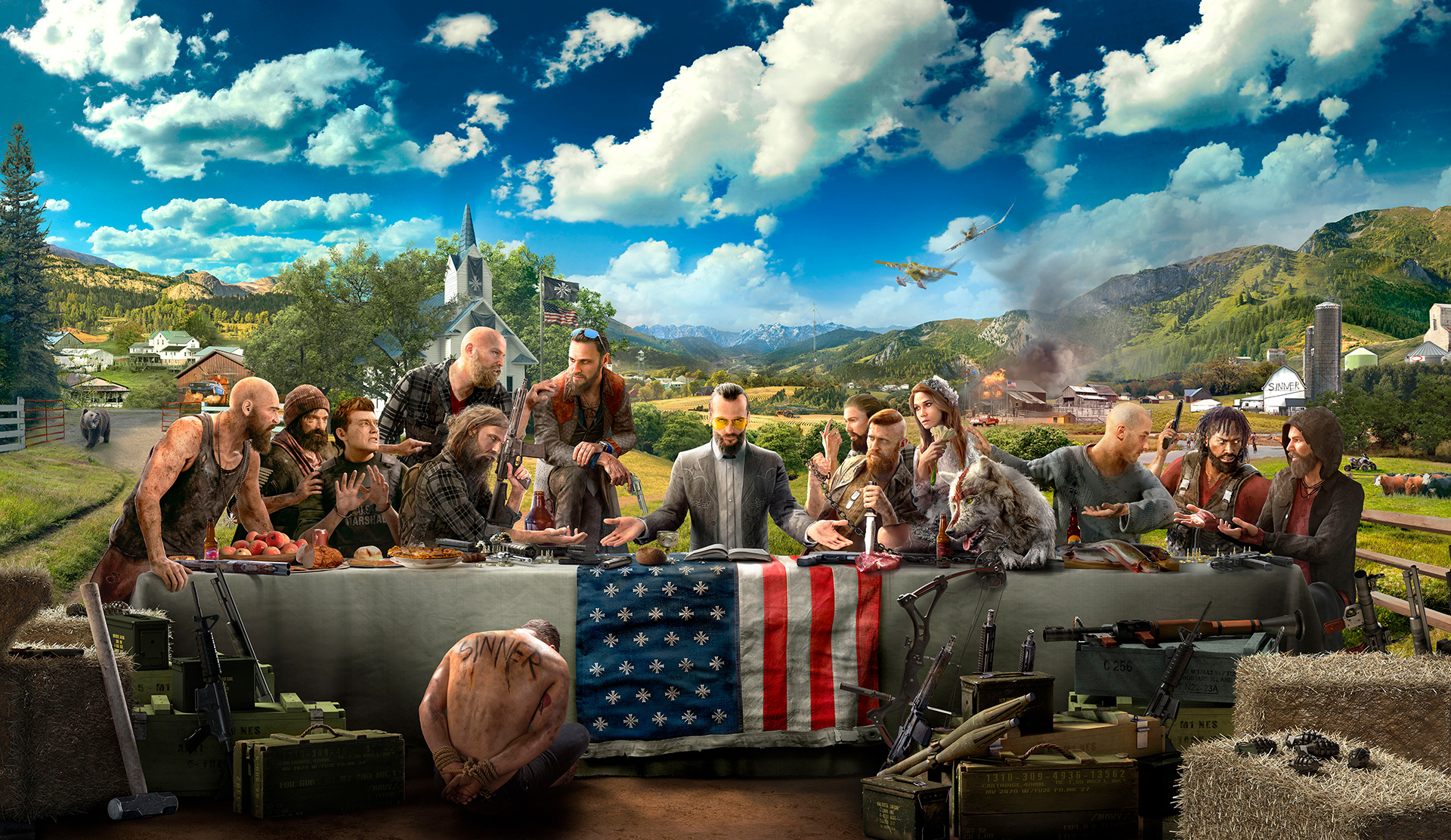 Far Cry 5 will release on 27 Feb. 2018 for PlayStation 4, Xbox One, and PC. Following an earlier art tease inspired by the famous Last Supper, Ubisoft has finally unveiled the first trailer and bits of detail for this latest entry in the open-world franchise.

Development is led by Ubisoft Montreal, with support from the Toronto, Kiev, Shanghai, and Ubisoft Reflections studios.

Players take on the role of a new junior deputy in the fictional Hope County, Montana, the first US-based setting for the series. Our arrival sparks a violent regional takeover by the fanatical doomsday cult, The Project at Eden’s Gate, who’d been silently planning the coup for years. And so it falls to us to lead a resistance and liberate the besieged community.

Trekking across American soil brings some notable gameplay changes to the Far Cry formula. We’ll get to actually fly planes and engage in aerial dogfights against cultists – we’re pretty sure the pitch for that sounded nothing short of amazing. Vehicles will now be a mix of muscle cars, big rigs, ATVs, and boats, while weapons now include video game’s iconic baseball bat.

Interestingly, we’ll get to recruit characters and “specialized animals like bears and cougars” to complement our chosen playstyle, either stealthy or loud. Ubisoft will also include a map editor, updated with new features to be revealed at a later date.

Last but not least we have our villains. The man sitting in the middle of the revised Last Supper is cult leader Joseph Seed and he, together with his devoted siblings, look to bring a fresh new dose of crazy to the series. Ubisoft has already released character vignettes for Mary May, Nick Rye, and Pastor Jerome.

Far Cry 5 will be available in a Standard, Deluxe, and Gold Edition, all of which are now available for pre-order. The PS4 edition comes with a free skin pack at release, which Xbox One and PC users must acquire via Ubisoft Club.

Ade thinks there's nothing quite like a good game and a snug headcrab. He grew up with HIDEO KOJIMA's Metal Gear Solid, lives for RPGs, and is waiting for light guns to make their comeback.
Previous post Here’s what MSI is bringing to Computex 2017
Next post This weekend’s Wargaming League Grand Finals 2017