Experience The Olympic Games With Blackberry 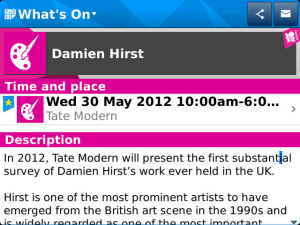 Are you having fun with the Olympics?

For those of you who want to be more involved with all the sporting action, you can try out some free Olympic-themed apps on your Blackberry!

In Wild Olympics Athletics, you play a gazelle in a hurdles event. The event is split into qualifying rounds and finals. Your only goal is to beat the other AI gazelles at their own game. Time it right, tap the screen to jump the hurdle and eventually make it to the finish line. Wild Olympics Cycling sees you as a fox cycling on the track switching lanes to avoid other cyclists. Keep it up and the game will be yours. Finally, Wild Olympics Jump requires you, as a koala, to pole vault, accomplished by tapping when the power gauge is at the right point.

All three games come with a single purpose and objective, and are all extremely simple. Although one wonders why the three games are sold separately, these games in the Wild Olympics series are a great distraction for kids, but unlikely to offer much of a real challenge for even the most casual of gamers. All three titles are free, though, so they are worth the shot.

Another free app Blackberry users might enjoy is the London 2012 Official Join-In App for the Olympics and Paralympics.

A handy pocket guide for the entire Olympics, the Join-In App shows you activities centred around the Olympics, and tells you where you can participate in them. After all, the Olympics aren’t just confined to the track and the field.

Experience road events, find out where spectator spots are, and even access detailed maps of the Olympic Park and over twenty other venues. Live updates, containing news, photos and social commentary from the Games, are also available.

You can also customise your Join-In app with the ‘My Games’ option, which lets you create a personal schedule to help you plan your Olympic and Paralympic experience. While the Join-In app does very little for overseas spectators, it’s a god-send to Blackberry users who are in London for the Games.

For Blackberry users catching up to the Olympics festivities, do check these apps out!