Evolve gets medic with finger gun and respawn beacon 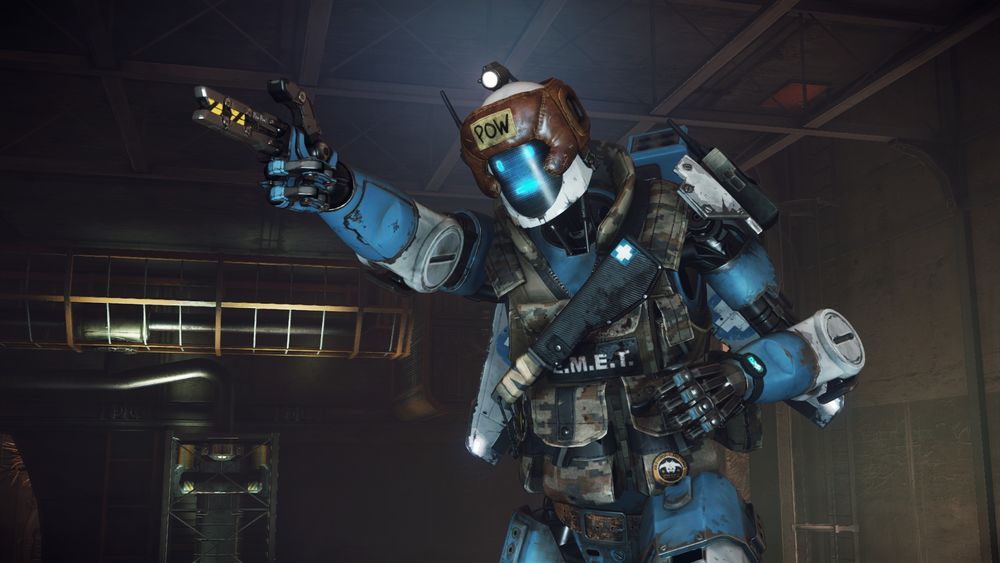 Player numbers may have declined but Turtle Rock Studio’s 4-v-1 shooter, Evolve, is alive and kicking. In fact they’ve just released Emet, a medic-class hunter that can cut respawn timers down to just 30 seconds.

Emet is described as a repurposed medical drone but, really, the recalibration was nothing more than having a “death commando logic core” shoved in. As a side effect it now suffers from a split (and highly psychotic) personality, so expect to hear some interesting lines.

And for those wondering, E.M.E.T. stands for Electronic Medical Evacuation Technician.

Emet utilizes a Replay Cannon for offense. The primary attack fires an explosive tracking dart from the finger gun, while the secondary unleashes a salvo of homing missiles that, according to player estimates, detonate mid-flight after 200 meters.

For recovery Emet can deploy three Healing Buoys that have a 15m radius each. Note that they do not stack, which is to say you won’t get three times the health recovery by standing in range of all three. That said these buoys can be temporarily boosted with the Healing Burst ability.

Then there is the Respawn Beacon, an ability only accessible once a teammate dies. The beacon overrides dropship timers and cuts respawn times down to a mere 30 seconds, essentially making it a critical combat revive. Knowing when and where to place these beacons will be key, as any skilled Monster would be sure to destroy them.

Emet joins assault-class Lennox, trapper-class Jack (he’s the one that “repurposed” Emet), and the monster Gorgon as part of Evolve’s Hunting Season 2. The final addition, a support-class hunter, will be released before March 31 next year.

All this is part of Title Update 7, which includes a balance patch and upcoming hunter adaptations for Maggie and Tech Sergeant Hank. More information, along with patch notes, can be found at the official site.

As of writing Evolve is on sale for an all-time low of S$18.66 (66% off) on Steam. The player population has mostly shrunk to a core of a dedicated players, though they’re mostly based in North America; newcomers in Southeast Asia ought to find a group before diving in.

Ade thinks there's nothing quite like a good game and a snug headcrab. He grew up with HIDEO KOJIMA's Metal Gear Solid, lives for RPGs, and is waiting for light guns to make their comeback.
Previous post Kojima Productions lives on, now working on PS4 exclusive
Next post Review: Game, stream, and record with the ASUS G11CB