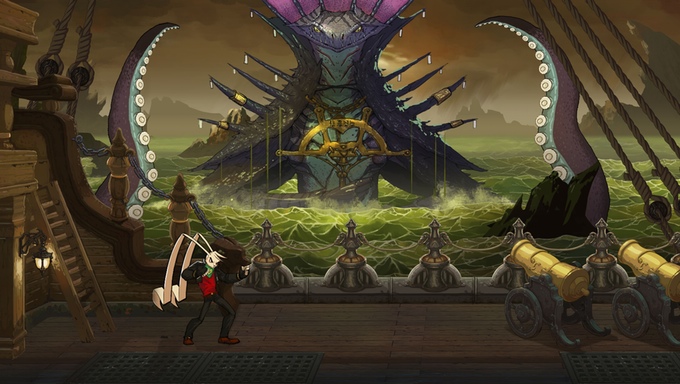 Dusty Raging Fist, prequel to last year’s beat-‘em-up action game Dusty Revenge, has failed to meet its Kickstarter goal of AU$60,000. Despite the massive financial setback, the studio aims to continue working on the game for a 2016 Steam release.

The update following the campaign’s end was brief, with PD Design thanking everyone who backed or provided feedback for their upcoming game.

“While Kickstarter does not seem to be the right funding platform for Dusty Raging Fist, we were thrilled to be able to get the game greenlit for Steam release during the campaign period. Moving forward, we will continue to fund the project through other avenues, as we work towards our Steam release goal in 2016.”

Last month, lead designer KJ told us in a brief interview that juggling between contract jobs and Raging Fist was really disruptive for development, and that they may be forced to remove “some of the least important or most time-consuming features.”

Dusty Revenge released in 2014 to mixed reviews, its great art style and fighting system brought low by a number of technical problems. For Raging Fist they’re addressing those issues by shifting development from Torque 2D to Unity 3D, as well as adding highly requested features such as online co-op.

In fact, anyone curious on how the new engine feels can try out a little fan project the team made in August this year, called Final Fantasy VII: Re-Imagined. Featuring only one level, it sports Guardian Force summoning as well as a Materia system, gameplay elements that are all also coming to Raging Fist.

Dusty Raging Fist is being developed for both Windows and Mac.

Ade thinks there's nothing quite like a good game and a snug headcrab. He grew up with HIDEO KOJIMA's Metal Gear Solid, lives for RPGs, and is waiting for light guns to make their comeback.
Previous post GameStart 2015: Founder’s Base Round-Up
Next post World of Tanks Beta coming to PlayStation 4 this December 4th