The Crew 2 launches on 29 June 2018, collector’s edition for Asia revealed 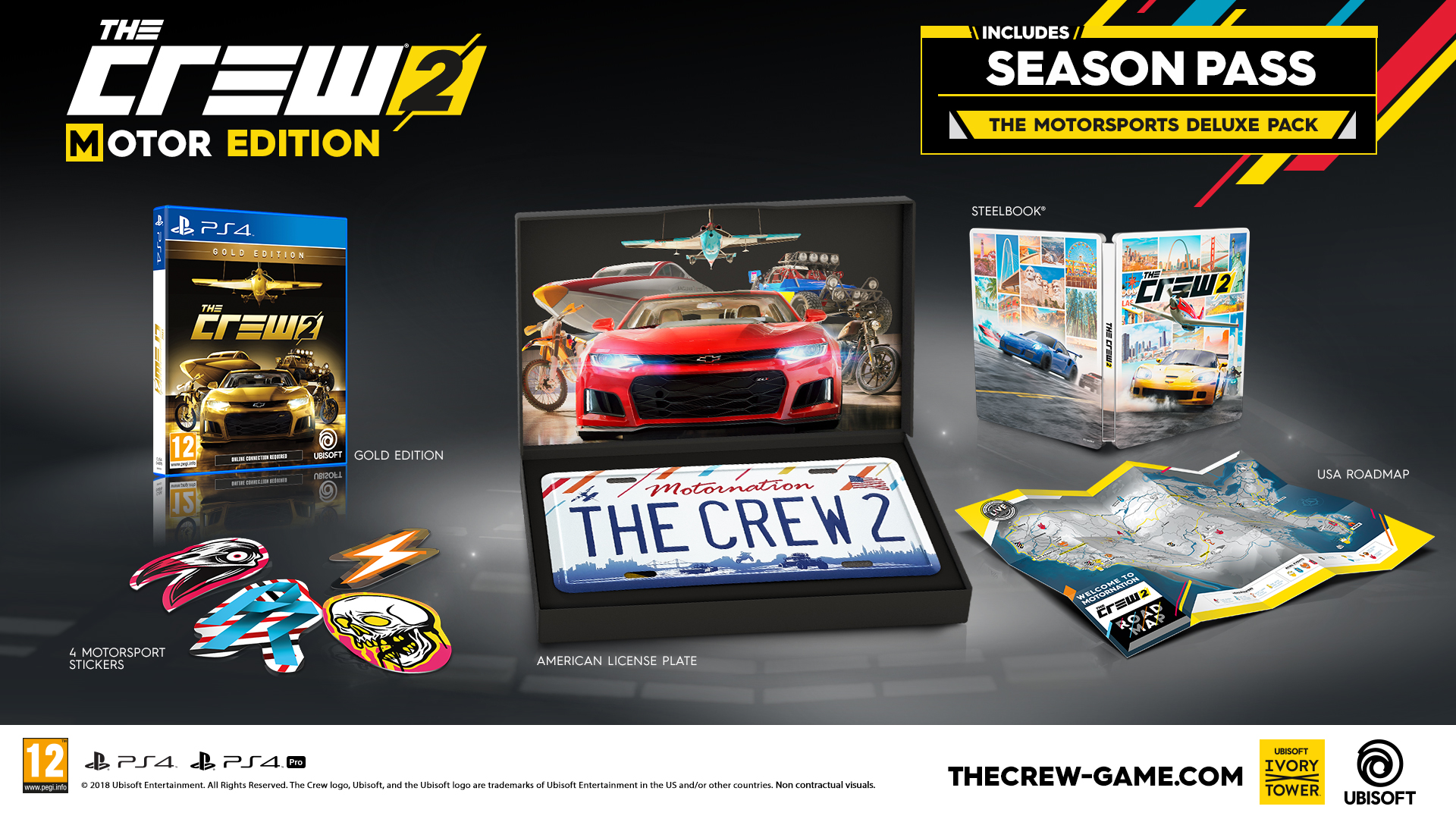 Ubisoft’s The Crew 2 hits the streets on 29 June 2018. The persistent open-world racing game lets players zoom about a scaled-down America in cars, bikes, boats, and planes, all to become the greatest motorsports champion there is. They’ve also announced a physical Motor Edition set for Asia, the pre-order bonuses, and digital rewards for playing the first game.

The Motor Edition set (featured above) comes with a Gold Edition copy of the game, the season pass, the Motorsports Deluxe Pack DLC, and physical goodies in the form of a license plate, roadmap, and a set of four stickers.

As for pre-orders, we’re looking at bonus rides such as the Harley-Davidson Iron 883 2017 and the Mercedes-AMG C 63 Touring Car 2016, both part of the Legendary Motors Pack DLC.

If your eyes haven’t glazed over from the DLC lists, swing on by the official page to register for the beta. It’s not a guaranteed slot but they’ll be holding one for all three platforms.

Beyond that, those who own The Crew may want to hop back in for a pre-release rewards program. You’ll only need the base game to participate, with the rewards being vehicles unlocked for The Crew 2.

While The Crew 2 continues the option of driving from one American coast to the other, developers Ivory Studio have made plenty of tweaks to turn this into a proper sequel. The extra vehicle types is a natural progression from the Wild Run DLC, which added bikes, monster trucks, and more to the original game. To expand on that we now have boats and planes, taking the open-world freedom to a whole new level. Additionally, regions have been reworked into hubs that reflect different motorsport families: off-road, street racing, pro racing, and freestyle.

Responding to past critique, they’re also scaling back on the story, no longer restricting movement to mission completion rate. In fact, the only goal the player has is to become the Motornation champion, and it’s entirely up to them how they want to get there. Ivory Studio tried to cut down on menus and loading screens as much as possible, too, so much so that you can instantly switch vehicles — even from land to air — without losing momentum.

It sounds like they’re doing what Ubisoft Montreal did with Watch Dogs 2: lighten up on the gritty realism and let players have fun. Hopefully Ivory Studio gets everything to feel right and, more importantly, avoid the connection issues that plagued the predecessor’s launch.

The Crew 2 will be out for PC, PlayStation 4, and Xbox One.

Ade thinks there's nothing quite like a good game and a snug headcrab. He grew up with HIDEO KOJIMA's Metal Gear Solid, lives for RPGs, and is waiting for light guns to make their comeback.
Previous post Twitch Prime begins monthly free games program, 5 titles now available
Next post Little Witch Academia: Chamber of Time bursts onto PC and PS4 on 15 May