Creators of Myst and Riven Want to Crowdfund Obduction 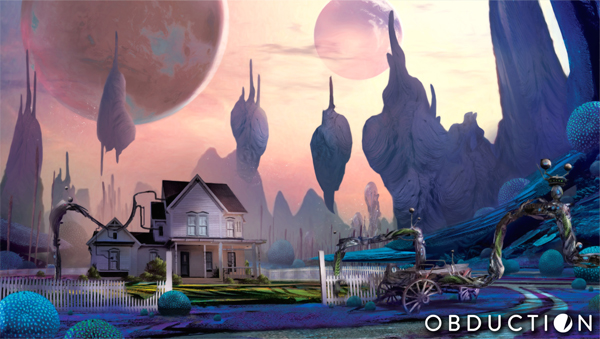 Videogame publishers today wouldn’t normally be enamoured of a pitch for a first-person exploration adventure. That’s understandable given the seemingly niche appeal, but take a look at Myst. Nobody really expected the critical and financial success it enjoyed during much of the ‘90s, spawning remakes and ports for years to come. Thus it’s almost fitting that Cyan should turn to the one medium that’s been helping other developers make a comeback: Kickstarter.

Obduction will be Cyan’s return to form after years of absence, bringing back everything that Myst and Riven were known for: beautiful landscapes, enchanting soundscapes and a story that imparts you with enough curiosity to explore. The biggest difference is that now, they’ve got Unreal Engine 4 – yup, the one that’s being used for next-gen games.

Some of the high-profile members on the team include Cyan co-founder Rand Miller, fantasy and science fiction artist Stephan Martiniere, and veteran developer Eric A. Anderson. They’ve raised over US$200,000 of their US$1.1 million goal so far and promise that the funds go straight into Obduction’s budget, expanding the team where necessary.

There’s little to see at the moment other than concept art, so be warned that this is very much a pledge of faith (as with all crowdfunded projects). However the real worries here are the lack of a detailed budget breakdown, as well as the fact that stretch goals will determine the scope of the project. Knowing that a developer has a specific goal with clear plans moving forward is always reassuring; sadly, Cyan doesn’t adequately address these in their pitch.

Admittedly I’ve grown a little ambivalent over Kickstarter these days, but when there’s nobody else keeping a check on things it pays to be cautious. Ultimately it all falls down to your judgement, so here’s the Kickstarter page.

Minimum pledge for a digital copy of the game is US$25 (SG$30) for Windows and Mac, with an estimated release of mid-to-late October 2015.

Anybody have a story to share about Myst or its predecessors?

Ade thinks there's nothing quite like a good game and a snug headcrab. He grew up with HIDEO KOJIMA's Metal Gear Solid, lives for RPGs, and is waiting for light guns to make their comeback.
Previous post Blizzard All-Stars Is Now ‘Heroes of the Storm’
Next post Studio behind The Bureau: XCOM Declassified and BioShock 2 Struck By Layoffs