Celebrate the PlayStation Plus 6th Anniversary with these deals 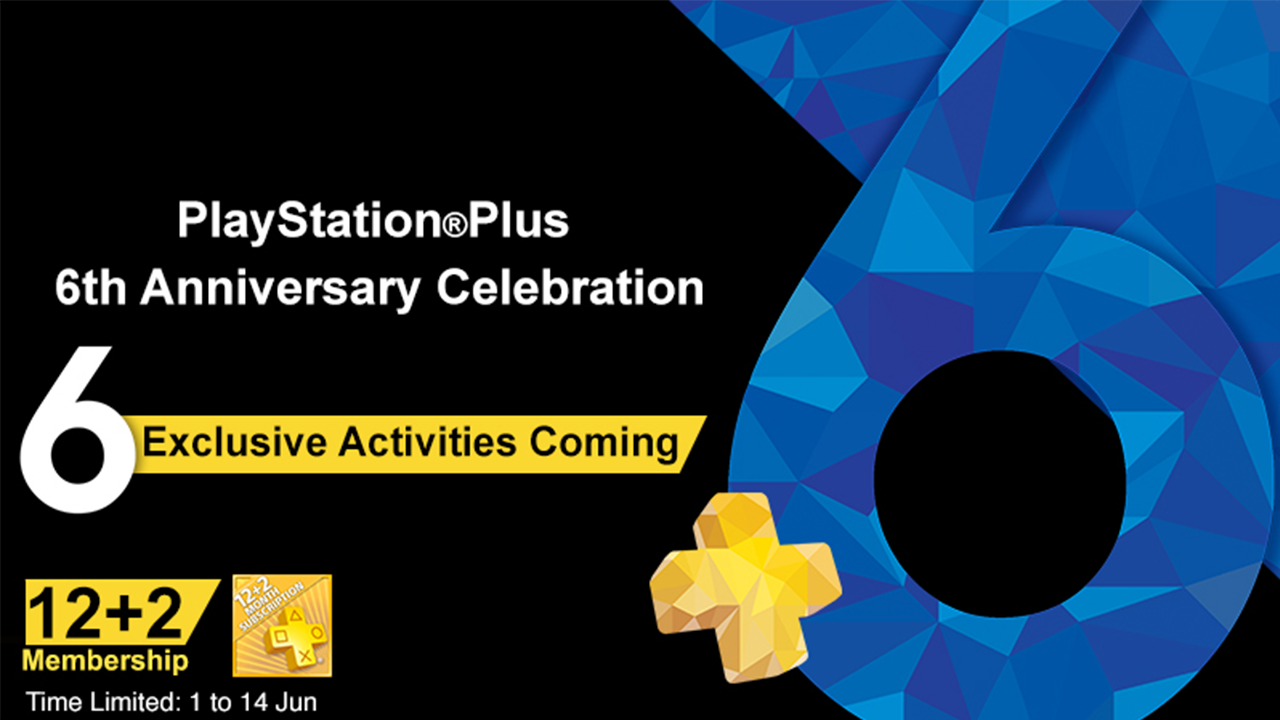 PlayStation Plus turns six this year! To commemorate the event, Sony Interactive Entertainment Singapore* has lined up a slew of exclusive deals for the entire month of June.

The first order of business is to ensure that those PlayStation Plus memberships continue uninterrupted.

From June 1-14, buying a 12-month subscription ($43.90) through the PlayStation Store entitles you to an extra two months of membership.

The 12-month subscription has long been the most valuable pick over the 1- or 3-month alternatives, making this an ideal time to extend your PS Plus membership. Remember: these 14 months will be added to your currently active plan, not overwrite it.

This offer is exclusive to the online PlayStation Store but those without valid payment options need not worry – retailers get a deal of their own.

Available from June 24 onwards, the 6th Anniversary Memorable Pack ($43.90) consists of a special edition 12-month Membership card and a Polygon DualShock 4 Holder, the latter available in either black or white.

If you’d like something handsome to prop up your controller with, and essentially get it for free, then make a point to visit one of the many authorized dealers listed here. Do note, however, that the color of the holder will be picked at random.

From now until June 15, the PlayStation 4 games listed below will be sold at a discount on the PlayStation Store to all users. What makes it a “double discount” is if you have an active PlayStation Plus membership, which drops the final price even lower.

It’s not a terribly long list but it does cover both first- and third-party games, old and new. Fans of multiplayer shooters wouldn’t go wrong with Rainbow Six Siege, whereas Just Cause 3 (sometimes known as Bollywood Simulator) would be the ideal choice for anyone wanting pure, unadulterated action.

And now for something that doesn’t require the least bit of spending. The PlayStation Asia Facebook Page will be conducting a mini-game every Wednesday at 1pm, where participants are to carry out simple tasks for a chance to win a gold DualShock 4 controller or a PSN voucher worth $3.60.

Each week’s winner will be announced on a Friday, with the final mini-game dated for June 22. Just be sure to have a valid PS Plus membership registered in Singapore to qualify.

Free games aren’t exactly an anniversary special but the selection has been upgraded for June.

PlayStation 4 owners will soon own the leading basketball game that is NBA 2K16, as well as banana republic management simulator Tropico 5.

PlayStation 3 users can look forward to all 12 episodes of Japanese horror game Siren: Blood Curse, after which they can go for something a little more therapeutic in the form of visual puzzle game echochrome primal.

On the other hand, PlayStation Vita gets the hack-and-slash God of War: Ghost of Sparta alongside platform game LocoRoco Midnight Carnival.

Other specials include a free download for Street Fighter V Soundtrack PlayStation Plus Edition and a 60% discount on the 4-player co-op title Gauntlet: Slayer Edition, valid from June 9-22.

Ade thinks there's nothing quite like a good game and a snug headcrab. He grew up with HIDEO KOJIMA's Metal Gear Solid, lives for RPGs, and is waiting for light guns to make their comeback.
Previous post Plextor announces new gaming-oriented M8Pe PCIe SSD
Next post Secretlab unveils the TITAN, their largest chair yet