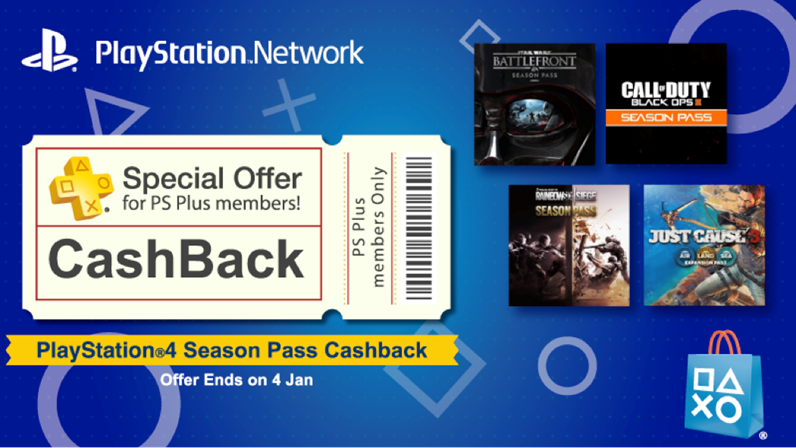 In a final spurt of holiday cheer, the Singapore branch of Sony Computer Entertainment have launched a PlayStation 4 Season Pass Cashback campaign exclusively for PlayStation Plus subscribers.

All PS4 season pass purchases on the PlayStation Store, including those bundled together with games, are now eligible for a PSN voucher worth S$3.50.

This offer can only be redeemed once and will be available until 4 January, 2016 – that’s this coming Monday! The voucher itself will be delivered via system message and is valid until 18 February, 2016.

The campaign includes our neighbors in Hong Kong, Malaysia (RM 10), Thailand (THB 10), and Indonesia (RP 40,000) too, so long as the accounts are registered to their respective countries.

Not sure what to use that promotion on? Browse the PS Store for ideas or consider picking up this year’s big hit, The Witcher 3: Wild Hunt, along with a pass for the expansions Hearts of Stone (released) and Blood and Wine (Q1 2016)

Alternatively, scope out recent shooters such as Call of Duty: Black Ops III and Rainbow Six: Siege, or wreak havoc across an entire island in Just Cause 3. Patient gamers can gain even more value by picking something older from the EA Xmas Sale for an upfront 10% discount.

With DLCs and seasons passes here to stay, all savings are welcome in our eyes. Sure, S$3.50 may not sound like a lot but a bonus is a bonus, and it can help offset next month’s PlayStation Plus subscription or some other digital purchase. Who knows, it might even signal a renewed push by PlayStation Asia to spice up the regional store.

Ade thinks there's nothing quite like a good game and a snug headcrab. He grew up with HIDEO KOJIMA's Metal Gear Solid, lives for RPGs, and is waiting for light guns to make their comeback.
Previous post Review: Fallout 4 (PS4)
Next post Cinematic gaming? Try ViewSonic's projectors