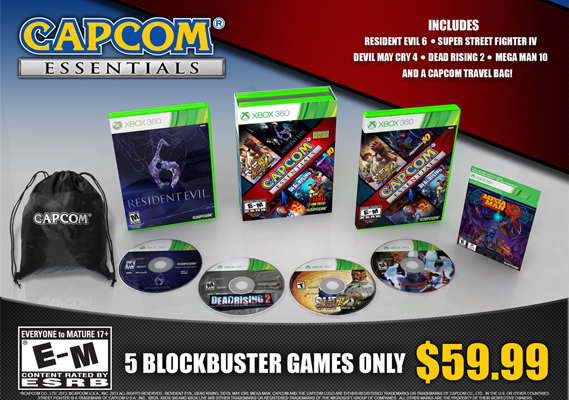 There was a time where getting a bunch of games bundled into a single package wasn’t that great of a deal, especially if it came in a lone cartridge. Thankfully they’re not too prevalent these days. Besides, now that we’re all older, we can simply pick up stuff like Capcom’s Essentials instead.

So what are we getting for approximately SG$76?

While not exactly the best compilation there is — RE6 isn’t one of the better titles in the franchise, and SSF IV isn’t the Arcade Edition used in tournaments now — this whole Capcom Essentials thing is a great way to sample different genres in one discounted grab, particularly for new console owners. Getting a current-gen console is still a valid option after all, what with the cheap prices and wide library of games. They also mention that you can upgrade SSF IV to Ultra Street Fighter IV when it releases next year, so all is not lost.

Although I do have to question their idea of calling a drawstring pouch a “travel bag”.

Capcom Essentials releases 8 October in North America for both the Xbox 360 and PlayStation 3, so expect it to hit local stores sometime then.

Ade thinks there's nothing quite like a good game and a snug headcrab. He grew up with HIDEO KOJIMA's Metal Gear Solid, lives for RPGs, and is waiting for light guns to make their comeback.
Previous post The RGN FIFA Cup on 25 August
Next post The Humble Origin Bundle Is A Steal