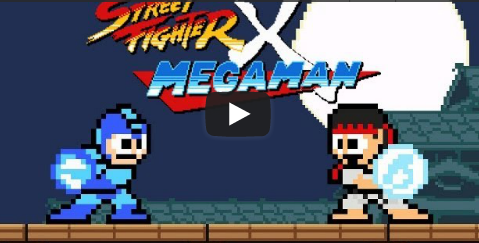 Street Fighter x Mega Man is a true collaboration between a company and its fans. Singaporean Seow Zong Hui, better known as Sonic, created and developed SF x Megaman with direction and support provided by Capcom.

24 year old Sonic is currently in his final year at the Nanyang Technological University’s Engineering faculty, and is also a competitive Street Fighter player who mains Dhalsim. He is currently in San Francisco for this exact game announcement, but is typically based in Singapore. Sources tell us that Zong Hui had only had a few months to make or break this project, with development starting only in the second half of this year. He was also under a non-disclosure agreement to keep the game under wraps.

The game stars Mega Man and features eight original Street Fighter themed levels and bosses inspired by the series. Apart from its retro eight bit art style, Street Fighter x Mega Man also has an original soundtrack created by Luke Esquivel, also known as A_Rival. The mashups of Street Fighter and Mega Man themes complete, according to a Capcom press release, “the crossover of the century”.

“Our fans have been so supportive of the 25th Anniversary efforts on Street Fighter, that we wanted to provide one last surprise and token of our appreciation,” said Christian Svensson, SVP of Consumer Software at Capcom USA.

“This game symbolises the passion and dedication of our fans and with the 25th Anniversary of Mega Man coming up, we felt it was our duty to bring this wonderful experience to everyone who has shared the last 25 years with us and both of these celebrated franchises.”