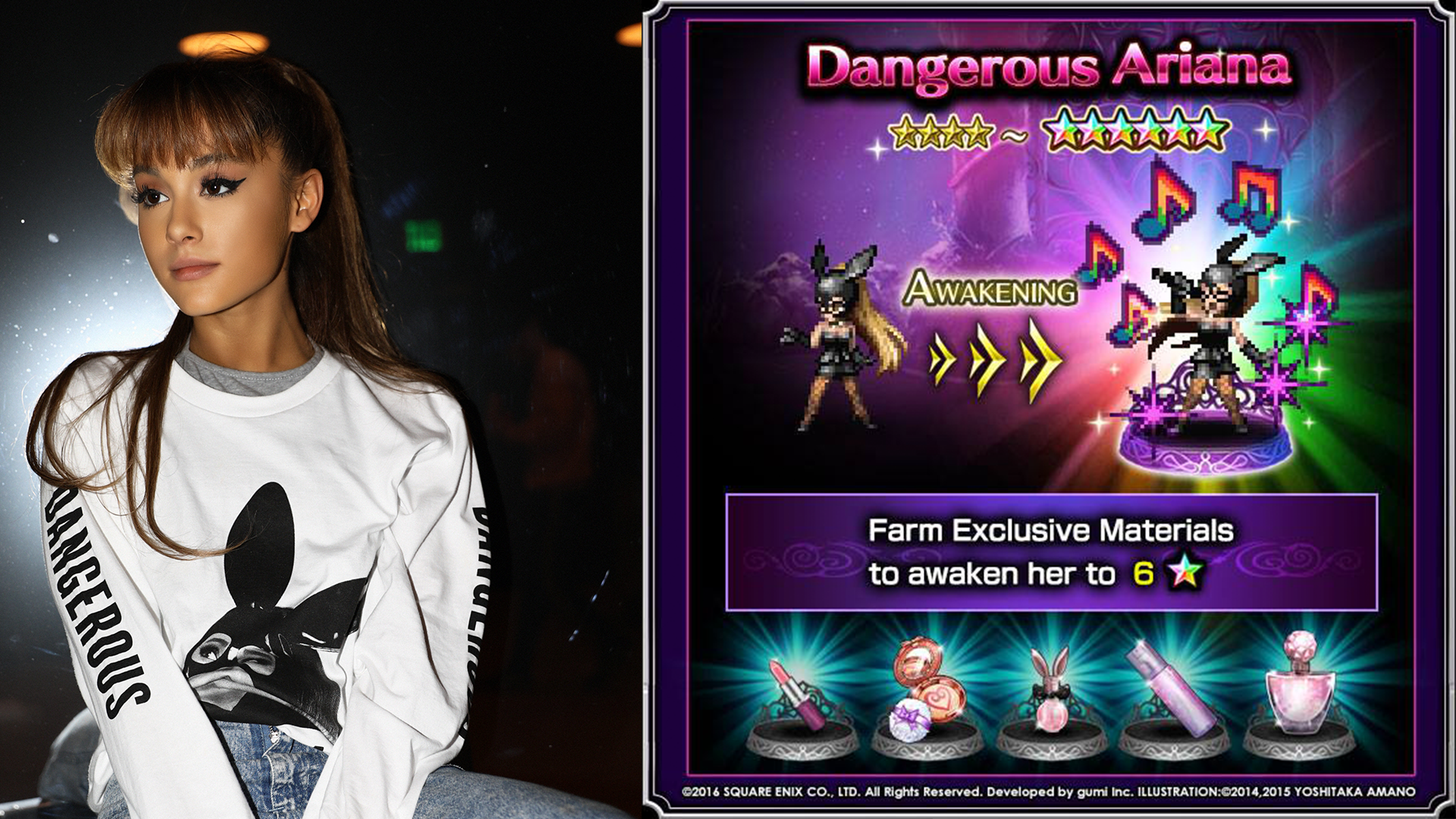 Ariana Grande – American actress, award-winning singer, and one of Time’s 100 Most Influential People – has now made her move into videogames. A Final Fantasy Brave Exvius character inspired by her ‘Dangerous Woman’ album is currently attainable via an in-game event, with community milestone rewards further sweetening the deal.

Exclusive to Gumi Asia’s Global version of the game, Dangerous Ariana is a four- to six-star unit that players acquire after starting the ‘Dangerous Woman Tour’ event. Her two highest stats are Magic and Spirit respectively, with a unique Trust Master reward that boosts Attack and Magic by a whopping forty percent when paired with a harp.

A beautiful singer from a distant world, whose goal is to bring love and grow peace in the realm. Born as a talented young singer, she started performing from a young age. She became committed to her passion for music and eventually became a popular singer.

Dangerous Ariana is a great pick for newcomers who may not have present mainstays such as Exdeath or Dark Fina. Not only is she easy to get, her Thundaga spell allows you to clear the event quests quickly, speeding up the materials farming needed for her equipment and awakening.

Veteran players are looking forward to the community rewards, which starts with 500 free lapis simply for awakening her character once.

Ariana Grande on the collaboration with Final Fantasy Brave Exvius. Her enamor for Japan is widely reciprocated, culminating in a win at the 2016 MTV Video Music Award Japan. (Photo: Gumi Asia)

It doesn’t end there.

With Grande a music star and FFBE the proud owner of an excellent soundtrack, the two have joined forces to do an orchestral remix of ‘Touch It’, her 2016 hit song.

There’s a separate video offering a brief peek into its production.

So there you have it – the very first time an American pop star has made their way into a Final Fantasy title, with an in-game appearance no less.

Ade thinks there's nothing quite like a good game and a snug headcrab. He grew up with HIDEO KOJIMA's Metal Gear Solid, lives for RPGs, and is waiting for light guns to make their comeback.
Previous post Review: The Onion Knights (PS4)
Next post Singapore’s UnVeiL NoVa takes top spot at Call of Duty Asia Championship