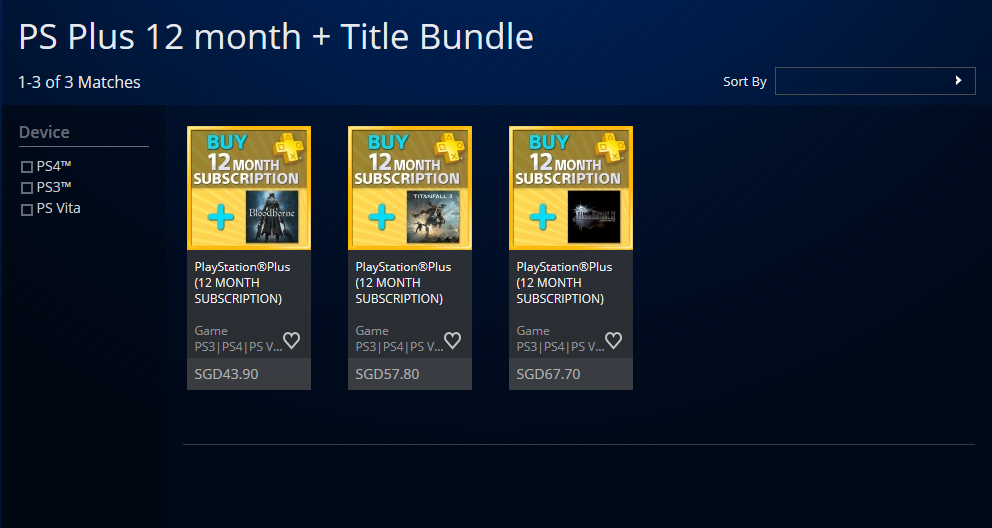 If you didn’t manage to grab last month’s 12+3 month PS Plus promotion then don’t worry, PlayStation Asia are back with another enticing offer. This time they’re swapping out the bonus months for a free game, all of which have piqued our attention.

For reference, the regular price of a 12-month subscription is $43.90.

FromSoftware’s Bloodborne is a killer exclusive, the sort of game that makes some folks bite the bullet and pick up a PlayStation 4. This action RPG is no mere reskin of Dark Souls – it boasts a revised combat system and a setting so enthralling that some consider it the best thing to come out of the “Soulsborne” collection. If you liked Team Ninja’s Nioh then you’d certainly enjoy what the brooding city of Yharnam has to offer.

This edition doesn’t include the phenomenal The Old Hunters DLC, arguably an essential component of the Bloodborne experience. Picking it up separately would set you back a considerable $27.80, which is fairly steep when you consider past promotions featuring a complete edition of the game.

However, it’s hard not to overlook the timing of it all. The Bloodborne Reddit community is rearing up for its annual “Return to Yharnam” event on 10 March, which will see a surge in player activity. That translates to more co-op summons, PvP, and player messages.

Respawn Entertainment’s Titanfall 2 improves upon the pilot-mech blend of combat introduced in the first game, making for a great multiplayer shooter. On top of a highly requested campaign mode – which proved entertaining, as cliché as it was – the sequel adds more pilot skills and mech customization to extend both the game’s depth and longevity.

Titanfall 2 may draw comparisons to the Call of Duty series but they’re truly different beasts, with the former excelling in its sense of speed and Titan tactics. It’s an important distinction to consider, and the small but dedicated player base will be happy to welcome more pilots into their fold.

Square Enix’s Final Fantasy XV can be had for only $23.80 once the PS Plus cost has been factored in. This massive RPG continues the series’ transition into modern gameplay with its approach to both open-world design and combat systems. It’s generally seen as an improved attempt over its predecessor, FF XIII, and is scheduled for a ton of content updates by way of its $29.90 season pass.

The developer has adopted a multi-pronged approach to the series so it’s best to learn about the ‘Kingsglaive: Final Fantasy XV’ feature movie as well as the ‘Brotherhood: Final Fantasy XV’ animated series for better context on the story. You can watch the latter freely on YouTube and simply read the major plot points for the movie – other than pretty CG work and an impressive voice cast, you wouldn’t lose much by not watching it.

Ade thinks there's nothing quite like a good game and a snug headcrab. He grew up with HIDEO KOJIMA's Metal Gear Solid, lives for RPGs, and is waiting for light guns to make their comeback.
Previous post Nintendo Switch scores big in Japan
Next post Disney Crossy Road launches in SEA with real-time multiplayer