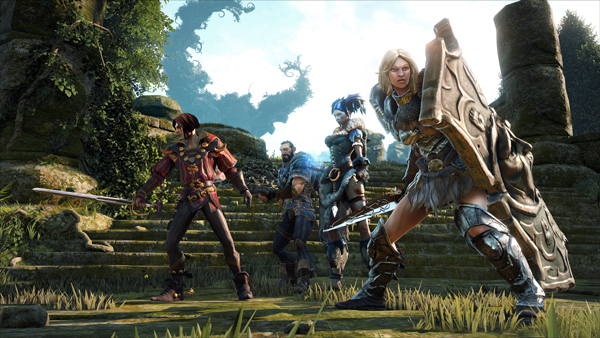 The Fable series has been on a downward spiral but Lionhead Studios are hoping to fix that with a change in formula. Revealed at gamescom 2013 is Fable Legends, an Xbox One exclusive that puts the focus on a party of heroes instead of just one. Unless you’d like to be the villain, that is.

Fable Legends will be set in the familiar world of Albion, one that’s packed with equal amounts of adventure, comedy and tragedy (the last two especially true for chickens). Albion is far more beautiful now that it’s rendered with Unreal Engine 4… or so we’re told since there isn’t any gameplay footage.

What we do know is that the game can be played alone or with three other heroes, either controlled by A.I. or your friends (or strangers on the internet). Lionhead promises you can be any sort of hero you’d like, with abilities and appearances that are fully customisable. Add the usual spread of armour, weapons and treasures to the mix and you have a standard co-op RPG, but probably one with more options than previous Fable entries.

The most interesting update here is the playable Villain. Doing so will grant you control over the “many creatures, minions, traps, and environmental hazards that Heroes must overcome.” It brings to mind the recent Dungeonland by Paradox Interactive and pen-and-paper RPGs as a whole, which should provide enough of a twist to the regular co-op campaign.

This being a next-gen title, Fable Legends will have SmartGlass implementation. For example, those playing as the Villain get to use a compatible device as a private screen if playing couch co-op with a friend. Kinect compatibility is also mentioned but not expanded upon.

Impressive as the CGI trailer is, Lionhead are going to have to provide some convincing gameplay to entice a disappointed fanbase. Should their multiplayer mechanics be up to par then they just might rekindle that Fable magic.

Fable Legends is being published by Microsoft Studios. Release dates to be announced.

Ade thinks there's nothing quite like a good game and a snug headcrab. He grew up with HIDEO KOJIMA's Metal Gear Solid, lives for RPGs, and is waiting for light guns to make their comeback.
Previous post MechWarrior Tactics Public Stress Test Incoming
Next post PS Vita Price Drop Details – Singapore