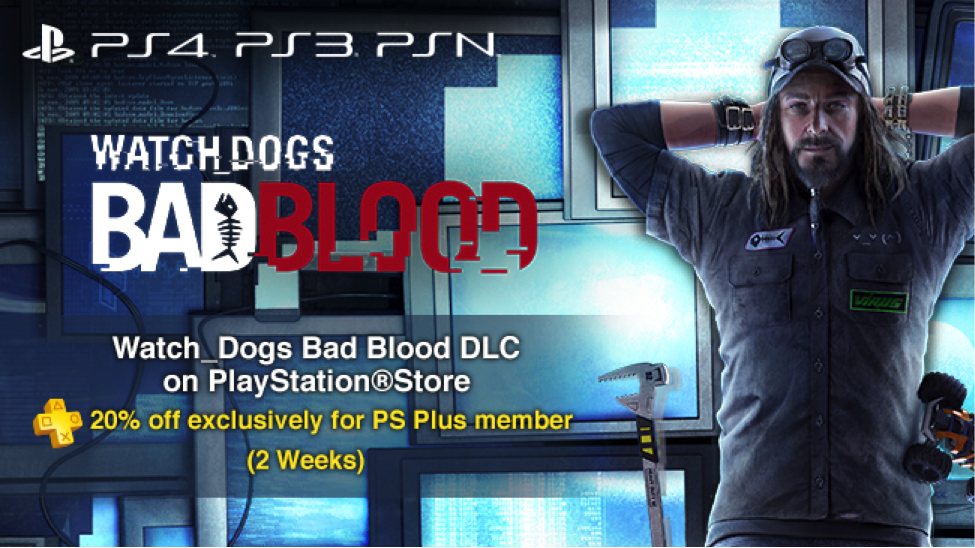 If you are PS Plus members but haven’t bought WATCH_DOGS™ Season Pass yet, it’s the perfect timing to get this brand new add-on on PSN Asia Store during the first two weeks of its release as the add-on will be available at an exclusive 20% off for members. Not forgetting the release of Middle-earth: Shadow of Mordor too!

Beware of the different release dates, as the Chinese and English language of the DLC are just a day apart.

WATCH_DOGS™ Badblood DLC (SGD18) takes place after the events of the main campaign of Aiden Pearce, and spans 10 new missions in new locations across Chicago, giving you the chance to take control of the character of Raymond “T-Bone” Kenney for the first time as he tries to help out an old friend.

And WATCH_DOGS™ Plus members who already owned the Season Pass? You should already be getting this add-on for free with your Season Pass!

Journey to Middle Earth in Shadow of Mordor

Out on 1st October at PSN Asia Store, “Middle-earth: Shadow of Mordor” (English ver.) (SGD74.8) for PS4 is an action-packed adventure-RPG inspired by J.R.R. Tolkien’s “The Hobbit” and “The Lord of the Rings”. Exploring an original story of vengeance and redemption, the game puts players in the role of Talion, a valiant ranger whose family is slain in front of him.

Through the Nemesis System, enemy relationships and characteristics are shaped by player actions and decisions to create personal archenemies that remember and adapt to the player and are distinct to every gameplay session. Gamers are able to craft their own battles, enemies and rewards within the dynamic world that remembers and adapts to their choices, delivering a unique experience to every player.

If you like this game much, the Season Pass (SGD31.2@PS Store) gives you early access to challenge modes, new story missions and access to future contents!

Aaron Yip is an industry veteran with more than 15 years of experience. When not spending time on his gaming PC and consoles, he can be found in Hyrule solving ungodly puzzles and collecting gems.
Previous post Review: Akiba's Trip (PS3)
Next post Interview with Battlefield: Hardline Creative Director, Ian Milham