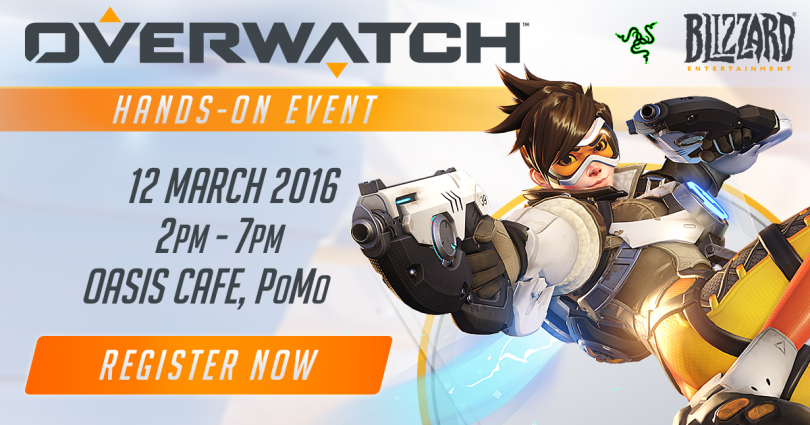 Blizzard Entertainment’s Overwatch releases on 24 May, with an all-access open beta scheduled earlier that month. Diehard fans could pre-order the game for a headstart on that beta, but what if you want to try it as soon as possible? Well, if you’re in Singapore then you’re in luck!

Blizzard Southeast Asia is holding an Overwatch Hands-On event this Saturday, 12 March, at the Oasis Café in PoMo. It’s the game’s first official appearance here and we’re expecting to see a sizeable turnout, considering how exclusive the closed beta currently is.

The event runs from 2-7pm on a first-come-first-served basis. However, a quick registration over at Facebook will score you some priority access instead.

Even so, it pays to be early: Blizzard have garnered quite a reputation for sweetening their local events with free goodies, and this hands-on session will be no different. The first 60 to arrive will get free Overwatch merchandise while the next 100 get their hands on a Razer L33t Pack.

Players will be limited to 2 games per session should a queue for entry start to form. They are of course free to line up again for another session.

Overwatch is a six-versus-six first-person shooter that heavily rewards teamwork, so tell your friends!

If responsibilities pull you elsewhere that day then fret not, the open beta isn’t too far off. It’s dated for 5-9 May and will be available on PC, PlayStation 4, and Xbox One. Those who pre-order will receive two early access codes for the open beta, as well as the previously announced Noire Widowmaker skin at launch.

No progress will be carried over, be it from the closed or open beta.

Ade thinks there's nothing quite like a good game and a snug headcrab. He grew up with HIDEO KOJIMA's Metal Gear Solid, lives for RPGs, and is waiting for light guns to make their comeback.
Previous post MLB The Show 16 batters up for 29 Mar release
Next post Review: Xbox One Elite Controller