Consumer electronics retailer Newstead Technologies is currently running a trade-in campaign called Gift Your Tech until 27 Jan 2017. All 12 of their stores will be accepting old hardware in exchange for vouchers, with 20 percent of the trade-in value donated to TOUCH Community Services.

Getting rid of old PCs, notebooks, tablets, and smartphones isn’t as easy as dumping it into the bin. For one, lithium ion (Li-on) batteries pose a hazardous fire risk when improperly disposed of. Human safety aside, these devices pack materials that are equally hazardous to the environment if they wind up in a landfill.

This is where e-waste recycling programs come in, which in Singapore is outlined by the National Environment Agency. With the Gift Your Tech campaign, Newstead is adding a precautionary step by partnering with trade-in and repair specialists PC Dreams to ensure all user data is wiped clean.

To participate, simply bring your pre-loved item to any one of their 12 locations for an evaluation. Their trade-in value will be presented as a voucher of equivalent value (valid for one year), which can then be used for any item at any Newstead store. Your old product will be whisked away either to be refurbished or recycled.

We suggest reading the terms and conditions on PC Dreams‘ site before making the trip. In short:

More information on the Gift Your Tech campaign can be found at the official site or, better yet, at the roadshow at Marina Square Shopping Mall’s main atrium, which ends on 2 January. 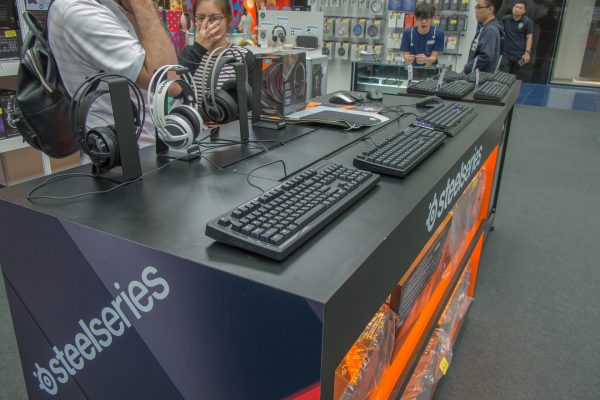 Computers from a number of manufacturers – Alienware, Acer, Asus, Dell, LG, Lenovo, HP, and more – are also out for display, allowing you to get a closer look and feel at the products. Joining them are gaming brands such as Razer, Logitech, and SteelSeries to provide mice, keyboards, and headsets. Keep an eye out for special promotions too!

TOUCH provides a broad spectrum of community services to all walks of life, including disadvantaged children. So far, the Gift Your Tech campaign has raised $10,000. A cheque donation was presented by Newstead’s Head of Operations, Sky Chen, to the Manager of TOUCH Young Arrows, Lawrence Tan, at the roadshow on 28 December.

“We would like to thank our partners for their contributions in making this campaign a success so far. We are heartened that the campaign has received such positive support from the public and hope that they will continue to bring in their e-waste for recycling,” said Mindy Tan, Chief Executive Officer at Newstead Technologies.

Edit — An earlier version of this article mentioned a live demonstration at the road show. It was only scheduled for the first day and will not be a daily occurrence. We apologize for the error.

Ade thinks there's nothing quite like a good game and a snug headcrab. He grew up with HIDEO KOJIMA's Metal Gear Solid, lives for RPGs, and is waiting for light guns to make their comeback.
Previous post Qisahn completes move to new, larger unit
Next post PS Plus Jan 2017: This War of Mine TLO, Goat Simulator, Alienation, The Swindle