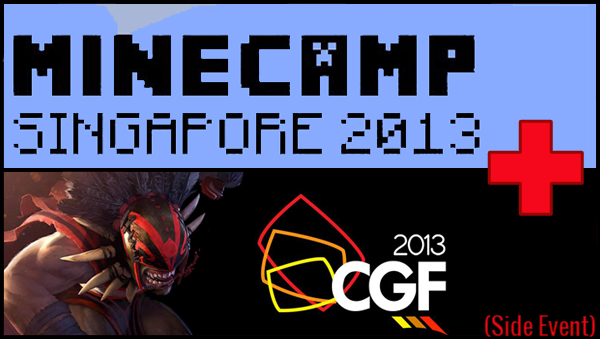 Don’t have plans for this Saturday? Don’t worry; gaming’s got your back this time.

Minecraft terraformers stationed in Singapore shouldn’t miss Minecamp SG 2013, the first local event dedicated to Mojang’s indie hit. Three worlds from the Singapore servers will be on showcase, along with Q&A discussions with the respective creators.

Maybe you’ve dabbled in the game for a bit – built a few wooden sheds, dug a tunnel or two and then wondered what the excitement’s all about. Well now’s your chance to see what this voxel sandbox is truly capable of. Maybe even make a few new friends to finally build that island shrine to [insert-fandom-here] like you’ve always wanted!

Of course, Minecraft has other applications too if you keep an open-mind about it. Joel Levin, for instance, uses it as an educational tool at a private New York school. (If that piqued your interest then this video is for you.)

Even better is the venue, which happens to be at 50 Scotts Road, Level 1 Cyan Room. That’s right above Newton MRT station, so it isn’t terribly difficult to get there. Minecamp SG 2013 will not have an admissions fee.

On the other end of the spectrum, the eSports community will be at the Cyber Gaming Festival Side Event. Taking place at the NUS UTown Auditorium, it’ll feature talks by some of our local professionals. Who, you might ask?

Like it suggests, this is just a side event before the tournaments kick into full swing next week. No matter what you play competitively, hearing the pros talk about their games and eSports (in a South-East Asia context!) would certainly be enlightening in one way or another. Apparently it’s “compulsory for gamers” but the event is also open to the public, so feel free to bring anyone else along.

On a final note, both Minecamp SG and the CGF Side Event will run from 2 to 4pm, so you’ll have to decide on either one. Life is cruel like that.

Ade thinks there's nothing quite like a good game and a snug headcrab. He grew up with HIDEO KOJIMA's Metal Gear Solid, lives for RPGs, and is waiting for light guns to make their comeback.
Previous post Castlevania: Lords of Shadow 2 Scheduled For Winter
Next post Review: Gunpoint (PC)