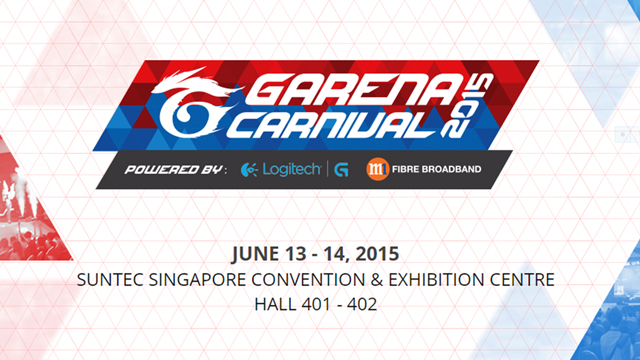 The annual Garena Carnival is back for its fifth year, scheduled to take place at Suntec Singapore Convention and Exhibition Centre on 13th and 14th June. The two-day eSports event will feature live tournaments, game activities, and for the first time ever, a cosplay competition judged by celebrity cosplayers from South Korea.

Boldly displayed on the official website are the words “twice the size, twice the fun” as Garena attempts to draw an expected crowd of 8,000. The local eSports scene has continued to grow over the years, and Zhou Junjie, CEO of Garena Singapore and Malaysia, says that the company views their eventas “the key platform to lead this growth.”

Thus, Garena Carnival 2015 is the final stage for this season’s The Legends Circuit SG, a League of Legends tournament that determines Singapore’s best. Prize money aside, the top teams will battle Malaysia’s own for a chance to represent the region at the larger Garena Premier League.

Accompanying eSports events are FIFA Online 3 Fantasy Cup – Road to Thailand as well as the Blackshot Champions Pride Season 3 Championship. The former will culminate in a match between Singapore and Malaysia to see who moves on the SEA Championship in July, while the winning Blackshot team gets to go home SG$15,000 richer. Let that amount sink in for a while.

Being the huge publisher that it is, Garena will also put out a number of booths highlighting their catalogue of titles. Those preferring to get a little more physical instead can put their throwing, kicking, and shooting abilities to test at various carnival games.

Those activities come with in-game items and Logitech G prizes attached so do make a point to participate! As this is a ticketed event, expect goodie bags and multiple lucky draws too. There’s even a selfie contest running right now for those who call Instagram home.

Here’s the schedule for both days. In addition to the eSports tournaments, the first day will see the introduction of two new games, whereas the second gets the Cosplay Rumble Arena showcase and performance.

Ten cosplayers have been selected to create a League of Legends themed costume for a one- to two-minute skit or catwalk. They’ve already received $200 for getting this far, and a remaining $1,700 prize pool goes to the three who manages to impress on the day. It won’t be easy as professional South Korean cosplayers Aza Miyuko and Hori from 2AO Design are serving as guest judges – the duo will also hold a meet-and-greet session for fans that day.

Tickets can be purchased through SISTIC now. A single-day pass costs $10 while a two-day package is $18. Note that the prices listed exclude any SISTIC charges.

Update: The first 300 attendees on both days will receive a “Garena Master Code” which contains SG$80 worth of in-game codes for Garena’s eight participating PC titles.

Ade thinks there's nothing quite like a good game and a snug headcrab. He grew up with HIDEO KOJIMA's Metal Gear Solid, lives for RPGs, and is waiting for light guns to make their comeback.
Previous post Oculus Rift Ready for Consumers In 2016
Next post Invisible Inc. Out Now, 20% Discount for Mark of the Ninja Owners