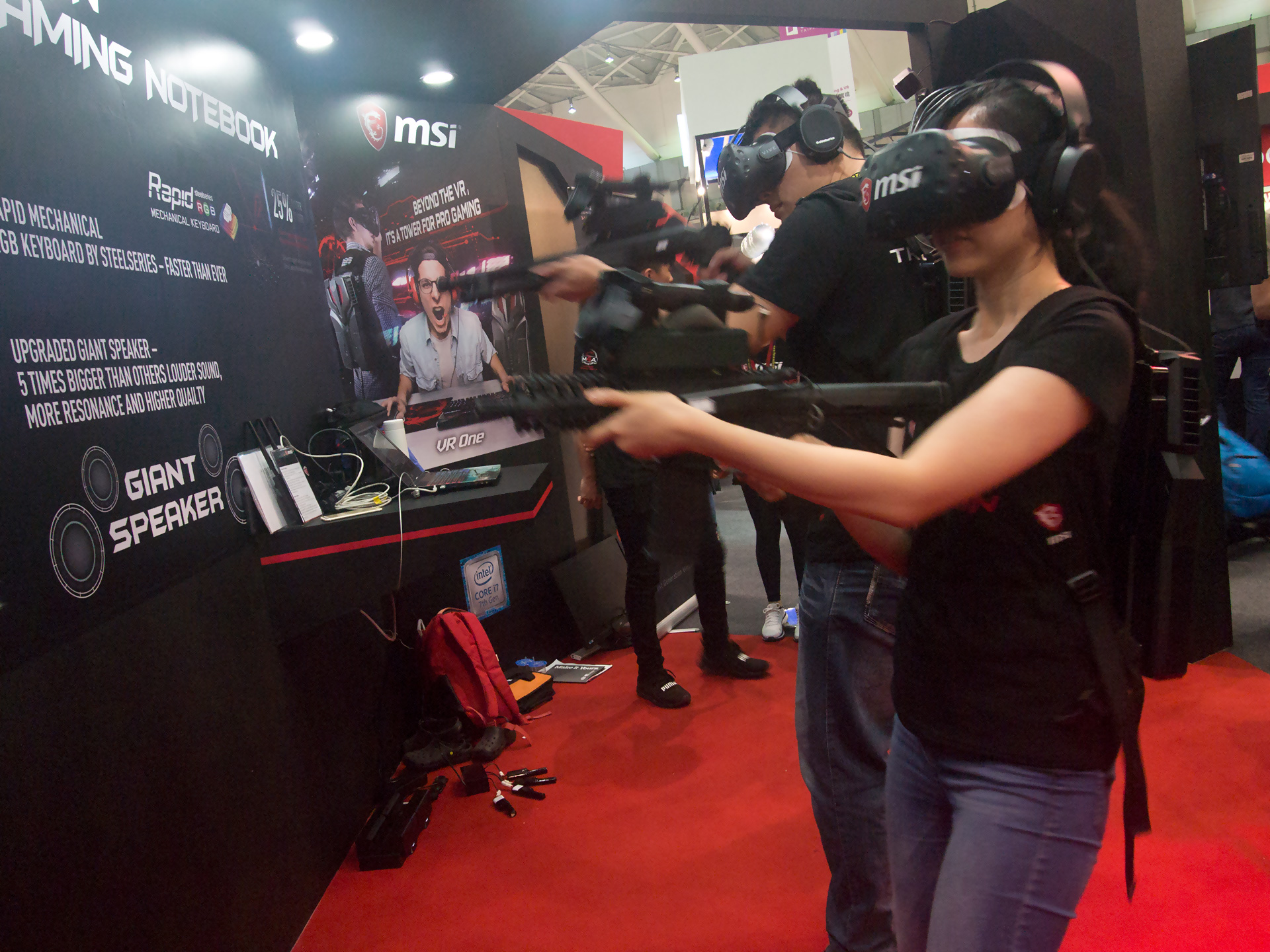 We managed to pay a visit to MSI’s booth within the vast halls of Computex 2017 in Taiwan. As expected of a gaming-focused company, nearly everything they had was a showcase for PC enthusiasts (the other bits were workstations and server hardware), encompassing run-of-the-mill product displays to more hands-on experience zones. Here’s a recap of what we saw during the guided tour.

Given the contents of MSI’s press conference, it’s little surprise that the first order of business was a second look at their new gaming notebooks. Product expert Alex Li headed this first presentation, giving us a refresher of their latest innovations.

Li had an interesting point regarding the size of the GT75VR Titan in the wake of NVIDIA’s Max-Q announcement. In short, reducing the notebook’s size would have resulted in poorer performance due to a lower voltage, and that sort of compromise just wasn’t on the table. Like most performance-driven notebooks, it is targeted at an audience that cares less about a notebook’s physical footprint and more about its raw power.

Of course, that didn’t mean MSI abandoned the idea of sleekness completely – that’s where the GS63VR Stealth Pro and GS73VR Stealth Pro come in. The company already held the distinction of building the world’s thinnest 17- and 15.6-inch notebooks in 2013 and 2014 respectively, so it’s only natural that they’d continue producing thin gaming notebooks.

MSI @ Computex 2017: An update to an existing product, the GS63VR Stealth Pro balances power and portability in a sleek, lightweight chassis.

The GS63VR Stealth Pro packs a GeForce GTX 1070, a 3ms 120Hz display capable of HDR, and MSI’s Cooler Boost Trinity among other things, yet weighs only 1.9 kilograms. Complementing that light weight is its 17.7 millimeters thickness, giving even some Ultrabooks a run for their money.

Unlike the Raider variants, the Stealth line foregoes any accents on its lid, making for a clean exterior aesthetic. Only the MSI logo teases the fact that all the fun has been reserved within, from the per-key RGB mechanical keyboard to the clearly gaming-oriented hardware configuration.

MSI @ Computex 2017: It isn’t obvious but this GE63VR Raider can get extremely loud – in a good way – thanks to its aptly named Giant Speakers.

Those that don’t mind making a statement could opt for either the GE63VR Raider or the GE73VR Raider. Inspired by exotic sports cars, their design incorporates angles, protruding lines, and thin accents to give identity without being overly flashy. And just like a sports car, chances are you’ll hear the new Raiders before seeing them.

While it touts MSI’s latest innovations such as the 3ms 120Hz display and per-key RGB mechanical keyboard, hidden within these systems are Giant Speakers – that is, a combination of an audio chamber that is five times bigger than regular designs, with speakers two-to-three times larger than similarly sized notebooks. Enhanced with Dynaudio, what you end up with is a new level of audio immersion, capable of reaching over 105 adjusted decibels. That means you no longer have to max out your volume levels on a daily basis, with more than enough headroom to fill a house with sound.

MSI @ Computex 2017: When a notebook sees as much work as it does play, MSI’s Prestige range strikes the fine balance needed in terms of performance and design.

While the new notebooks are less ostentatious, MSI are aware that the black-and-red color scheme and RGB lighting still screams “gamer”. Not everybody wants that, especially if the notebook has to pull double-duty at the office.

In comes the Prestige series, swapping the sporty black and red for a tasteful silver while retaining notable hardware and capabilities — True Color 2.0, Dynaudio, Cooler Boost 4, and more, including support up to Intel’s i7 H Series and NVIDIA’s GeForce GTX 1050. It’s a fine balance between work and play, with an aesthetic that won’t raise eyebrows over its purpose. The number keypad is also a welcome inclusion given its business aspirations.

MSI @ Computex 2017: If you’re getting serious about work then the WT73VR desktop replacement will gladly step up to the plate with its hardware and ISV certification.

Those in need of a beefier workstation don’t necessarily have to look outside of MSI. Showing off its Matrix Display capabilities was the WT73VR, a VR-ready machine designed for creative professionals. Supporting Intel’s Xeon E3-1505M processor in conjunction with NVIDIA’s Quadro P500 16GB graphics card and 64GB of DDR4 ECC memory, this 17-inch notebook is packed with enough features to be a desktop replacement. Critically, it’s ISV (independent software vendor) certified so Adobe, Autodesk, SolidWorks, and PTC software are guaranteed to run optimally.

Travel-prone creatives can instead turn to the thinner and lighter WS63 and WS60 15-inch workstations. While their hardware configurations vary, they keep the essential Quadro graphics card support and ISV certification. Meanwhile, the WE72 and WE62 models are positioned as “a workstation for everyone” by balancing cost and performance.

MSI @ Computex 2017: Get all the power of a gaming PC in the form factor of a console with the Vortex G25, the slimmest VR-Ready package available.

Shifting gears, we leaped back into the gaming realm starting with MSI’s compact solution, the Vortex G25. Taking advantage of the Cooler Boost Titan tech they developed for notebooks, the 2.5-liter desktop is small enough to stand alongside current-gen consoles without looking out of place. When it comes to performance, however, this is all PC, with enough power to run enthusiast VR content. The G25 takes Intel’s i7 processors as well as NVIDIA’s GTX 1070, capable of supporting Super Raid 4 as well as 64GB of memory. High-Resolution Audio ensures that your ears get the proper treatment too, especially given the immersive nature of VR. Thunderbolt, Quick Charge, and USB-C connectivity provides the full breadth of connectivity available on newer desktops.

MSI @ Computex 2017: The Infinite A desktop is MSI’s ultimate blend of power and customizability, designed with future component upgrades in mind.

On the other end of the spectrum is the Infinite A, a top-of-the line gaming desktop that keeps the future in mind. Out of the box we’re looking at an Intel i7 CPU and MSI’s GeForce GTX 1080 GAMING GPU, with a combination of SSDs and HDDs boosted by Intel Optane and support for 64GB of memory. Separate airflow chambers managed by Silent Storm Cooling 3 enhances cooling, while Mystic Light RGBs lets you show off the fancy rig at LAN parties (which can you lug the desktop to thanks to an integrated carrying handle along the top).

What makes the “Infinite” part of its name is the fact that you can easily upgrade its components, with space and accessibility fused into its design. Sharp-eyed readers will notice that the GPU is slotted at an upright position, which we’re told is to reduce weight and handling stress on the port.

MSI @ Computex 2017: The Aegis Ti3 is everything you’d expect out of a high-end gaming desktop, with a genuinely cool sci-fi aesthetic tying it together.

Up next was the bolder Aegis Ti3, a more conventional approach to gamer design. The triple monitors block the view but, as a whole, the chassis looks like a robot’s head. It’s pretty neat as far as these designs go – the stand passes for a neck while also giving the case a slight forward incline, with what appears to be a visor and mouth grille on the front and antennas (headphone stands) on its sides.

The Ti3 isn’t all looks, though. This beast takes up to two MSI GeForce GTX 1080 GAMING graphics cards in SLI, with an Intel i7-7700K providing 16Gb worth of system-boosting Optane support. Expect to see plenty of other MSI innovations as well, from Silent Storm Cooling 3 Pro and Mystic Light RGB to an ESS Sabre HiFi DAC with Audio Boost and Nahimic enhancements.

MSI @ Computex 2017: Get a bump to your M.2 SSD support with the MSI Gaming Storage Card, for when regular PCIe HDDs and SSDs just don’ cut it.

Neighboring the Aegis Ti3 was this curious-looking add-on, the MSI Gaming Storage Card. Basically, it’s a PCIe x8 interface that provides two extra M.2 NVME slots arranged in RAID 0, providing data transfer speeds at a blazing 7200 MBps. It comes with an additional 2.5-inch HDD, a custom fan, and super capacitors to protect data from any sudden power loss. It’s clearly in the realm of hardcore gaming enthusiasts who want the extra speed “just because”, though its value may catch the eye of creative professionals too.

MSI @ Computex 2017: These Trident 3s are another option for smaller gaming PCs, with the size and color to roughly match current-gen consoles.

Transitioning back to PCs, we have Trident 3 desktops in black, Arctic white, and a test sample in Iron Man colors – MSI says they might add the last one to regular production if there’s enough demand. The 4.72-liter Trident 3 is a console-sized VR-ready machine that can be placed either vertically or horizontally, an alternative to the Vortex G25 we were shown earlier. It takes Intel’s Kaby Lake series and NVIDIA’s GeForce GTX 1070 so you aren’t compromising on performance, while MSI’s Silent Storm Cooling 2 technology keeps it running nice and quiet.

The final product on our tour was a quick Mystic Light showcase featuring the MSI X299 GAMING PRO CARBON AC motherboard (outfitted with an MSI CORE FROZR L CPU cooler) and the MSI GeForce GTX 1080Ti LIGHTNING Z graphics card. The former supports Intel’s latest Core-X series CPUs and thus has an X299 chipset inside, while the latter is based on NVIDIA’s flagship 1080Ti model.  Exchangeable heat sink covers and customizable nameplates means you can tweak the aesthetics of both beyond just RGB lighting schemes.

With some remaining time left on the clock, we wandered the rest of MSI’s massive booth to snap photos of whatever else we could.

Stay tuned for a behind-the-scenes look at how MSI’s gaming notebooks are made.

Ade thinks there's nothing quite like a good game and a snug headcrab. He grew up with HIDEO KOJIMA's Metal Gear Solid, lives for RPGs, and is waiting for light guns to make their comeback.
Previous post The new tech for MSI’s ‘Next Gaming Dimension’
Next post Cristiano Ronaldo is your FIFA 18 cover star