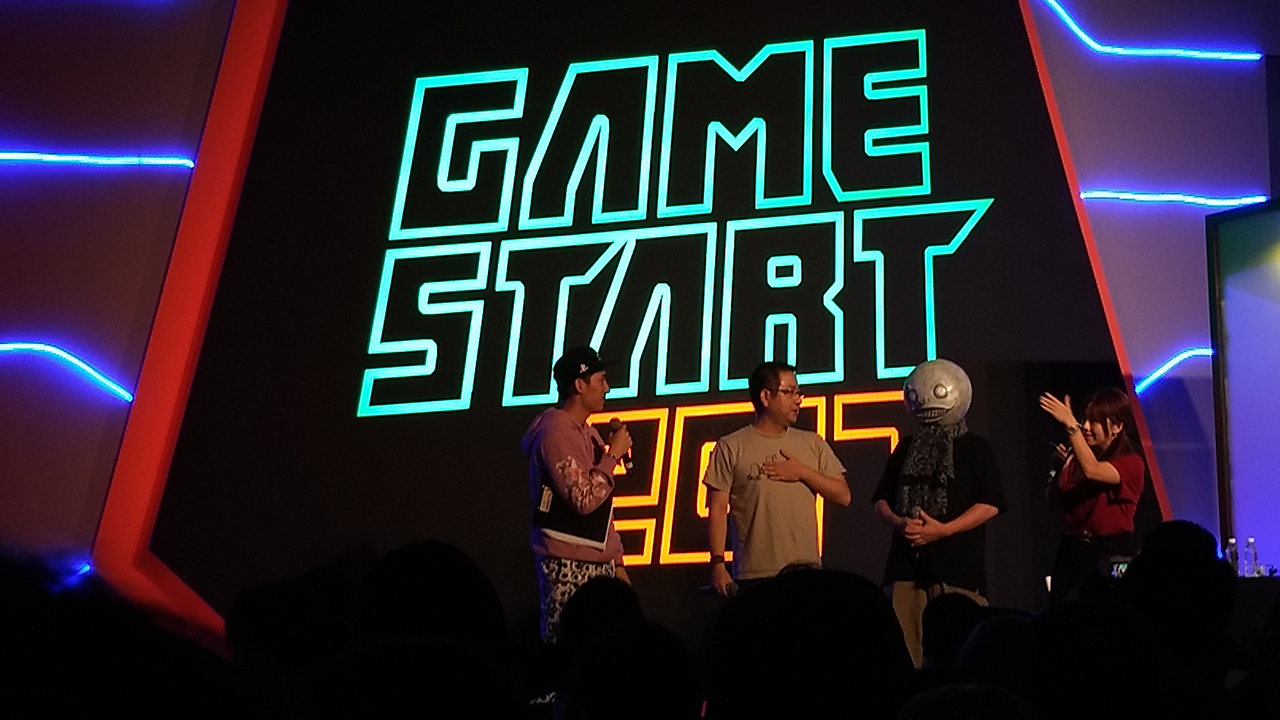 We all have our heroes. John Romero, Hideo Kojima, the late Saworu Iwata – developers enshrined in video gaming history for their work and its impact. Over the weekend, fans of NieR: Automata and the franchise at large got to meet their personal hero: director and creator Yoko Taro. Together with Square Enix producer Yosuke Saito, the two flew in to Singapore for a special guest appearance at GameStart 2017.

The convention’s first day (14 Oct) saw a forty-minute stage talk where the pair fielded questions from fans. It covered a wide selection of topics, both personal and game-related. On character design, Yoko said the black outfits were based on Japanese funeral wear, symbolizing that the characters were dead, while the blindfolds were a more literal representation of not seeing the truth.

The idea for players sacrificing their save data, a mechanic first seen in NieR: Gestalt, traces back to Yoko’s childhood. He recounted his days playing Dragon Quest III when, without warning, the save file was lost. His parents couldn’t understand why he was so upset afterwards, thus spurring him to let others experience how he had felt.

Ever the crowd pleaser, Yoko did take on a more serious tone when talking about the multiple endings. Given all the feedback about his games being too dark, he strived to make all the endings in Automata a happy one, something he believes he’s achieved – even the one with a mackerel, which happens to be Saito’s favorite joke ending.

When it comes to inspirations from other media, Yoko cited Japanese anime Neon Genesis Evangelion and American TV series 24, though he prefers “stealing” ideas from lesser-known properties since they’d be less easily recognized.

As for the future, he is open to working on any game, be it something family-friendly or even a dating simulator. Email Square Enix, he joked, so long as fans can stomach all the characters dying.

Producer Yosuke Saito answering questions on stage while director Yoko Taro hides in a frosted box in the background.

Naturally, the two also took the opportunity to throw playful jabs at one another. Responding to a question, Saito said that there was nothing about Yoko that he respected. The latter swiftly countered by expressing admiration for the producer’s many alleged mistresses, drawing laughs and a sheepish “Next, next [question]” from the producer.

A later segment discussed the results of a local poll set by Yoko and company, featuring topics such as player demographics, play time, and some interesting fan preferences.

There’s quite a bit of light-hearted fluff in there, but at least we now know that that both Yoko and Saito like the country enough to want to stay forever. Here’s the man himself indulging in some chicken rice for lunch.

Ade thinks there's nothing quite like a good game and a snug headcrab. He grew up with HIDEO KOJIMA's Metal Gear Solid, lives for RPGs, and is waiting for light guns to make their comeback.
Previous post In Photos – GameStart 2017
Next post GameStart 2017: Indie picks from Founder’s Base