GameStart 2017: Indie picks from Founder’s Base 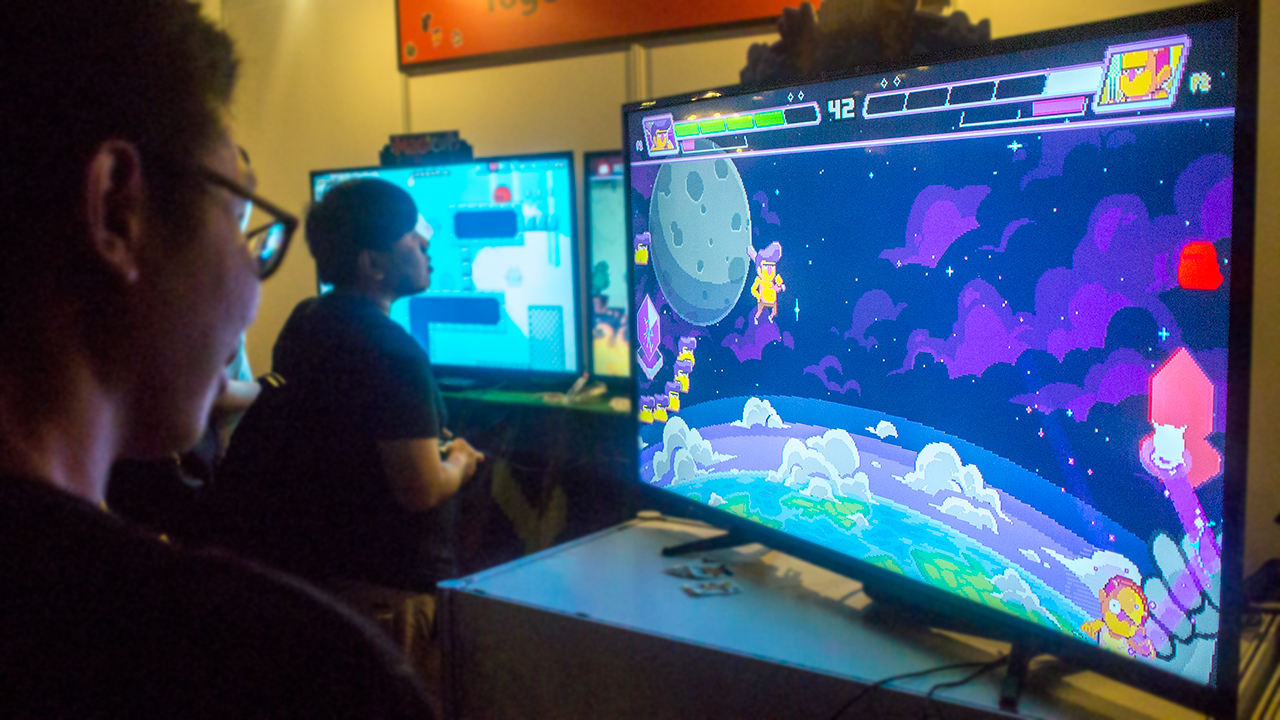 Once again, the Founder’s Base at GameStart 2017 proved to be a treasure trove of local and regional independent games. This year’s edition saw studios and companies representing Singapore and beyond, all showcasing titles in various stages of development. Here are of some of our highlights.

This Indonesian studio has been kicking around since 2009, starting out with web games before proceeding into mobile and desktop. However, their GameStart showcase was for a whole new chapter in the company’s eight-year history: indie publishing. First announced in May 2017, Toge had struck deals with several developers across the country to help push Indonesian talent onto the global stage.

All but one of the games on display were still in development, yet the demos had no problems attracting crowds of players and on-lookers. Leading the pack were Hellbreaker by Tahoe Games and Ultra Space Battle Brawl by Mojiken Studio.

Hellbreaker is a “vertical platformer roguelike” which immediately brings Downwell to mind, except this has you jumping out of hell and upper-cutting the maws of demons. The visual design and controls felt on point, with combos, upgradeable skills, and boss fights to boot. On the other hand, Ultra Space Battle Brawl is very much a couch party game that, according to official descriptions, blends Pong and fighting games. Just look at it: half-naked, pompadour-toting men with bats in low Earth orbit? What could possibly go wrong?

Winner of the ‘Best Meaningful Play’ award at this year’s IMGA (International Mobile Gaming Awards) SEA, Lyrica (陽春白雪) is the debut release from Taiwan-based RNOVA Studio. It’s a tap rhythm game with holds and slides not unlike Cytus, although the launch next month will only be for Taiwan, Hong Kong, and Japan – key markets for mobile rhythm games.

There’s a story that unfolds as the player progresses although two facts help separate Lyrica from the rest. The first is that all the music are from songwriters in Taiwan, whereas most usually include Japanese and Korean music. The second is that those songwriters include Taiwanese aborigines, turning Lyrica into a cultural platform for the natives. Yet another studio from Indonesia, Critical Forge may be new but their ambitions are gargantuan. Forged of Blood is, to oversimplify things, a fantastical take on XCOM. There’s the strategy map where the figurative chess pieces are moved, a castle to muster one’s holdings, and the turn-based tactical combat to drive it all.

I say oversimplify because Forged of Blood isn’t quite XCOM with swords. For one, there are no character classes, only weapon types and magic. The former comes with a whole myriad of abilities and skill trees, while the latter involves actual spellcrafting – in their words, there are “six different Primordials, eight effects for each, twelve effect modifiers, and twelve global modifiers to shape the spell as a whole.”

On the strategic layer, players will be moving three parties of five, tackling quests that either serve the larger story or to help claim territory. In turn, their actions affect a Personality Plot, diverging from the binary “good” and “bad” morality systems to something that better represents grey areas. Critical Forge points to the pen-and-paper RPG Pathfinder as inspiration, and they know they’re going after a niche market here. If they pull it off, however, they’re in for some dedicated attention from strategy fans.

SUTD (Singapore University of Technology and Design) Game Lab provides an excellent peek at budding indie titles and first to catch our attention is Pixie Drop. It won’t take long for older gamers to recognize the Lemmings inspiration in it (or The Incredible Machine according to the devs), though given a slightly modern twist by including bosses.

No, don’t worry, it’s still purely a puzzle game. Players guide a marching troop of Pixies through modifying the environment, planting a springy mushroom here or attaching a vine ladder there.  The bosses are automatically fought towards the end of the level, adding a touch of liveliness to what would otherwise be an anticlimactic end. It feels simpler than the Lemmings classic, though that could simply be due to the game’s early levels.

Unfortunately, the project is on indefinite hold. The Binary Pudding team are still busy with their respective school assignments and aren’t sure if they’ll push for a mobile release.

Picture a turn-based tactics game but on a 2D plane. That about sums up A Hunter’s Tale’s combat design, where a lone hunter takes on larger, scarier beasts via careful planning and positioning. Turn order is represented on a bar, with actions to move, attack, or use a tactical ability. These abilities are not fixed but purchased via gold prior to the fight, the player tailoring their skillset for each individual battle.

Yet the best thing about A Hunter’s Tale is their implementation of risk and reward, as players may opt to make a battle harder to clear objectives faster. You wouldn’t want to overcommit, however, as losses deducts your gold balance.

While the core gameplay mechanic seemed compelling enough, this is yet another project that won’t see completion – with their internship programme now over, the NaNic team are about to go their separate ways.

Ade thinks there's nothing quite like a good game and a snug headcrab. He grew up with HIDEO KOJIMA's Metal Gear Solid, lives for RPGs, and is waiting for light guns to make their comeback.
Previous post GameStart 2017 – Nier: Automata stage talk recap
Next post Gintama Rumble unveils its first trailer and fan-voted DLC