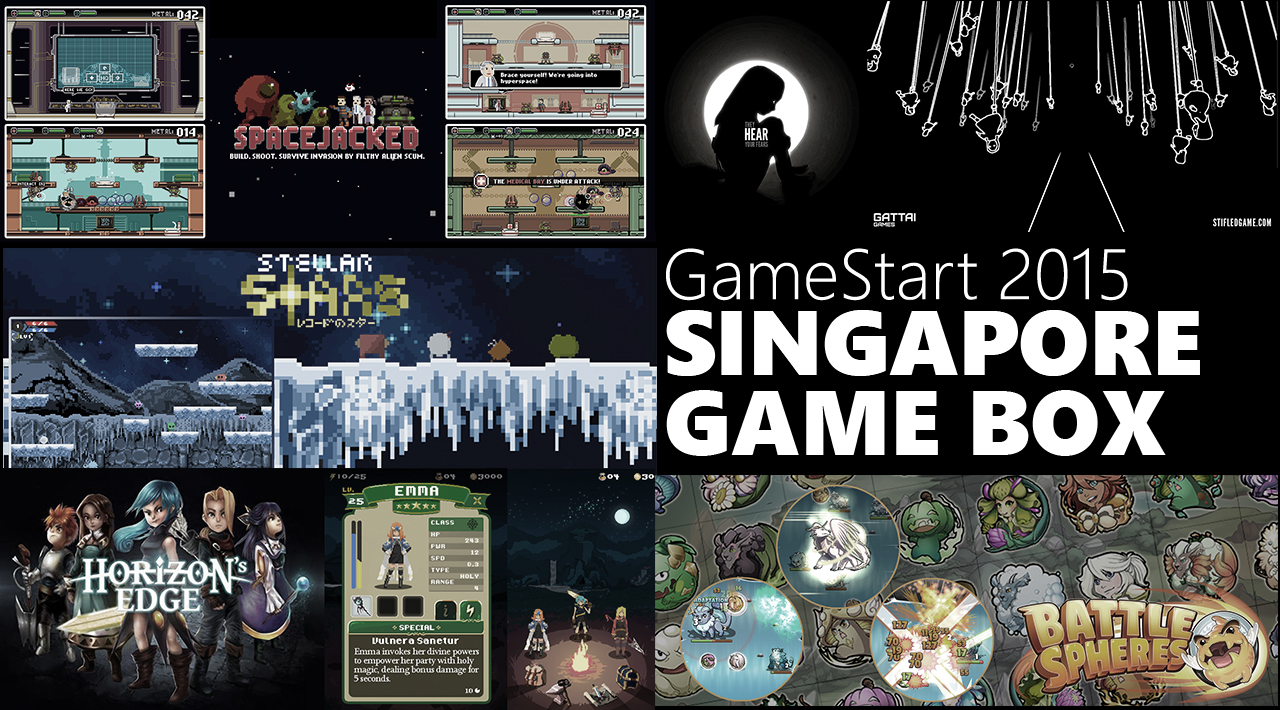 Singapore Game Box by the Games Solution Centre did an excellent job showcasing the many faces of the local indie development scene. On one hand it demonstrably showed how fun some of those SG50 mobile games really are, while at the same time proving that there are excellent games being made by Singaporean teams. Here are some of the titles we enjoyed most.

There’s lots to love about Spacejacked. What initially seemed like a 2D platformer turned out to be an enjoyable arena shooter with helpings of tower defense tossed in the mix. Players are tasked with defending multiple quarters aboard their ship, teleporting from screen-to-screen to blast away at aliens while tending to defense turrets. You’ll have to be selective with what you build and how many too, as both metal resources and turret nodes are in limited supply.

What’s more, Spacejacked is really well produced, featuring a soundtrack I just can’t wait to hear more of. Rather than take my word for it, go try out the demos available on Steam and Gamejolt – 2016 couldn’t come soon enough.

What’s worse than playing a horror game? Playing a horror game that inhibits your vision, of course. Spiritual successor to student game Lurking, Stifled utilizes echolocation to light up the way, so to speak, and it just so happens that the sounds we make attracts unwanted attention too. What’s cool (or demented) about it is that players can plug in a microphone to control the intensity of their locational pings; just expect the opposite to be true when it comes to startled gasps or, heavens forbid, screaming – Twitch is going to love this.

Gattai Games says there’s a story tying it all together, and that we’ll be coming across different kinds of monsters along the way too. Whatever these are, I hope they stay distracted.

Stellar Stars taps on both the MOBA and roguelite genres, having players battle it out on procedurally generated arenas filled with mobs, ability drops, permanent deaths, and even bosses. Designed for both single- and multiplayer, the game comes with alternate characters and an online league. Controls felt responsively tight for the most part, and like any good roguelite promises a learning curve that demands skill to progress. The music’s pretty sweet, too.

At the moment Stellar Stars is still in alpha, with a publicly available demo (three levels worth) up for download at their official site. Developer David Lin says he’s aiming to get Stellar Stars on Steam via Greenlight shortly.

Right off the bat, most players would find that the combat in Horizon’s Edge is somewhat challenging. Featuring three vertical lanes, players have to rotate their spearhead formation either left or right in order to activate the leading hero’s ability. Thus, both party composition and timing are going to be important, and the huge roster of characters means there’ll be plenty of experimentation going on to find those perfect combinations. Over 100 levels will be available at launch.

Inspired by the likes of billiards and carom, Battle Spheres is a real-time action RPG where players “slingshot” their units on the battlefield to both deal damage and get into strategic positions. These Battle Spheres follow the usual collect-train-evolve methodology, making the combat system its primary appeal. Multiplayer-wise, you can choose to rope your friends in for some co-operative matches or simply head to the arena for some PvP.

[Full disclosure: I personally know one of the developers from my tertiary education days.]

Of all the SG50 games available, Kan-Cheong! Kopitiam Saga was easily the most entertaining in terms of a quick pick-up-and-play session. Developers Mojocat cite Konami’s Bishi Bashi games as an example and the comparisons are clear as day, although Kopitiam Saga substitutes Japanese aliens and other whacky scenarios with concepts closer to home. They’ve also added a neat feature that lets you sabotage friends by blocking their screens with cute (and collectible) spiders, making for a great party game. Oh, you even get your very own pink IC in-game too.

Satay Club could be best described as a light business simulator, although not in the dollars and cents perspective. Here, players step in the shoes of an immigrant during modern Singapore’s early history; the 1940s to be exact. What initially seemed like an exciting opportunity turned out to simply be a satay stall, though the protagonist takes it all in stride and makes the best of it. The gameplay itself is very simple – tap to attend, cook, serve, and repeat – though you can probably imagine how hectic it gets once the stall grows popular.

Mr Afzainizam’s latest game, Ice Cream Uncle, works on a similar principle. The solo developer says he wants his games to tell a story, and that the medium can help people relate with the everyday lives of Singaporeans working these iconic jobs.

Wondering where titles like Holy Potatoes! A Weapon Shop?! or Dusty Raging Fist are? We have separate articles for those: our thoughts on Holy Potatoes’ new Spud Tales DLC will be coming shortly, whereas Dusty Raging Fist didn’t raise enough funds for their Kickstarter. You can also find our early impressions of Masquerada: Songs and Shadow over here.

Ade thinks there's nothing quite like a good game and a snug headcrab. He grew up with HIDEO KOJIMA's Metal Gear Solid, lives for RPGs, and is waiting for light guns to make their comeback.
Previous post Here’s a peek at Phantom of the Kill’s new Killer Princes
Next post Stellar Stars hits Indiegogo and Steam Greenlight