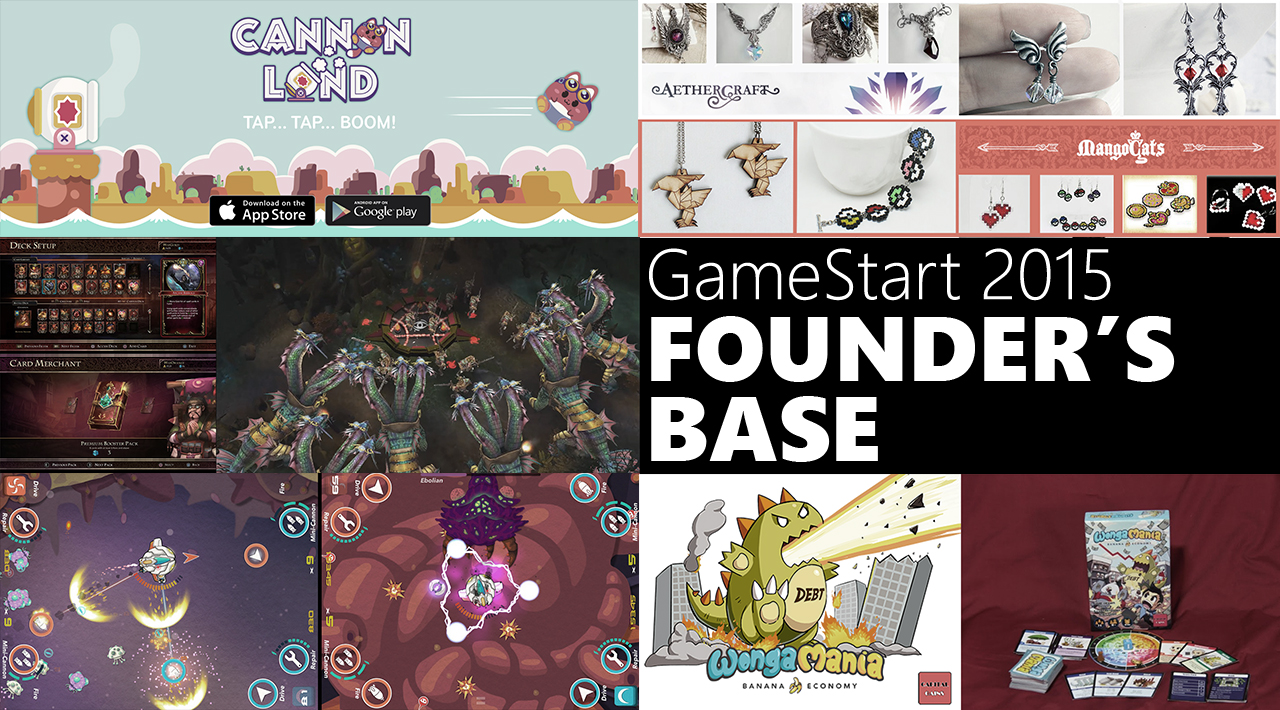 With all the things there was to see at GameStart 2015, you may have missed out on a booth or two. Founder’s Base, located at the back of the hall, was where an assortment of exhibitors and indie developers called home. Here’s a round-up of our favorites.

Rock Nano Global are on the monumental task of bringing real-time strategy onto consoles. It’s been done before – Tom Clancy’s EndWar is a great example – but the local studio are taking a different approach, imbuing deck-building elements to retain depth and complexity, while still having it feel great on a controller. From the look of things it worked out really well.

ArmaGallant offers players five elements, three unit classes, and over a hundred unit and spell cards to construct their deck (of destiny). The main objective is to reduce the enemy teams’s health bar in any combination of ways: capturing control points, securing Artifacts, or simply putting down minions. That last one makes summoning units a risk-reward juggling act; a stronger one can go the extra mile but your team will feel its death very keenly.

Expect to hear more in the coming months.

TernTek’s founder, Min-Hong Tsai, really loves co-op games. Seeing that the App Store was severely lacking in this regard he created Monster Medic, a wonderful shared screen co-op shooter that he hopes to play with his son eventually. At a glance it brings to mind Lovers In A Dangerous Spacetime, except here both players get their own set of thrusters and guns.

What truly makes it a co-op experience is the focus on teamwork. For example, having both players align their thrusters grants a speed boost to zip away from danger, a scenario that will become increasingly common as the arenas progress. The Taiwanese developer isn’t fond of advertisements or in-app purchases so Monster Medic does come with a price tag, though that shouldn’t deter anyone from this gem – if anything we should reward the studio for not locking content (ship upgrades and power-ups) behind random paywalls.

Monster Medic will be heading to Apple TV soon. No plans for Android, unfortunately.

It’s easy to mistake Valiant Force for a localized game, given the aesthetic and Japanese characters all over the place. In reality this is Singapore-based studio XII Braves’ debut title, inspired by everyone’s beloved Final Fantasy Tactics. How so? Well there’s a 3×6 battle grid for one, but the proof of the pudding (or rather, purin) lies with the heroes themselves – six classes that progress into a job tree two levels deep.

Valiant Force is still a modern mobile game so features such as hero summoning and a garrison builder are all present. Interestingly you can craft consumables too, alongside weapons and armor. Let’s hope they pay close attention in crafting the story, as the setting and plot twists of The Lion War in FF Tactics was just as essential as the combat.

Developed on Moai, don’t let Cannon Land’s cutesy appearances fool you. Think Flappy Bird but with cannons, trajectories, and a far greater level of polish. Bullets and Cannons can be swapped via a gacha prize system but they’re purely cosmetic – the environments and music changes too – since the 2-person team from Barcelona believes in competitive skill, not racing for upgrades.

What started out as a creative outlet for video game passion soon turned into a commercial endeavor for Singaporean designer Uenki. Completely self-taught, her MangoCats line has been running for four years now, whereas AetherCraft only launched a year ago – you wouldn’t think so after looking at those beautifully intricate designs.

Primarily sold on Etsy, she secured a GameStart booth to gauge local interest. While the response didn’t turn out to be as great as she had hoped, Uenki says the experience was still largely positive. “It was really awesome to see and chat with people that get what I was trying to achieve with my jewelry. And of course I’ve learnt a lot through the event and it gave me many ideas on how to improve my works and displays.”

Nothing screams Singaporean quite like a card game about economics. And while an educational game sounds like the very antithesis to fun, Wongamania may prove otherwise. Inspired by Monopoly Deal, the game has already earned airtime on Channel NewsAsia’s Money Mind. This Kickstarter, however, is for the new international edition.

Of all the new features added, its modular system may just be the most notable. By including or excluding particular sets of cards, players can tune complexity according to the group’s playing level. The game board also has a reverse side now for extra variety.

Anyone who’s seen a fair share of shounen manga or anime would easily recognize the snake-like weapon this Japanese duo have developed. While the Ninja Track controller doesn’t quite extend and flex like a whip, feeling it snap back into a short sword is really fun, sort of like engaging a retractable baton.

The Unity game, ReelBlade, was made to demonstrate the Ninja Track’s capabilities. Players basically fish out a sea monster to duel using parries and strikes, although the controller did take some getting used to. Rather than being gentle, it’s best to treat it like an actual sword and use strong, sharp movements.

Ade thinks there's nothing quite like a good game and a snug headcrab. He grew up with HIDEO KOJIMA's Metal Gear Solid, lives for RPGs, and is waiting for light guns to make their comeback.
Previous post Steam Sales Have Changed, Daily and Flash Deals Gone
Next post Dusty Raging Fist Kickstarter Fails, Development Continues